Ralph Waldo Emerson visited England twice. The first unpublished in 1833, the second as a celebrated essayist in 1847. Here, from English Traits, Emerson gives his two-cents on The Times’ influence in Victorian society. 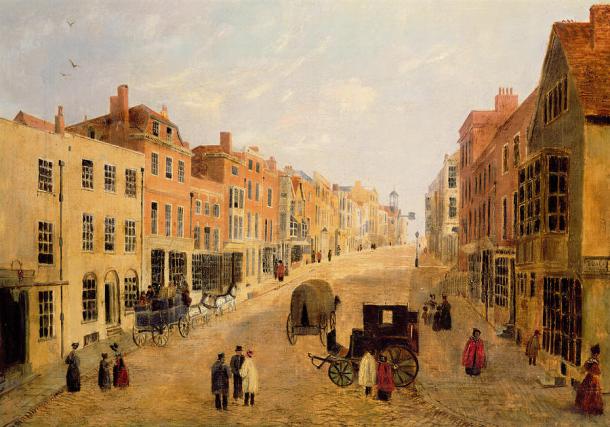 England is full of manly, clever, well-bred men who possess the talent of writing off-hand pungent paragraphs, expressing with clearness and courage their opinion on any person or performance. Valuable or not, it is a skill that is rarely found, out of English journals. The English do this, as they write poetry, as they ride and box, by being educated to it. Hundreds of clever Praeds, and Freres, and Froudes, and Hoods, and Hooks, and Maginns, and Mills, and Macaulays, make poems, or short essays for a journal, as they make speeches in Parliament and on the hustings, or,as they shoot and ride. It is a quite accidental and arbitrary direction of their general ability. Rude health and spirits, an Oxford education, and the habits of society are implied, but no a ray of genius. It comes of the crowded state of the professions, the violent interest which all men take in politics, the facility of experimenting in the journals, and high pay.

The most conspicuous result of this talent is the Times newspaper. No power in England is more felt, more feared, or more obeyed. What you read in the morning in that journal, you shall hear in the evening in all society. It has ears every where, and its information is earliest, completes, and surest. It has risen, year by year, and victory by victory, to its present authority. I asked one of its old contributors, whether it had once been abler than it is now? ‘Never,’ he said; ‘these are its palmist days.’ It has shown those qualities which are dear to Englishmen, unflinching adherence to its objects, prodigal intellectual ability, and a towering assurance, backed by the perfect organization in its printing-house, and its world-wide net-work of correspondence and reports. It has its own history and famous trophies. In 1820, it adopted the cause of Queen Caroline and carried it against the king. It adopted poor-law system, and almost alone lifted it through. When Lord Brougham was in power, it decided against him, and pulled him down. It declared war against Ireland, and conquered it. It adopted the League against the Corn Laws, and, when Cobden had begun to despair, it announced his triumph. It denounced and discredited the French Republic of 1848, and checked every sympathy with it in England, until it had enrolled 200,000 special constables to watch the Chartists, and make them ridiculous on the 10th April. It first denounced and then adopted the new French Empire, and urged the French Alliance and its results. It has entered into each municipal, literary, and social question, almost with a controlling voice. It has done bold and seasonable service in exposing frauds which threatened the commercial community. Meantime, it attacks its rivals by perfecting its printing machinery, and will drive them out of circulation: for the only limit to the circulation of the Times is the impossibility of printing copies fast enough; since a daily paper can only be new and seasonable for a few hours. It will kill all but that paper which is diametrically in opposition; since many papers, first and last, have lived by their attacks on the leading journal.

The English like it for its complete information. A statement of fact in the Times is as reliable as a citation from Hansard. Then, they like its independence; they do not know, when they take it up, what their paper is going to say: but, above all, for the nationality and confidence of its tone. It thinks for them all; it is their understanding and day’s ideal daguerreotyped. When I see them reading its columns, they seem to me becoming every moment more British. It has the national courage, not rash and petulant, but considerate and determined. No dignity or wealth is a shield from its assault. It attacks a duke as readily as a policeman, and with the most provoking airs of condescension. It makes rude work with the Board of Admiralty. The Bench of Bishops is still less safe. One bishop fares badly for his rapacity, and another for his bigotry, and a third for his courtliness. It addresses occasionally a hint to Majesty itself, and sometimes a hint which is taken. There is an air of freedom even in their advertising columns, which speaks well for England to a foreigner. On the days when I arrived in London in 1847, I read among the daily announcements, one offering a reward of fifty pounds to any person who would put a nobleman, described by name and title, late a member of Parliament, into any county jail in England, he having been convicted of obtaining money under false pretences.

Was never such arrogancy as the tone of this paper. Every slip of an Oxonian or Cantabrigian who writes his first leader, assumes that we subdued the earth before we sat down to write this particular Times. One would think, the world was on its knees to the Times Office, for its daily breakfast. But this arrogance is calculated. Who would care for it, if it ‘surmised,’ or ‘dared to confess,’ or ‘ventured to predict’? No; it is so, and so it shall be.

The morality and patriotism of the Times claims only to be representative, and by no means ideal. It gives the argument, not of the majority, but of the commanding class. Its editors know better than to defend Russia, or Austria, or English vested rights, on abstract grounds. But they give a voice to the class who, at the moment, take the lead; and they have an instinct for finding where the power now lies, which is eternally shifting its banks. Sympathizing with, and speaking for the class that rules the hour, yet, being apprised of every ground-swell, every Chartist resolution, every Church squabble, every strike in the mills, they detect the first trembling of change. They watch the hard and bitter struggles of the authors of each liberal movement, year by year, – watching them only to taunt and obstruct them,  – until, at last, when they see that these have established their fact, that power is on the point of passing to them, – they strike in, with the voice of a monarch, astonish those whom they succor, as much as those whom they desert, and make victory sure. Of course, the aspirants see that the Times is one of the goods of fortune, not to be won but by winning their cause. ■

This extract is taken from Ralph Waldo Emerson’s travel memoir, English Traits, recounting his two visits to England in 1833 and again in 1847 – the first as a young unpublished writer, meeting the giants of English literature; the second as the celebrated author of Nature and Essays.