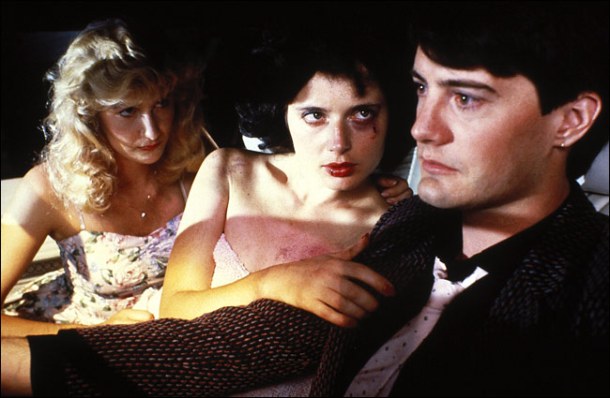 Throughout February, the BFI are celebrating the contemporary American filmmaker and visionary auteur, David Lynch. The curator of the season, Antony Todd, author of our new book Authorship and the Films of David Lynch, will be introducing the season at the National Film Theatre.

So, to get you all in the mood, some of us in the office have put together a little compilation of our favourite David Lynch moments. We didn’t go so far as to grow quiffs, but we have time-stamped some of the videos (dedication).

‘A dream of dark and troubling things…’ (David Lynch on Eraserhead)

‘Something about babysitting.’ This is how this horrifying filmic experience was rather carelessly described to me by a teenage friend  (this “friend” obviously hadn’t watched the film. We no longer speak.)  Considering babysitting – surely the quintessential cornerstone of the teenage girl economy – kept me financially solvent during the 90s (those oversized plaid shirts weren’t going to buy themselves), I thought  I would most probably relate to the central narrative. However, my expectations of something akin to The Babysitter’s Club meets My So-Called Life – a film that, coincidentally, needs to be made immediately – couldn’t have been more or more disturbingly off the mark.

The terrifying power of Eraserhead  comes, quite simply, from its uncompromising exploration of our most visceral fears. The horror of somehow gestating and hosting a monster, womblike, is masterfully imagined in Ridley Scott’s Alien films, but David Lynch draws on a tradition encompassing Frankenstein and Kafka to lay bare the male psyche and its response to the troubling act of creation through the everyman figure of Henry Spencer (who, interestingly, has very similar hair to Lynch himself – discuss). The fragile lines between reality and the imagined are blurred with catastrophic, paranoic results within an H. G. Wells-esque, post-apocalyptic industrial setting complete with heightened grinding machine noises, the constant flickering of lights and billowing clouds of steam. Within this nightmarish setting, the dream-like sequences of the film are all the more powerful because they are so controlled – at no stage does Lynch allow the slow black-and-white frames, montages or cacophony of noises to seem random or erratic. In some ways it’s this controlled artistry that makes the film. LT 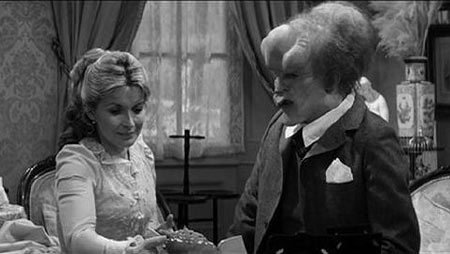 Like many American Literature postgraduates, I didn’t manage to walk straight into full-time employment, but rather got there after a long and arduous adventure with many de-tours and banal anecdotes. These days were not filled by watching David Lynch films, instead – after a morning of diligent job applications – I would venture into central London and take a leisurely stroll, familiarising myself to my new home. On one crisp winter’s afternoon, much like today, turning onto Goodge Street I saw John Hurt, winning the sartorial stakes in a grey herringbone overcoat. My reflex reaction to this was: ‘I am a human being!’  After Lynch’s surreal debut movie ‘about babysitting’ – Eraserhead – The Elephant Man is sentimental and mawkish in comparison – but then, what isn’t? With John Hurt’s portrayal of John Merrick, Anthony Hopkins’ Dr. Treeves and Hannah Gordon as Ann, Treeves’ wife, the performances in this film are unrivalled – it took Robert De Niro’s Jack La Motta in Raging Bull to pip John Hurt for the 1981 Best Actor gong at the Oscars. And if all this heavy-weight thesping wasn’t enough, John Gielgud and Anne Bancroft rear their heads along the way, just leaving enough time for you to drawer another breath before the appearance of Boon’s Michael Elphick. TA 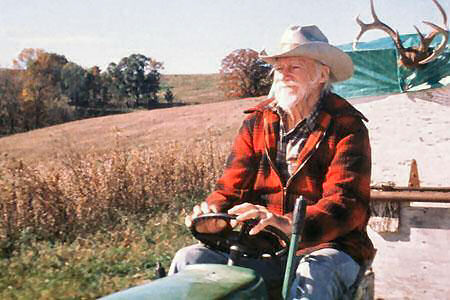 This is just the most wonderfully paced, beautifully shot and heartbreaking film. It’s the story of Alvin Straight, who heard his estranged brother was ill, and set off on his lawnmower across America to see him before it was too late. The space and the colours of American country are wonderful – it was made at the end of the millennium, and I often wonder whether that America still exists. This film understands that that’s the thing we all really love about America, the space. Richard Farnsworth is extraordinary as Alvin, a performance of few words but incredible power, which slow-burns throughout. The soundtrack soaks in the very long, panoramic takes; it’s a film which lets us breathe and is all the more moving for it. David Lynch has always been interested in America above all, and it turned out Walt Disney, who produced this film, were the perfect studio for him. TH 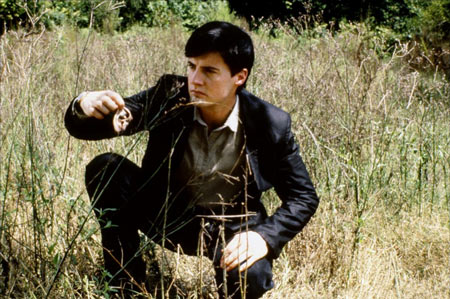 Ah, the evil that lurks beneath the glossy, sunshine-saturated surfaces of suburbia. Lynch doesn’t exactly ‘explore’ the dark underbelly of the middle-class American dream because from the moment that Kyle Machlachlan’s naive protagonist Jeffrey Beaumont finds a severed ear in the street, the events that are set in motion are as inexplicable as they are unstoppable. We never find out who Isabella Rosselini’s sexually-martyred character is, nor the reasons she is so horrifically abused by Dennis Hopper, an embodied principle of evil whose origins and motivations remain obscure, a twentieth-century demon complete with sulphur and brimstone in the form of the mysterious gas he sucks down voraciously. Still, Rosselini’s enigmatic allure and Hopper’s satanic energy are more vital and perversely life-affirming than anything in Beaumont’s sanitised existence, and like him the audience becomes a voyeur, desperate to catch another horrifying glimpse of this hideous peep-show, with Hopper’s Frank Booth a tour guide to a world of abjection and aberration.

The intrusion of sex and violence into the saccharine existence Jeffrey inhabits with high-school sweetheart Laura Dern can in the end only be controlled through repression, wilful ignorance and turning a blind eye to the suffering embodied by the naked, bleeding Rosselini. After Dern gives a artless, thoroughly dull all-American speech invoking ‘love’ as the force that will save the world, the film ends with the lovers gazing blissfully at an obviously synthetic robin in the trees outside their window, choosing to ignore the gruesome, seething forces of sex and violence that power their hollow and contrived existence. The conspicuous artificiality of the robin, so unreal, so lacking in earthliness pierces the heart of what the film is about: reality, Lynch suggests, is both ungraspable and unbearable. LT & HW

‘And there you were, lying in bed, but it wasn’t you.’

It’s when she turns over in the bed and has a luminous green reptilian face that the fear thitherto unseen becomes suddenly embodied. Lynch brings dark forces into physical form in the seedy nightmare worlds he dribbles about the screen. Comparisons with reality are pointless or too many vanishing points like puppet strings quickly tangle perspective: where were you when the VHS now in the envelope on the doorstep was being filmed? Did you film it? How did they get in? How will we get out? Ominous drone music unreasonably inhabits the desert. In every motel there is a grotty evil drone music – courtesy of long-time Lynch collaborator Angelo Badalamenti – emanating from a possible exquisite corpse that we will all migrate to in the end. Dick Laurent. Is dead. Death isn’t so much a state, or non-state, as an object, a troubling detail that inhabits dingy and inexplicable rooms where phones ring into the void. Answering brings the end of the dream, possibly more terrifying than what this reality has become by now. Again sexual dysfunction and that white-faced man who scrawls out of a cocktail party and is somehow the desert hut with associative ominous drone. Does the road itself only appear at the beginning? At least Lynch understands that life has no narrative, death no explanation and the between-place as a thing we must study very carefully. DH