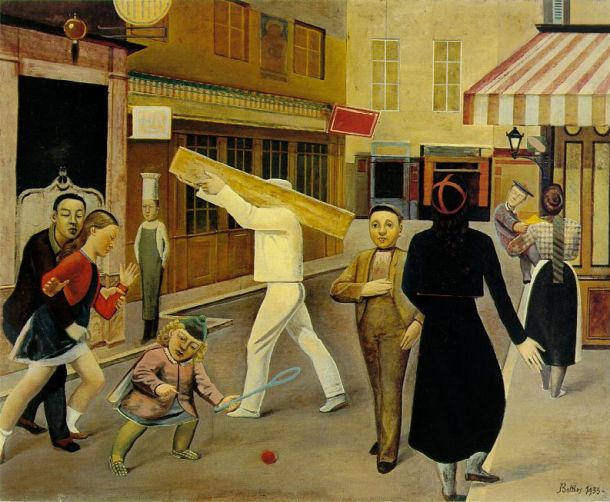 In 1968, the Tate Gallery were planning and organising a retrospective of Balthus’ work, when suddenly a telegram arrived. It read: ‘NO BIOGRAPHICAL DETAILS. BEGIN: BALTHUS IS A PAINTER OF WHOM NOTHING IS KNOWN. NOW LET US LOOK AT THE PICTURES. REGARDS. B.’

Throughout his career Balthus resisted attempts by others to build a biographical profile of himself, insisting his painting alone should suffice. Therefore, to respect Balthus’ wishes I’m not going to provide any autobiographical detail, but  will instead direct you to his Wikipedia page (Mwah-ha-ha).

Stylistically, La Rue is both cartoon-like and primitive; with little respect given to perspective or three-dimensionality, the figures resemble those of a tableau vivant. Frozen mid-movement, none of the characters seem to notice the aggressive sexual struggle underway at the painting’s far left. For Balthus, a crowded street – in this instance anyway – is an uncanny site of mental isolation and sexual taboos.

French philosopher and theorist Felix Guattari was also particular interested by La Rue, and it was the focus of his essay, ‘Cracks in the Street’, to help explain his concept of molar and molecular identity. For Guattari, we engage with works of art on both a molar and molecular level. On the one hand, we react to concepts such as history, cultural meaning and semiotics (molar), and on the other hand we experience a kind of non-linguistic affect that differs from person to person and from viewing to viewing (molecular). Vitally, neither of these two layers of understanding should take precedence over each other. Both the molar and the molecular contribute to what he calls the ‘irreducible polyclivity of the expressive components concurring in the production of an aesthetic effect’ – to you and I, the full complexity of what it means to view and experience a painting or visual image.

For more on Guattari’s insights into Balthus’ La Rue, and if you can permit a plug, I recommend you read this extract from Paul Elliott’s new book, Guattari Reframed. ■ TA