In Louisa May Alcott’s Little Women, Jo March goes crazy for a novel called Undine. But what is it, and who is it by? Thomas Ruys-Smith goes digging for answers. 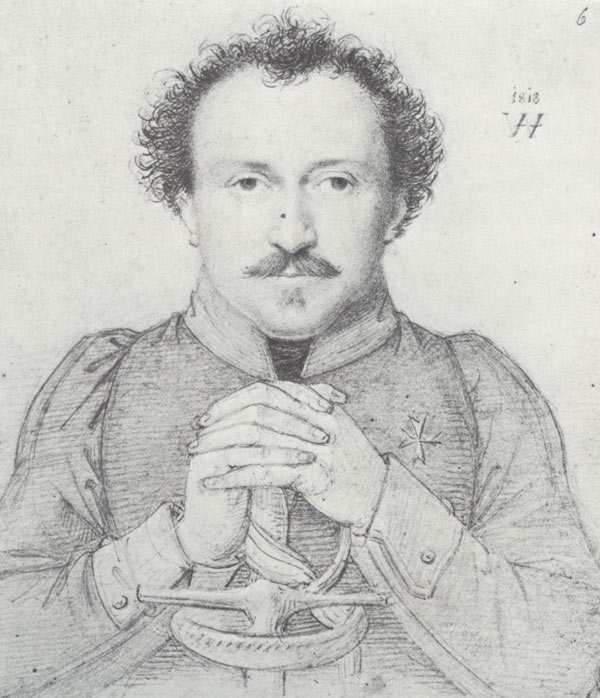 I must have perused the opening passages of Louisa May Alcott’s Little Women (1868-9) a good handful of times by now, and every time one moment has given me pause.

Later in the book, Jo gets her wish. And the book – or, at least, Sintram – appears again in Jo’s Boys (1886), and is particularly associated with the character of Dan:

Undine and Sintram? Who or what might that be? I decided to do a bit of digging.

The texts that Jo March longs for, acquires, and then passes on to her children are the creation of Friedrich de la Motte Fouqué, a German romantic (pictured above) who published most of his works in the early nineteenth century. In Undine, first published in 1811, a water sprite marries a knight. In Sintram, a knight undertakes a semi-allegorical quest. And since it appears, at the moment, that all my roads of enquiry lead back to Walter Scott, I was pleased to find that, in 1845, the American Review declared unabashedly, ‘Fouqué is the German [Walter] Scott, with a higher sense of the ideal, a finer feeling of the beautiful, and a greater delicacy of execution.’ Certainly, the two men seem to have been linked together, not least because of their historic and chivalric concerns. The preface to this 1845 American edition of Undine and Sintram (translated by the Rev. Thomas Tracy, also American), quotes Coleridge’s judgement:

Scott himself was also quick to pay compliment:

As such quotations suggest, the works of de la Motte Fouqué had a prominence in literary culture – both English and American – that has all but vanished, which hints at the importance of German romance in the first half of the nineteenth century. For example, Longfellow expressed his admiration for his works; Emerson owned this 1824 American edition of his Peter Schlemihl; Poe reviewed, favourably, an 1839 translation of Undine; and, perhaps most revealingly, Elizabeth Peabody, Bronson Alcott’s teaching associate, translated some of de le Motte Fouqué’s stories.

For Alcott, certainly, these stories seem to have held a special resonance. In Madeline B. Stern’s life of Alcott, she makes explicit reference to the copy of Undine that belonged to Elizabeth Alcott, Louisa May’s sister and the model for Beth in Little Women, who died in 1858. And a quick trawl through Google Books shows that, alongside the incidents mentioned above, Alcott referred to Undine and other works by de la Motte Fouqué repeatedly. I think I’ll put Undine and Sintram on the summer reading pile. ■

Further reading:
This article by Karen Sands-O’Connor for American Transcendental Quarterly explores the significance of Alcott’s use of de la Motte Fouqué’s stories in Little Women.

Dr Thomas Ruys Smith is an academic and writer working in a number of research areas focused around the Mississippi River. He is the author of River of Dreams: Imagining the Mississippi Before Mark Twain (Louisiana State University Press, 2007), Southern Queen: New Orleans in the Nineteenth Century (Continuum, 2011), and editor of Blacklegs, Card Sharps and Confidence Men: Nineteenth-Century Mississippi River Gambling Stories (Louisiana State University Press, 2010). His new book, Must Read: Rediscovering American Bestsellers from Charlotte Temple to The Da Vinci Code, co-edited with Prof. Sarah Churchwell, will be published by Continuum in August. He blogs about nineteenth century America at American Scrapbook.