Frances Underhill / Painting of the Week 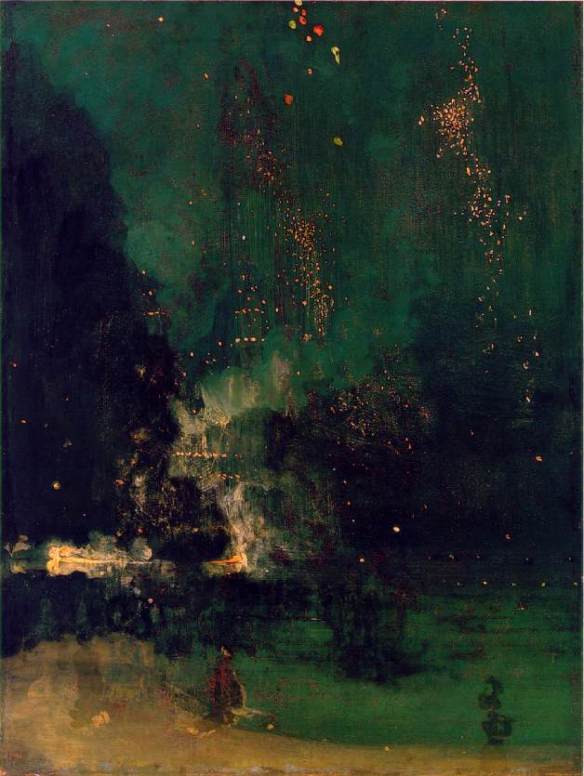 Nocturne in Black and Gold, The Falling Rocket inspired one of the most famous lawsuits in art history, Whistler vs. Ruskin. The painting reached notoriety after John Ruskin, the leading art critic of the time, attacked Whistler after having seen it on display at the Grosvenor Gallery, saying he had ‘never expected to hear a coxcomb ask two hundred guineas for flinging a pot of paint in the public’s face.’ The suggestion that his art was worthless drove Whistler to sue Ruskin for libel, calling his words ‘most debased style of criticism I have had thrown at me yet’.

The case was heard in 1878 and the trial became a media event, a struggle between two giants in Victorian London. Many figures from the London art world gave evidence, and it led to discussions on the meaning and value of art both in the newspapers and the court, where they argued about the rights and duties of critics and the role of workmanship in art.

On the one side, Ruskin believed that art should have a moral force, some didactic purpose. He showed Titian’s portrait of Doge Andrea Gritti to the jury as an example of the highest finish of ancient art, and criticised Whistler’s painting for looking incomplete. On the other, Whistler’s side made the argument that is now familiar, that the painting was ‘art for art’s sake’, as Whistler emphasised tonal qualities, structure and harmony, rather than a narrative, and saw the artist’s obligation as being to interpret what he saw. Whistler gave an amazing defence of his prices when being cross-examined by Ruskin’s lawyer, Sir John Holker:

Holker: ‘Did it take you much time to paint the Nocturne in Black and Gold? How soon did you knock it off?’

Whistler: ‘Oh, I ‘knock one off’ possibly in a couple of days – one day to do the work and another to finish it…’

Holker: ‘The labour of two days is that for which you ask two hundred guineas?’

Whistler: ‘No, I ask it for the knowledge I have gained in the work of a lifetime’

Unfortunately, although the jury reached a verdict in favour of Whistler, he was awarded only token damages of one farthing, and the case resulted in his bankruptcy. Whistler’s expectation that the publicity of the trial would rescue his career fell flat, as patrons avoided him for years to come, and the painting, which had been brought into the court upside down and ridiculed in the press, was unsalable for some time. Eventually, however, he had his revenge, by selling the offending painting for £800 – about four times what Ruskin had said it was not worth. FU