Much like a funfair, does Berlin now only retain an illusion of edginess? 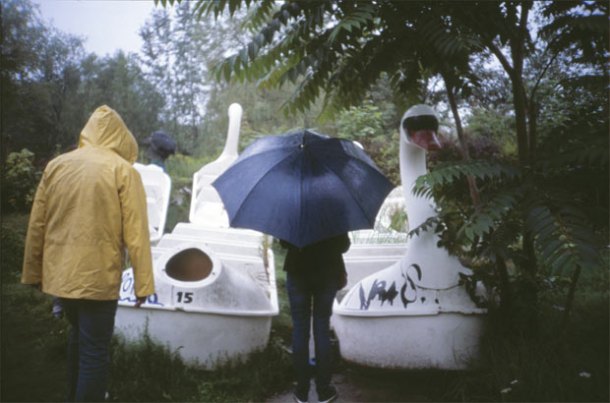 Berlin is a shocking and provocative city, yes?  People here live on the edge, redrawing social and artistic boundaries. In its clubs, studios and communes, Berliners strive to build a new model for urban living. True, or false?

In fact over the last 70 years Berlin has grown to be a model for safe living. No one in their right mind chose to live here in 1945, and during the decades of the Cold War, when West Berlin was surrounded by a hundred thousand Red Army soldiers, few folks wanted to settle in a city which might be vaporised by a surprise Soviet nuclear attack.

But with the collapse of Communism, and the fall of the Berlin Wall, all that changed.  Techno activists stormed across the Spree to Ostkreuz and Friedrichshain, improvising new clubs in abandoned basements and warehouses, drawing together young people from both sides of the old divide. In the reunited city, clubbers danced beneath the death strip which had once separated them. Berlin retained its edginess and sense of mystery – yet it became safe.

Among the most changed and changing places was the Spreepark, once the only amusement park in the Communist East. After 1989 the place hobbled along for about a decade before the owners declared themselves bankrupt and shipped its six biggest attractions to Peru. Two years later one of them was arrested for attempting to smuggle 180 kilos of cocaine back to Germany in the masts of the Flying Carpet Ride.

On the green banks of the Spree, the abandoned and forgotten park became a magical wasteland, filled with overgrown goose boats, toppled concrete dinosaurs, a beached pirate ship and noisy frog colonies in the log flume ride. As late as 2011 urban explorers and local graffiti artists scaled the fences to embark on nocturnal adventures. The top thrill – apart from avoiding the thuggish Schöneweide security guards – was to ‘ride’ the rotting ferris wheel which turned idly in the breeze. When the wind dropped, joy-riders could be stranded for hours high above Berlin.

In a way the Spreepark illustrates the greater changes taking place in central Berlin: vacant lots are vanishing, property prices are on the rise, investors are pouring cash into bricks and mortar. The only threat that the Russians now pose is that they’ll buy up all the new, high-density ‘luxury’ developments. At night the city’s streets are safer than they have ever been, perhaps safer than any other European capital. Last weekend the Berliner Morgenpost trumpeted the town’s popularity and safety by declaring it to be a tourism ‘superpower’.

Much like a funfair, this new Berlin wants to retain only an illusion of edginess, so as to add a frisson for residents and visitors alike. Yet in historical terms, Berlin has never failed to shock the world – for better and worse. Even as the capital grows safer, and more predictable, one can trust in its ability to surprise. ■

Image of the abandoned Spreepark courtesy of Piri.

Rory MacLean is a travel writer and author of the UK best-sellers Stalin’s Nose, Under the Dragon, and Falling For Icarus. This article was originally published on Rory’s blog Meet the Germans.