It may seem cliché, but Charlie Chaplin’s mother provided him an almost infinite source of raw material to fashion into comic and sentimental themes.

As a serio-comic Hannah Chaplin made only a minute impact on the world of British music hall. As a mother, however, she was a major influence on the silent cinema’s most famous comedian.

During the countless hours spent in barely furnished garrets and basements in and around the Kennington Road Hannah acted out scenes from popular plays and sung songs that she had heard on the music-hall stage. Often she would attempt to analyse the performances of actors and singers. Charlie remembered her recreating scenes from plays, particularly the biblical epic The Sigh of the Cross in which she alternatively portrayed the Christian virgin Mercia and the religious convert Marcus (as played by the diminutive author of the play Wilson Barrett). Another of Hannah’s favourite scenes involved Napoleon Bonaparte. Playing the emperor she stood on tiptoes to select a book from a library shelf. Switching to the role of Marshal Ney she offered to reach the volume because, as he diplomatically put it, he was ‘higher’. ‘Higher?’ responded Napoleon with an indignant scowl – ‘Taller!’.

As well as explaining stage technique Hannah drew Charlie’s attention to the distinctive body language of neighbours, explaining how it might reveal mood and emotion. Confined to home by poverty and her own deteriorating mental state she spent hours gazing through the window at passers by in the street outside. Although hers was a withdrawal motivated by defeat, the sharp focus she exercised on the outside world was to have a stimulating effect on her two sons. Sydney, Charlie’s older half-brother, recalled:

Mother is the one who made Charlie a successful mimic. When we were little boys living in bitter poverty in London mother used to brighten the drab days for us. She would point out, for instance, the incongruous manners of the old chap who worked in a laundry and who took his best suit out of pawn on Saturday night, to meet his ‘Moll,’ and bright and early would pledge it again.

‘Look at him,’ mother would say. ‘He’s walking way out near the kerb for fear of getting his suit dirty and losing a shilling on the pledge. Now, watch him, he’s not used to gloves and he wants to put his hands in his pockets.’ And the next day Charlie would have a perfect imitation of the laundryman for mother’s approval.

There are unfortunately no illustrations of Hannah in any of her stage costumes. A series of photographs taken by ‘Charles’ of Belfast in 1886 must now be considered lost. Although there are fewer references to Hannah’s performances in the theatrical press than to her sister Kate or ‘Dashing’ Eva Lester, there is sufficient evidence to arrive at a reasonable idea of her music-hall act. It seems that even without laryngitis her style would not have been suited to the rough-and-ready Aldershot Canteen. Hannah did not ‘dash’ or ‘romp’. Her songs may well have made reference to kissing and squeezing, but they did not dwell on salacious detail, for, as The Era observed: ‘Miss Lily Harley’s [as was her stage name] songs are rendered with great taste and her dancing is both graceful and refined.’ Her style was relatively sophisticated, intended to cajole rather than cudgel her audience: ‘We must not forget to mention the appearance of Miss Lily Harley, a young lady who sings coquettish ballads with much grace and archness of manner, and is extremely well received.’

There was another factor militating against her ultimate success: she did not possess the vocal power to command a large theatre. That her voice was pleasant, but not powerful might be implied by the comment: ‘Next comes Lily Harley who has a very pleasing voice’. The Stage’s verdict on her appearance at the Star, Glasgow in 1886, ‘a clever and graceful little lady’, encapsulates her problems in becoming a major turn. Cleverness and grace in someone as slight as Hannah were easily appreciated in an auditorium seating under a thousand, but were far less impressive in the new, larger music halls that increasingly employed the leading acts.

Most of Hannah’s performances took place in the smaller provincial and metropolitan halls. At these her success or failure lay largely in her own hands. She probably exercised greater control than most performers over the content of her act, for her early employment had provided her with the expertise to produce her own stage costumes, while she also appears to have been a capable songwriter (unusual in a male-dominated profession). Chaplin recalled her singing one of her own compositions:

I remember her donning a judge’s wig and cap and gown and singing in her weak voice one of her successes that she had written herself. The song had a bouncy two-four tempo and went as follows:

I’m a lady judge,
And a good judge too,
Judging cases fairly –
They are so very rarely –
I mean to teach the lawyers
A thing or two,
And show them just exactly
What the girls can do . . .

With amazing ease she would then break into a graceful dance and forget her dressmaking and regale us with her other song successes and perform the dances that went with them until she was breathless and exhausted.

‘The Lady Judge’ was to prove a long-term hit for her sister on the halls and, in 1892, Hannah provided Kate with another song, ‘My Lady Friend’, writing an indignant letter to the editor of The Encore when the comedian George Byford sang a number with the same title three years later.

The only known portrait of Hannah Chaplin.

Charlie Chaplin’s childhood memories, or at least those he chose to record, were of his mother as an unlucky, ill-used woman desperately struggling to keep her young family together. Unlike Charles Chaplin (Charlie’s father) and his mistress Louise, My Autobiography contains no references to Hannah drinking, and of other vices there is just a single mention of her gambling on horses. Only once does Charlie recall his mother swearing, calling a supercilious woman ‘Lady Shit’. And yet, despite her saintly demeanour, there was something about Hannah that caused three men to abandon her and led to her own sister ignoring her plight for long periods of time.

In 1898 Hannah was committed to Cane Hill Asylum where her violent outbursts resulted in confinement in a padded cell. On 12 Septmeber a doctor reported that she was ‘[s]houting, singing and talking incoherently… Says she wants to get out of the world.’ Charlie felt that his mother had abandoned him in favour of insanity. My Autobiography opens with Hannah on the verge of a breakdown telling young Charlie to ‘run along to the McCarthys’ and get your dinner – there’s nothing here for you’. Later in the book he recorded his feelings about her illness:

Why had she done this? Mother, so light-hearted and gay, how could she go insane? Vaguely I felt that she had deliberately escaped from her mind and had deserted us. In my despair I had visions of her looking pathetically at me, drifting away into a void.

By his early teens, if not before, Charlie must have acquired some knowledge of his mother’s complicated sexual history. He had always been aware that he and his brother  Sydney had different fathers and it is hard to believe that Sydney would not have spoken of the relationship that had existed between Hannah and Leo Dryden (Hannah Chaplin and Leo Dryden’s affair, and the son they had together, led to the breakdown of her marriage to Charles Chaplin, Sr. The couple split up and the child was kept by Dryden, precipitating Hannah’s bouts of mental illness), and the rumours of prostitution to supplement her meagre income.

Whatever Charlie’s feelings were towards his mother, her memory provided him with an apparently infinite source of raw material to fashion into comic and sentimental themes in many of his films. Through her efforts during their early years together, Hannah Chaplin succeeded in bequeathing one vital gift to her son. Charlie explained:

If it had not been for my mother I doubt if I could have made a success of pantomime. She was one of the greatest pantomime artists I have ever seen . . . it was through watching and listening to her that I learned not only how to express my emotions with my hands and face, but also how to observe and study people.

Such lessons in imitating the world around him provided Charlie with the means to explore and, through such a process, to exculpate his bleak and painful heritage.

Seperated for over twenty years, and after protracted negotiations with US immigration officials, Hannah travelled to Hollywood in 1921 where she was reunited with Charlie and Sydney, both of whom had become film stars in the intervening years. On landing in the United States she apparently sang a selection of songs from Patience, backing up Charlie’s assertion that she had once been a star of Gilbert and Sullivan opera. It was said that she was suffering from a nervous condition resulting from wartime Zeppelin raids on London no cover up any mention of her long-term mental illness. Some time later she was visited by her other son, Wheeler Dryden, who had made contact with his half-brothers after 23 years. Hannah’s final days were spent in a comfortable home in the San Fernando Valley. ■ 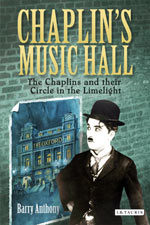 Barry Anthony is a historian who specialises in the Victorian and Edwardian period. His new book, Chaplin’s Music Hall, tells the story of Chaplin’s family history, their music-hall circle, and how it inspired his genius. The book also includes a foreword by Chaplin’s son, Michael Chaplin.