Halloween might have started life as an Old World custom, but when I was growing up in the United Kingdom in the last decades of the twentieth-century it existed as little more than the ghost of a folk memory or a (very) pale importation of American celebrations.

As Lucy Mangan put it in The Guardian recently, ‘I didn’t see a pumpkin until I was 21, in the garden of a posh friend from university.’ But that didn’t stop me from being a keen observer of the glimpses of Halloween that filtered back across the Atlantic through various branches of popular culture. There, too, I was pleased to discover I was in good company. As Neil Gaiman described in the New York Times in 2006:

When I was growing up in England, Halloween was no time for celebration […] I did not believe in witches, not in the daylight. Not really even at midnight. But on Halloween I believed in everything. I even believed that there was a country across the ocean where, on that night, people my age went from door to door in costumes, begging for sweets, threatening tricks.

This year, I decided to combine this long-held fixation with my day-job (lecturer in American Studies), and take a look at the ways in which Halloween was marked (or, at least, written about) in nineteenth-century America. For the last month on American Scrapbook I’ve been taking part in the annual Countdown to Halloween blogging marathon, digging deep into nineteenth-century popular literature looking for Halloween-themed material. What I soon discovered was that, at least when it comes to Halloween, the past is another country, and they do things differently there. For much of the nineteenth-century you can look in vain for ghost stories or pumpkins or, in fact, any of the iconography that we immediately associate with a contemporary Halloween. Indeed, when it came to a holiday associated with spooky tales, it was Christmas, not Halloween, that had cornered the market. As Jeffrey Weinstock explains in Scare Tactics: Supernatural Fiction by American Women, Charles Dickens seems to have ‘forged a link between ghost stories and the Christmas season through the publication of A Christmas Carol in 1843’, as well as through his ‘advocacy of supernatural tales in his role as editor and author of Christmas annuals.’ [1]

But that’s not to say that Halloween didn’t have its own, rather persistent, set of associations in the nineteenth-century. And to gain a proper appreciation of the antiquarian traditions of All Hallow’s Eve, we first have to dip back into the eighteenth-century. Robert Burns’ evocation of ‘Halloween’ (1785) provides a definitive account of what Halloween meant, on both sides of the Atlantic, in the late eighteenth and early nineteenth-century. First, Burns establishes the supernatural reputation of the day: Halloween, he explains, ‘is thought to be a night when witches, devils, and other mischief-making beings, are all abroad on their baneful, midnight errands.’ But the meat of the poem itself is actually devoted to the wide variety of ‘charms and spells of that night, so big with prophecy to the peasantry in the west of Scotland.’ To be specific, Halloween-night was devoted to love spells, designed to reveal the name or face of future spouses. Though these popular fortune-telling traditions might have completely fallen away today, they absolutely dominate the stories of Halloween that I’ve uncovered in the first half of the nineteenth-century. Timothy Shay Arthur’s short story from 1849, ‘Love Tests of Halloween’, is, as the title suggests, a perfect example of the type (which also, as it goes, directly references Burns’ poem). Arthur also expresses two other important things about the day at mid-century: first, perhaps unsurprisingly, that the celebration was popularly associated with Scotland (and Ireland); second, that the observance of the day was seen as something which was falling further and further into abeyance. 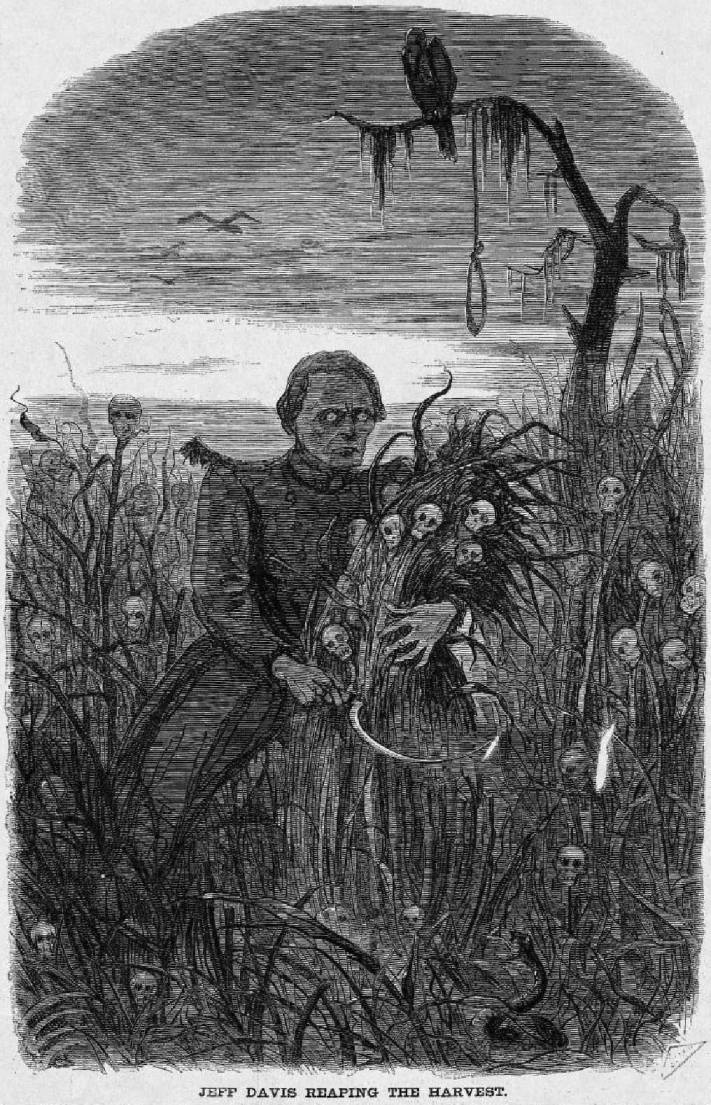 Though this association with love spells can be followed throughout the century, it’s clear that a shift in the prominence and emphasis of Halloween followed the American Civil War (1861-1865). As Ronald Hutton describes in The Stations of the Sun: A History of the Ritual Year in Britain, the apparent reinvigoration of Halloween in America at this moment has been linked to ‘large-scale Irish immigration’ in the wake of the Great Famine, ‘bringing an intensive observation of the festival with it.’ [2] And some literary evidence for this can be found in Charles James Cannon’s 1855 novel, Bickerton; or, The Immigrant’s Daughter, which describes the Halloween festivities of the ‘Little Dublin’ neighbourhood in Boston as ‘a custom of heathen times’, accompanied by ‘superstitious practices’, which was nonetheless a day of ‘mirth […] to which the young had looked forward for months.’ Alongside that narrative of cultural importation, the resurgence of Halloween also fits with the growing fascination with, and nostalgia for, local customs and folk traditions that was profoundly felt in American culture after the Civil War.

Bit by bit, a more recognisable Halloween culture emerges. In 1860, the year before the Civil War, we find the phenomenally popular writer E. D. E. N. Southworth publishing ‘The Spectre Revels’, a haunted-house story set on Halloween. In 1865, the Brooklyn Daily Eagle published a Halloween-themed parody of the poem ‘A Visit from St. Nicholas’ – better known as ‘Twas the Night Before Christmas’ – in its October 31st edition (available here):

‘Twas the night of All Hallows, when goblin and sprite,
Were to roam, it is said, on that terrible night.

By the closing decades of the century, the major literary journals were all regularly running Halloween-themed stories in October (see, for example, William Black’s ‘A Halloween Wraith’ from Harper’s New Monthly Magazine in 1890, or Hezekiah Butterworth’s ‘A Halloween Reformation’ from the Century Magazine in 1894). By 1905, Kindergarten Magazine was recommending to teachers that, ‘A few October days should be given to the spirit of Halloween. Then, if at any time, may fun and frolic reign.’

That same trajectory can be confirmed with reference to Google Book’s new Ngram viewer, which allows you to search for the preponderance of a word or term across the entire corpus of their scanned archives. The graph below represents the use of the word ‘Halloween’ from 1800-2000 (original here):

A relatively small but significant up-swing in the use of the word is clearly visible after about 1860. But then again, it’s also clear that that’s as nothing compared to the rise and rise of Halloween after the turn of the century. Whichever way you look at it, it seems clear that what we recognise as Halloween today is firmly a product of the twentieth-century. Still, the roots of this potent cultural tradition can be found, somewhere, in these ephemeral fragments of Halloween past. And who knows – maybe love-spells are due for a revival? ■

Dr Thomas Ruys Smith is Senior Lecturer in American Literature and Culture at the University of East Anglia. His new book, Must Read: Rediscovering American Bestsellers from Charlotte Temple to The Da Vinci Code, co-edited with Prof. Sarah Churchwell, is out now. He blogs about nineteenth century America at American Scrapbook.