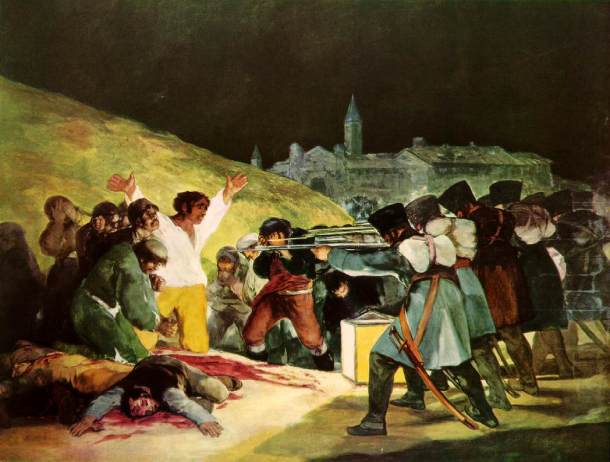 Every year as Remembrance Sunday looms, articles in newspapers about the politics of wearing a poppy grow as more and more people opt out. Public figures that don’t wear one are often treated with disdain, but the opinion that it has become a tainted symbol that somehow represents an unthinking militarism seems to be gaining favour. Either way, when 11 November comes around, most people unite with a quiet dignity to remember those that have sacrificed their life and suffered in combat.

In terms of depicting the horror of war, Goya’s The Third of May 1808 – which commemorates Spanish resistance to Napolean’s armies during the occupation of 1808 in the Peninsula War – is a game-changer. There’s no glory or honour in this scene; the martyrs are as anonymous as the killers. Heroism is not found in the individual; instead it exists within a continuum of victims. Goya’s achievement is that subject and method are in synthesis: the brutality of the scene is not compromised by technique, colour or theatricality, and in its earthy tones and religious symbolism, it is easy to see how its influence loomed large in the making of Picasso’s Guernica. TA