To F. Scott Fitzgerald’s disbelief,  Richard Halliburton follows in the footsteps of Leander and Lord Byron by swimming the legendary and romantic Hellespont.

In 1927, Richard Halliburton sent F. Scott Fitzgerald a copy of his bestseller The Glorious Adventure. Writing back, Fitzgerald jokingly replied – ‘I hope this will reach you before you disappear into Brooklyn to imagine and write another travel book – because don’t think I really believe you’ve been in all these places and done all these things like you say.’

We all have our dreams. Otherwise what a dark and stagnant world this would be. Most of us dream of getting rich; many of us of getting married; and some of us of getting unmarried. I’ve met people whose great dream it was to visit Jerusalem, or Carcassonne, or to look upon the seven hills of Rome. I’ll confess to a sentimental life-long dream of my own, – not of riches, or weddings, or Jerusalem, however – something far less reasonable than that. I’ve dreamed of swimming the most dramatic river in the world – the Hellespont. Lord Byron once wrote that he would rather have swum the Hellespont than written all his poetry. So would I!

Sometimes, once in a long, long while, sentimental dreams come true. Mine did, and it was as colourful and satisfying as all my flights of fancy had imagined it would be. To me the Hellespont was not just a narrow strait of cold blue water, discharging the Black Sea and the Sea of Marmora into the Aegean. Far more than that: it was a tremendous symbol – a symbol  of audacity, of challenge: of epic poetry, and heroic adventure.

The nature of all the Hellespont’s first records seem to have set an example for all the historic events that have clustered about it. Its very naming is a dramatic story. The name of ‘Hellespont’ (‘Dardanelles’ on the modern maps) goes back to legendary ages, receiving its title from ‘Helle,’ the King of Thessaly’s daughter who fell into the channel from the winged ram with the golden fleece, on whose back she was fleeing her enemies.

Through this same Hellespont, Jason in his immortal ship, the Argo, sailed in quest of this same fleece. For ten years, from 1194 to 1184 B.C., the fleets of the Greeks were beached at its entrance, while their armies, led by Agamemnon, Achilles and Ulysses, thundered at the lofty walls of Troy. It was across this stream that Leander nightly swam to keep his clandestine trysts with Hero. In the very wake of Leander, in one of the most spectacular military exploits in history, King Xerxes of Persia, the mightiest ruler of his time, crossed from Asia to Europe with a colossal army for the invasion of Greece. Here in the following century Alexander the Great ferried his Macedonians from Europe to Asia to begin his conquest of the World. Back once more in the fourteenth century rolled the tide of invasion from east to west: this time the Turkish conquests that were to turn the Hellespont from that day to this into Saracenic property. Through this strait the piratical Turkish cruisers moved for generations, making all the eastern Mediterranean a Turkish lake. Since 1600 Russia has fought periodic wars for the possession of this channel. And now the shores of the same Hellespont are dotted with the wrecks of sunken Allied battle fleets and strewn with the graves of a hundred thousand French and English soldiers, whose blood was squandered in rivers in the desperate attempt in 1915 to plant Allied flags over the rocks where Hero joined her drowned romantic lover, Leaner, in antiquity. Indeed one’s spirits surge to read the amazing record of this fateful stream and realize how repeatedly it has shaped the destiny of the world.

This, then, is the Hellespont, and the scene where my dream came true.

I removed my clothing, and, my heart pounding with excitement, stood at the water’s edge praying to the water gods to deliver me safely on the other side. The summer sunshine blazed from a cloudless sky upon the sinister, sapphire stream that lapped invitingly at my feet. With the nerves keyed up to the highest pitch, I yet held back in fear lest I fail. Despite the fact that Xerxes had scourged the Hellespont with the chains in punishment for having destroyed his bridge of boats, I knew its beautiful, villainous waters had not been humbled. Here was my Siren Dream, beckoning to me. This was the Great Hour. I recalled a similar moment, in Japan, when on a zero January morning I faced the iceberg of Fujiyama at the timber line, ready to plunge up the glassy slopes to the blizzard-swept summit. Again, and stronger, came the spiritual exultation, the sudden strange pulse of power that makes cold chills of courage race through one’s blood. My body whispered: ‘You cannot possibly swim five miles in such a current,’ but Inspiration shouted: ‘This is the Hellespont – what matter if it’s fifty?’

The Asiatic shore across the channel rose hazily. I struck out straight for it, with Roderic and the boat hovering close beside.

Before I had gone half a mile, whatever ‘form’ I may have begun with soon vanished, and I thought only of covering the greatest possible distance with the least possible exertion: back-stroke, side-stroke, dog-paddle, idle floating, any old thing to keep going. A big Greek steamer bore upon us, rushing furiously down-stream. It was our place to get out of the way. The officers on the bridge, not seeing me in the water, made frantic gestures. To protect me our sailboat stood its ground in the very path of the oncoming ship, and the steamer had to take a violent veer to one side to keep from colliding with our craft. As she passed by, not forty feet away, the officers hurled upon our heads every unprintable name in their broad vocabulary – but it was all Greek to us.

By half past two I looked back toward Europe to find, to my alarm, that I was already abeam the Sestos bluffs. It made me realize how relentlessly I was being swept downstream. And Xerxes’ Thron, the conspicuous last-chance goal above Abydos, where the Persian king sat to watch his army cross the Hellespont on a bridge of boats over the very channel I was swimming, seemed to have moved laterally miles up the coast, though not toward me.

Before three o’clock I was in mid-stream. The wind had constantly increased, and was now churning the water with white caps. Every few minutes I was half drowned when the resentful waves broke unexpectedly over my head. It seemed to me I swallowed half the Black Sea. Nausea seized me so painfully that several times I was ready to give up. But the increasing cold was the worst thing of all. The water flows so rapidly, even the surface has no opportunity to be warmed by the sun. After the first hour I began to grow uncomfortably numb.

However, the Throne of Xerxes was not far off now. All along, this had been a guide-point. And yet, as I drew near to it, I realized the ricocheting current was sweeping me parallel to the shore about ten times as fast as I was approaching it. The trees and rocks began to gallop past. From mid-stream I had calculated that I would land half a mile above the tip of Abydos point, but the mile soon became a quarter, a sixth, a tenth. After two hours in the water, within three hundred feet of shore I was being swept past the ‘last chance’ of solid ground, just as, and where, Leander had been swept twenty-five hundred years before . . . and should I fail to reach the beach by ever so little, the current would drag me across the Hellespont, back to the European shore whence I had started.

Never have I felt such utter despair: a five mile swim – my Hellespont – to miss achievement by one hundred yards! Never have I struggled so desperately. My eyes became blurred, seeing only the land not far from me. I ceased to know where I was, or what I was doing, here in this cold, tormenting, boundless ocean. Mechanically I thrashed the water with my weary arms and legs.

Then – bump! – my knees struck bottom. I was swimming hysterically in less than three feet of water, for the shore sloped so gradually that, even at three hundred feet out, the water was not waist deep. With not one second to lose, I stood upright, and staggered ashore, with Rod, who had jumped into the surf, right beside me, and flopped on the last foot of ground at the point.

And so the Hellespont, that treacherous and briny river, was swum once more. Though I am but one of several to have battled successfully with its evil current, I have a distinction no one else can claim. Leander swam to look into a lady’s eyes; Lord Byron, that he might write a another poem; but I can boast of being the only person, dead or alive, who ever swam the Hellespont on a can of sardines. ■ 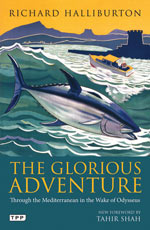 Richard Halliburton (1900–1939) was America’s greatest  adventurer and one of the most successful travel writers of the twentieth century. Halliburton has not been seen since 1939 when he disappeared while attempting to sail across the Pacific in a junk. His books include The Glorious Adventure, The Flying Carpet and Seven League Boots.