Flowers aborted in the bulb: a feeling we’ve all experienced from time-to-time, especially after an ill-considered walk up the stairwell at Tufnell Park tube station late on a Thursday evening. It is these nagging pangs of unfulfilled potential – sporting or otherwise – that Percy Shakespeare takes up in this ironic self-portrait, suggesting desire over actual achievement in an eccentric, and relatable, assertion of his own masculinity. Whether it’s sucking your chest in, flexing a bicep, or delivering a pep talk that could rally the most ramshackle of Sunday league footballers to cup glory – we’ve all had our moments in front of the mirror.

Tragically, Shakespeare was killed in 1943 at the age of 37 when a German bomber jettisoned its payload over the East Sussex coast, where he was walking alone. However, despite a life cut short, Shakespeare still managed to capture, as Edith Wharton might say, the unattainable and improbable ‘flower of life’. TA 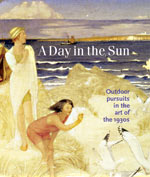 This painting can be found in our book A Day in the Sun: Outdoor Pursuits in Art in the 1930s, along with more examples of Shakespeare’s figure paintings that straddle the fine stylistic line between avant-garde abstractions and Edwardian tradition.

Click to view a larger image of the painting.

One thought on “Painting of the Week: 64”