The naked body remains a site of contestation, but what does it mean to be naked in public? Ukrainian feminist protest group FEMEN are making the question evermore complex. 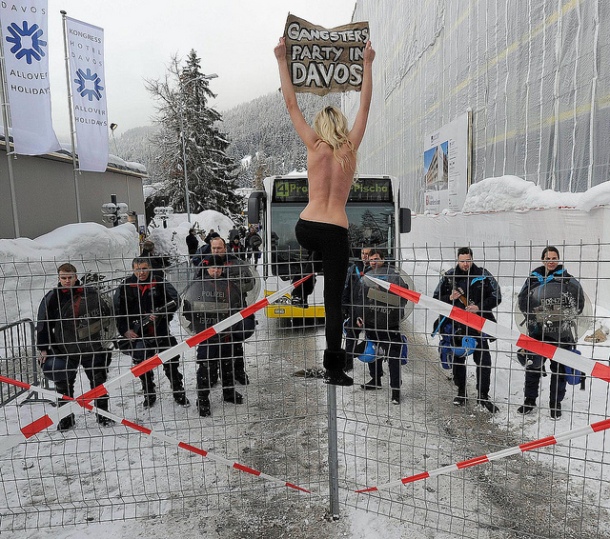 Nakedness is everywhere. Deployed in advertising through the increased sexualisation of Western culture, the significance of the unclothed or dangerously exhibitionist body has been signified throughout the ages: the Sheela-Na-Gigs, stone carvings of old women with exposed genitalia on Romanesque churches; the legend of Lady Godiva who used her body as protest through the streets of Coventry; or the debate surrounding the representation of Christ Himself. Early church scholars and heretics hotly contested whether Christ, as a spiritual entity, could possess a physical body (docetism), resulting in intense speculation as to whether the artistic image of Christ’s person on the cross was, in fact, legitimate. In the ancient world, there was a preference for smaller genitalia on their male statues, as the large phallus was considered to be a sign of the uncivilized Other. In The Clouds, Aristophanes maintained that ideal masculinity should encompass ‘muscles that are thick and a pretty little prick’, whilst black femininity, exploited in the post-mortem exhibition of the Hottentot Venus (Saartjie Baartman) in the nineteenth-century, revealed an enlarged and elongated labia to the eagerly probing public, thus showing a continuity with this ancient view of the Other.

In more recent culture, the naked body remains a site of contestation: speculating on a confrontation between his cat and his undressed body, Derrida famously identified ‘the impropriety [malséance] of finding oneself naked, one’s sex exposed’ (The Animal That Therefore I Am). Our culture maintains an uneasy position between the shame of the nude and the exploitation/celebration of it. In terms of gender, is the performance of burlesque, the craze for pole-dancing as ‘fitness’ or stripping for one’s lover a gesture of emancipation or patriarchal indoctrination? Can the performance of pornography ever be politically radical? Similarly, how do feminists, theorists and cultural commentators respond to the phenomenon of FEMEN (FEmale ENergy), a feminist protest group, which emerged out of Kiev, Ukraine in 2008?

It is a very complex question. The motivations of FEMEN are unquestionably noble: they are activists who campaign for sexual and social equality by the scandalous display of their breasts. FEMEN maintains their members are Amazons and warriors, ‘morally and physically fit soldiers’, who each bear a wreath of flowers on their heads: an Ukrainian symbol of innocence. They simultaneously represent an ideological purity whilst courting a certain frisson with scandal, through the exposure of the female form. Its aims? The organisation asserts its chief targets are as follows:

[S]erving to protect women’s rights, democracy watchdogs attacking patriarchy, in all its forms: the dictatorship, the church, the sex industry.

Having protested in multi-coloured clothing, as well as just underwear, the activists decided it was time to alter their campaign: ‘journalists weren’t interested… We realised we had to do something more radical’ said one of FEMEN’s founding members, Aleksandra Shevchenko. Bearing their breasts and writing on their bodies with slogans protesting against Islamic fundamentalist treatment of women and sharia law, they stage high profile protests outside Mosques; they position themselves against sex trafficking so problematic in the Ukraine as elsewhere and have interrupted a stage show at the International Porn Forum in Paris. They have members across the globe and have found themselves vilified and even arrested in Belarus, Russia and the Ukraine itself. FEMEN is currently based in Paris, as another member, Inna Shevchenko, left Eastern Europe for France, following a protest in which she felled a cross in support of Pussy Riot, the Russian punk-feminist band. As Aleksandra Shevchenko has stated: ‘When you are naked, you are free; to protest topless is to protest without violence, but people can be shocked – they can have very strong reactions.’ Indeed, various social media forums such as Facebook include images which photoshop the protests, removing or obscuring the nipples and genitalia of the protestors – such is the threat to ‘decency’ in the naked human body.

Of course, none of this is particularly new. Germaine Greer famously posed naked for Suck magazine in the 1970s. In each instance, we might ask how far this well-motivated protest can achieve anything? Certainly the world is giving FEMEN attention, but with what motive? Greer herself has remarked that ‘FEMEN offers a very marketable version of contemporary femaleness.’ The women protestors as featured in the news columns across the world are young, slim, and attractive. Breasts are the chief weapon of choice: more rarely does the revelation of vagina actually feature. One notable exception is the FEMEN Egyptian leader, Aliaa Magda Elmahdy, who has stripped entirely naked (with the exception of black lace stockings), and posed for a full frontal photograph which then appears on various social media sites. At risk from Islamic extremists, her actions paradoxically support the idea that the West is decadent and corrupt. Why else would a young Egyptian woman strip off in such a ‘shameful’ fashion?

Whilst we can see how such gestures can seem to pose a ‘threat’ to patriarchal politics, middle eastern perceptions of women and gender inequalities, they also, tragically, can be seen to play right into the hands of mainstream media which valorizes the neat torso, the managed and pristine female nude. Similarly, the 150,000 plus members of FEMEN are almost exclusively online. How many would emerge in sisterly solidarity at a protest hundreds of miles from home?

Alas, the female form is easily co-opted to serve other purposes than those feminist ideals advocated by FEMEN. The effect of such radical public dissent can be alarmingly diluted when subjected to the gaze of journalists, politicians and indeed the general public. Our bodies are easily turned into commodity and easily accessible masturbatory aids. Everywhere women are encouraged to alter their bodies to comply with a socially acceptable vision of femininity, or to pander to male-orientated perceptions of what a ‘woman’ should be. If FEMEN can shift such ideology, it deserves much recognition and praise. As it is, the group may be hopelessly conforming to the very idea of womanhood it denounces. ■ 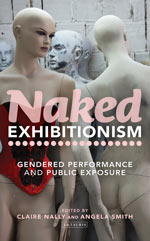 Claire Nally is Senior Lecturer in Twentieth-Century English Literature at Northumbria University and Angela Smith is Reader in Language and Culture at the University of Sunderland. Their new edited collection, Naked Exhibitionism: Gendered Performance and Public Exposure, is out now.

Top image via cantankerousbuddha shows a FEMEN activist protesting at the 43rd annual meeting of the World Economic Forum in Davos, Switzerland.