It’s time we started thinking differently about the Weimar Republic. 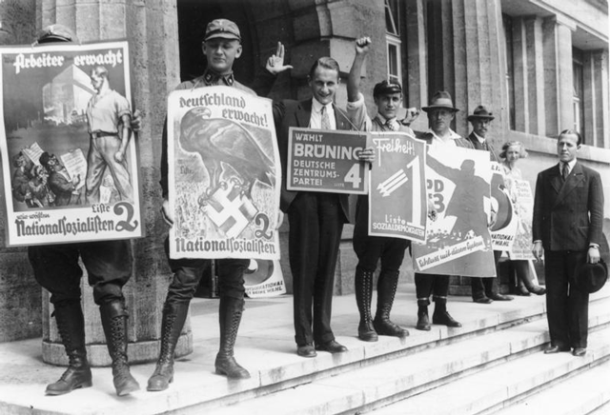 In the eighty years since its dismantlement by Adolf Hitler, the Weimar Republic has had a pretty bad press. For generations of historians the first German republic has been a weak and inherently flawed experiment, unloved by its people and doomed almost from the beginning by the circumstances of its birth. Created during a period of revolution in which the German monarchies were swept away by popular discontent in the aftermath of defeat in the First World War, it was a bold and ill-fated attempt to blend German political culture and traditions with ideals of mid-Atlantic parliamentary democracy. But it was rocked almost from the outset by successive political and economic crises, suffered from civil war, domestic terrorism and violence on the streets, and was riven by bitter political and social divisions. At the same time, the humiliation of defeat and the harsh peace terms imposed by the victorious Allies left a legacy of bitterness that enabled right-wing politicians to blame Germany’s ills on foreign powers. For many the very mention of the Republic conjures up images of wheelbarrows heaped with worthless paper marks and fighting in the streets. Such images have become ingrained in the popular and scholarly imagination, to the extent that Weimar Germany has become a by-word for political instability and economic crisis and a benchmark against which Europe’s current economic and political troubles have been measured. The abiding impression is of a society driven by fear and resentment into the arms of an unscrupulous demagogue who offered radical solutions to their problems but would ultimately lead them to their doom.

Yet there is also another side of Weimar Germany that has become fixed in the popular imagination, particularly in the English speaking world. Thanks in part to the pioneering work of Peter Gay and Walter Laqueur, but more as a consequence of the popularity of Bob Fosse’s 1972 film version of the musical Cabaret, the Weimar era has become famous – even notorious – for its vibrant cultural life.   For many in Britain and America Weimar Germany means wild and hedonistic nightlife, avant-garde art and saucy cabaret. It means Liza Minnelli’s Sally Bowles, the paintings of Otto Dix and the music of Kurt Weill. The enduring appeal of this image can be seen in that even as contemporary journalists have held up the Republic as ‘a warning from history’ there have been successful TV adaptations of Christopher Isherwood’s account of his time in Weimar Berlin, Christopher and His Kind (2011), revivals of the stage version of Cabaret in London (2012) and Berlin (2013), a radio documentary on Weimar cabaret (2011) presented by the Australian comedian Barry Humphries and a festival on London’s South Bank in March 2013 dedicated to the musical legacy of the Weimar period. Yet even this perception of Weimar as a free and easy republic of art and experimentation is not without its darker side. There is a sense that all of this ‘divine decadence’ merely masked the hollow and rotten heart of the republic and was as much a symptom of Weimar’s instability and emptiness as worthless paper money or political violence. Even the most sympathetic accounts of Weimar’s culture and nightlife cannot help but give the feeling that those participating in it were ‘dancing on the edge of a volcano’. And there is a fatalism in such accounts perhaps best summed up by Peter Cook’s assertion that when he opened the Establishment Club in 1961 he modelled it on ‘those wonderful Berlin cabarets which did so much to stop the rise of Hitler and prevent the outbreak of the second world war’.

However, as recent research by historians in Germany, Britain and USA has shown, such pessimistic impressions of Weimar are deeply misleading. The republic was far from being just the doomed democratic experiment or the hedonistic capital of avant-garde culture that it has been stereotyped as for much of the past century. And far from being a failure that left nothing behind it save a few films, songs, plays and paintings, it had very real and lasting achievements. While it is true that Germany experienced revolution, civil war and political violence during the 15 year life-span of the Weimar Republic, it also witnessed an upsurge in constructive political participation and a degree of consensus that has often been overlooked. Long-desired social and political reforms became reality and Weimar Germany led the world in social legislation, cultural experimentation and sexual tolerance, blazing a trail that many societies would later follow. It brought an unprecedented degree of emancipation for women and pioneered models of social intervention that would be widely imitated after the Second World War. At the same time, the abolition of censorship and the very uncertainties and crises of the 1920s created an atmosphere of social and cultural experimentation that led to an extraordinary explosion of new ideas and avant-garde art and literature. The republic nurtured a generation of scientists and thinkers who laid the foundations of theoretical physics and profoundly changed the way people thought about themselves and the world around them.

Considering what came after it the fact that Weimar democracy ultimately failed to survive was a tragedy not just for Germany but also for the whole world. Yet this should not detract from its numerous achievements. There was more to this period than political and economic crisis or a fertile but ultimately doomed avant-garde culture and we should not lose sight of the positive features that emerged from it. The story of the republic is complex and multi-faceted; one of creation as well as destruction, and it deserves to be remembered as such. It was a remarkable period in German history that demonstrates both the best and worst features of democratic politics and what can happen to modern industrial societies when they face extreme conditions. And in that sense at least it is clear that there is much we can learn about our own times through study of Weimar Germany. ■

Colin Storer is Lecturer in History at the University of Nottingham and is the author A Short History of the Weimar Republic, the latest in our Short Histories series.

Visit short-histories.com for more information about the series.

One thought on “Weimar Germany, More Than a Cabaret”