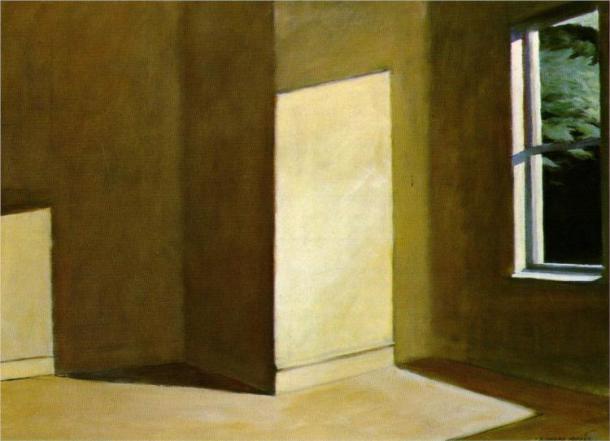 Within the history of painting, there are instances wherein the knells of mortality can be seen to be encroaching on the artist’s psyche and in turn, within the work that they make. Think of Rembrandt’s increasingly maudlin and introspective self-portraits, or the change of Titian’s palette, if not his brushwork wherein the gravitation towards a more sombre set of hues was inversely proportional to a more fluid painterly style, the latter being suggestive not of freedom, but perhaps of abandonment. Sun in an Empty Room, painted by Edward Hopper in 1963, four years before the artist’s death when he was 84 years old shows no such discernible pangs. Instead, the artist appears to have purged the painting of anything that might be construed as autobiographical.

The painting itself consists of what are in effect three asymmetrical, vertically aligned rectangles that are loosely organized around a diagonal that works its way up towards the upper right hand corner of the composition. Working from left to right, the first two of these are shafts of light that fall on the room’s walls. The final of the three is the window itself, somewhat elevated above the other two and pushed towards the far right of the composition. Beyond that, there is very little else. Admittedly the window crops a section of what appears to be a tree or some other foliage, but such information seems incidental, and, indeed anecdotal to what is perhaps the meaning of the painting.

Although there is a certain lack of extraneous detail, and although I have already claimed that this painting is not autobiographical, in one sense, I would be wrong. As a number of commentators writing on this painting have observed, when asked about the painting’s ostensible meaning, and as if by way of quelling the possibility that any reading would invariably speak of it in terms of how ‘enigmatic’ it was, Hopper, ever the pragmatist, claimed that he was ‘after me.’ But what is this ‘me,’ this ‘I’ of which the painting speaks? Well, I don’t think this painting speaks of the self in a way that our aforementioned examples of Rembrandt and Titian do. However, if there aren’t necessarily discernable intimations of mortality, of which I don’t think there are as such, there is nevertheless a psychology at work within the painting and indeed a presence whose silence, if not necessarily deafening, is clearly audible. CS

View a larger image of the painting here. 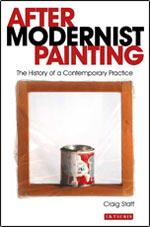