Ritual hazings, sauna parties and missed appointments – how much of an advantage is it to be an art historian researching contemporary artists? 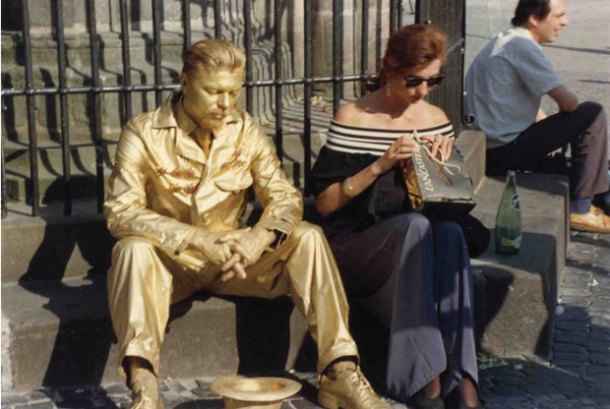 At some point or other, just about every art historian has wished they could simply ask the artist they are researching why they did what they did, or how, or what it meant to them at the time. Art historians researching contemporary artists actually have the benefit of being able to do that. But how much of an advantage is it really?

The trouble with living artists is that they are human, just like the rest of us. They are busy, they forget things, they miss appointments, and, what’s more, they don’t have all the answers. That’s not to say that working with living artists can’t be great, but it does come with its own specific challenges.

Imagine going through the trouble of getting a visa to visit a country, purchase a flight there, make the trip, and arrive on your artist’s doorstep only to find that he is in another country. This has happened to me not one, but three times. On the positive side, on each occasion this ‘ritual hazing’ has indebted the artist to me, meaning that the next time I came to visit I was overwhelmed with books, DVDs, computer files, and unlimited access to the artist’s time. Maybe it was deliberate. Maybe they were testing me to see how interested I really was in their art. At any rate, I passed, and I have never been stood up by any of those artists again.

Another rite of passage was the weekend I spent at the home of Miervaldis Polis, a Latvian artist who lives in the remote countryside, miles from the nearest shop or house. I spent 48 hours with him and his partner there, with complete and unlimited access to the subject of my research. Needless to say, we talked a lot, and not always about his artwork. At one point I was invited to participate in a local tradition – a sauna party. I had never been in a sauna before, and to have my first experience when I was technically supposed to be working, with an artist that I knew professionally, not personally, was somewhat daunting. But nevertheless I survived.

Working with living artists also brings with it a bit of cache, especially when the artist is recognised in public. Following one interview, St. Petersburg artist Sergei Bugaev Afrika put me in a taxi to get to the train station for my journey home. Afrika is not only well-known as a visual artist in Russia, but is adored throughout the former Soviet Union for his starring role in the 1987 cult-classic film ASSA, where he played the lead, as Bananan. The taxi driver recognised him, and proceeded to bombard me with questions for the duration of the taxi ride. Was that Bananan?! How do you know him? What is he like? What is his studio like? How do you know him? Where does he go on holiday? He even asked me to explain who this ‘Bananan’ was to his girlfriend, who happened to be along for the ride in the passenger’s seat, and was unaware of the celebrity in her midst. Then, upon finding out that I was American, he asked me if I had an American flag with me, which he could keep as a souvenir. As I happened to be all out of flags that day, I gave him my business card.

There are some artists that are so famous that they just don’t have time for you. Once I met an artist at a club that he owned, a popular hangout for the alternative crowd and youth of the area. I was kept waiting for an audience with him for about 45-minutes after I arrived, and then our interview kept getting interrupted as other, much cooler people than me needed to speak with him. At one point he asked if what we were doing was supposed to be an interview, to which I wanted to respond that I wasn’t so sure anymore. But things like that you just have to take in stride.

Other artists will cook you dinner and offer you a place to stay in their flat, which was the case with Polish artist Katarzyna Kozyra, when I went to interview her in Berlin. When she found out I was staying in a hotel she said that she would have let me stay at her place, if she had thought of it. She was leaving town the next day and said that I could have had the place all to myself.

Finally, perhaps the greatest trouble with living artists is the fact that they are mortal, which means that sometimes it happens that we outlive them. This is the case with an artist that I have been doing research on for some time, but never managed to interview either in person or electronically, through Skype or email. Vladislav Mamyshev-Monroe was a Russian artist who spent a great portion of his artistic career in disguise as Marilyn Monroe, among other celebrities and historical figures, both male and female. He died as tragically as his namesake, young (at the age of 43), and dramatically (by drowning). Although we had many tentative plans to meet and discuss his work, I never imagined that there was any urgency to do so. My last point of contact with him was a birthday greeting that he sent to me, with a promise to meet someday soon, on Skype. Now, just as for other art historians who do not have access to the artists that they write about, my questions for Mamyshev will remain unanswered.

Working with living artists can be as rewarding an experience as it can be demanding. It is tempting to take the artist’s word as the be-all-end-all fact of what his or her art means or should mean, but ultimately, it is simply another perspective. Artists are human beings just like the rest of us, and sometimes they remember things differently, and other times they forget. While quirky and unpredictable, I certainly find working with them more interesting than thumbing through dusty and yellowing hardcovers from the library shelves. Working with living artists has its challenges, but in the end, it is the human dimension that adds a unique and inimitable layer to one’s research. ■

Amy Bryzgel is the author of Performing the East: Performance Art in Russia, Latvia and Poland Since 1980, and is Lecturer of History of Art in the School of Divinity, History and Philosophy at the University of Aberdeen.