100 years after Emily Wilding Davison lost her life at the Epsom Derby, the Suffragettes’ legacy lives on as modern day feminists continue to use the female body to confront depoliticisation. 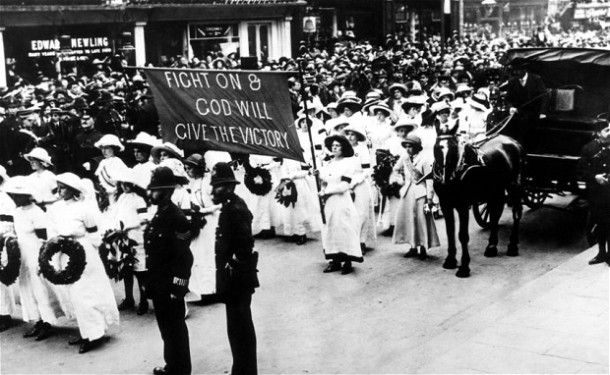 June 2013 marks the centenary of the death of British suffragette Emily Wilding Davison, who died as a result of injuries sustained after being trampled by a horse at the Epsom Derby in that month.  Like early 20th century feminists, women around the world in the 21st century continue to band together to campaign for equality, particularly in Pakistan and Saudi Arabia, where there are campaigns to gain equal suffrage.  In India and around Africa, the campaigns are for equal rights, particularly in response to sexual violence against women.  In Europe, the campaigns relate to perceptions of de-democratisation, as raised by Pussy Riot members and FEMEN, and as a response to sexualisation violence, highlighted by the SlutWalk campaigns which started in the United States.  These women are continuing a form of public protest that reached its zenith in Britain in the early years of the 20th century, as women campaigned for equal franchise with men.

Emily Wilding Davison’s actions made her one of the most famous suffragettes of her time.   A century of speculation about her death has focused on her possessions at that time.  In particular, the return railway ticket in her purse has led many historians to suggest she had no intention of committing suicide that day.  However, Elizabeth Crawford’s latest research strongly suggests that ‘special offer’ return tickets were the only ones available on Derby Day, and so this piece of evidence can be discounted.  However, other recent research into her death has largely favoured the view that she did not commit suicide on that day, but was instead aware of the possible consequences of her actions and was ready to face them: this being arrest, injury or death.   Like FEMEN protesters a century later, she was using her body as a means of protest.

Whatever her motivation, Davison’s death remains one of the most iconic moments of the militant suffragette movement, caught on camera, in the years immediately before the First World War.  Thousands of women, and some men, took part in the women’s suffrage campaign in these years, with hundreds of them being arrested as their demonstrations became more imaginative. The 1911 census boycott, for example, saw many thousands of women physically absenting themselves from being  ‘at home’ on census night by taking part in all-night roller-skating, midnight picnicking in parks, and camping out in caravans. Davison herself hid in a broom cupboard in the House of Commons, thus enabling her to put this exclusive address down as her place of residence.  After the failure of successive governments to pursue the women’s suffrage agenda, the campaign became more militant.  Mostly, the actions were aimed at property, such as setting fire to post boxes (a crime for which Davison was imprisoned), breaking windows and burning bastions of patriarchy such as cricket pavilions.

The State dealt with these actions, not by engaging in dialogue, but by throwing the women into prison.  The more militant suffragettes appealed to be made First Division prisoners, the category afforded to political prisoners rather than common criminals.  When this was denied, they started hunger strikes.  Marion Wallace Dunlop was the first to refuse food in July 1909, resulting in her early release from prison.  However, this physical protest was soon taken up by other suffragette prisoners as they campaigned for recognition as political prisoners. The State’s response to this was the horror of force feeding, a method of control and domination that had long term health consequences for many of these women, including early deaths.  Here, the act of hunger striking was here being used as a protest against the categorisation of their incarceration.  Move forward a century and we find another group of women in prison for political reason, also engaging in hunger strike: the Pussy Riot members.

The provocatively-named Russian feminist punk band Pussy Riot had been gaining attention and support across Russia for their anti-Kremlin stance, as expressed in their song lyrics.  They attracted international attention when three members of the band – Maria Alyokhina, Nadeshda Tolokonnikova and Yekaterina Samutsvich – performed one of these songs in Moscow’s Christ the Saviour cathedral in 2012 and were subsequently arrested.  However, the charges brought against them were not for political dissent but ‘hooliganism motived by religious hatred’.  Tolokonnikova and Alyokhina were both sent to prison colonies, whilst Samutsvich’s sentence was suspended.  Their 40-second protest for which they were convicted was against Vladimir Putin and his government’s close ties with the powerful Russian Orthodox Church.  By convicting the women on the grounds of religious hatred, the band members were framed as religious dissenters rather than political dissenters.  This reframing of their argument is very similar to that levied at the early 20th century suffragettes, whose political motivations were reframed as civil disobedience by the State. Alyokhina went on hunger strike in May 2013 (ending after 11 days), having been refused permission to attend her own parole hearing as part of her appeal to have her prison sentence deferred so she could look after her two year-old son.  Like the suffragettes a century before, she resorted to protesting using the only means left to her: control over her own body.

The case of the Pussy Riot members’ imprisonment attracted high profile support, with Madonna proclaiming her backing for them when on stage during a concert in Moscow, and Paul McCartney and Yoko Ono both drawing on their own celebrity political capital to write open letters to Putin appealing for leniency and to release the women early.

The Pussy Riot members are perhaps the most well-known of the current feminist protesters in Russia, but the FEMEN movement is also prevalent there.  Where the suffragettes of the early 20th century were exponents of conservative femininity in their dress (something Emmeline Pankhurst advocated), the FEMEN protesters flaunt their femininity by removing their tops, including in a protest directed at Putin that led to an iconic image as he was snapped looking on in leering surprise when confronted by a bare-chested FEMEN protester, Alexandra Shevchenko, at a Hanover trade fair in April 2013.

In the hundred years since Emily Wilding Davison’s death, it seems women continue to collectively raise their political voices, and yet the response by the State, such as we see in Russia, is to attempt to depoliticise them.  The women’s bodily response to such depoliticisation can be said to provide a direct link with the earlier suffragettes. ■

Claire Nally is Senior Lecturer in Twentieth-Century English Literature at Northumbria University and Angela Smith is Reader in Language and Culture at the University of Sunderland. Their new edited collection, Naked Exhibitionism: Gendered Performance and Public Exposure, is out now.