Touching and Imagining, Jan Švankmajer’s remarkable book on tactile art, is now available for the first time in English.

Written in 1983 when Švankmajer stopped directing films after censorship by the Czechoslovakian government, Touching and Imaging: An Introduction to Tactile Art, illustrated with over 100 images, chronicles his intensive experimentation with tactile phenomena and art’s ability to liberate.

Regarded as one of the world’s foremost avant garde filmmakers, Jan Švankmajer is renowned for his unique vision and limitless imagination. From his first films in 1963 to feature-lengths like Alice and Faust, his surreal, playful and deliciously dark mixes of live action have influenced artists and filmmakers across the globe.

Below read  Švankmajer’s brand new introduction to the book.

My tactile experimentation began somewhat out of spite. My first tactile object took form shortly after I had to abandon working on the film The Castle of Otranto (1973-9). I actually refused to do a re-shoot to conform to the orders of the management of Krátký Film. Since it was not my first confrontation with censorship after the Soviet occupation when the ideology became very restrictive, I concluded that effectively I could not make my own films. That situation lasted for seven long years during which I occupied myself with an intensive study of touch in relation to imagination. I turned to a field of creativity that could be regarded as almost an extreme contradiction to the audiovisual film. Without that prohibition, the experimentation described in this book would probably have never happened; so much for the idea that totalitarian systems and censorship act as a brake on original creativity. In a sense they act in exactly the opposite way. To overcome difficulties and to get around prohibitions whips up defiance and subversion, which is inherent in all creativity worth that name; it achieves fine nuances.

At that time the Surrealist Group, which Eva (my wife) and I were members of since 1970, was preoccupied with a theme: Interpretation as Creative Activity. The Group was again languishing in the underground without any chance to publicize itself or to exhibit, and was relegated to isolation and samizdat. We initiated a number of interpretative games on that theme. We wanted to demonstrate the priority of the creative process above the final artefact. We believed that in times when, on the one hand, creativity was commercialized and, on the other, it slavishly followed ideology, there was need for some alternative. As radical an alternative as possible. Not just a reaction but an ‘absolute departure’. What we visualized was an interpretative delirium, a trance, a chain reaction in which the ‘artistic artefact’ would dissolve and lose its value. It would become a mere excrement of the creative process. The creative process would gain in basic importance because its realization, its foundation would be that which carries with it the sense of creation, the therapeutic influence that undermines, that assists survival in this prostituted world. Something that is not possible to misuse ideologically or to turn into cash.

Into this group endeavour I brought the game of ‘Restorer’. A banal picture of a restorer at work was the start of an interpretative process and the resulting object comprising waste fragments of reality, furthermore covered by black cloth, could hardly bless itself with the name of ‘artistic artefact’. The meaning was found by uncovering the creative process, unlocking the symbols and analogical connections, in tactile memories from childhood, all of which the group found liberating. Firstly our touch, dulled by manual work, had to be dragged away from utilitarianism and returned to imaginative childhood experiences, to the discoveries of the original world. It is important to bear in mind that if, in today’s world, ‘art’ has any purpose, it is to liberate us. Liberate us from the principle of reality, from that pragmatic rope which regimented us from birth and return us to the principle of pleasure. Repression is not only a product of totalitarian regimes, it is in the foundations of all civilisations (as we know from Sigmund Freud). It starts in earliest childhood: Don’t touch it, phoo, you’ll get dirty, don’t lick your fingers, it’ll make you sick, go and wash yourself, what have you been sticking your fingers into, don’t stick your fingers in your nose, don’t walk in the mud, let go of it now… ■ 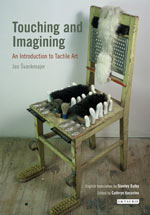 Czech Surrealist, Jan Svankmajer, is best known for his extraordinary animated films, Alice, Faust, Little Otik among them. His work far exceeds the limits of film and, whether film, visual or literary, is connected with the collective activities of the Group of Czech & Slovak Surrealists. Touching and Imagining: An Introduction to Tactile Art is out at the end of the month.

Join 6,544 other subscribers
My Tweets