Whether commemoration will reinforce or debunk public myths remains to be seen, but the words of those who fought, in all services, must take centre-stage.

Was the First World War worth fighting? Over the next four years this question will dominate much of the cultural and academic output of the UK as the hundredth anniversary of the conflict is commemorated. What message these activities intend to convey is unclear. Will they reinforce the poet’s view of slaughter and disillusion, or provide a more nuanced picture of the experience?

Historians too are unable to agree. Michael Wood recently suggested that ‘every town and village, every street, lost its boys – and for a bad cause.’[1] Max Hastings, meanwhile, expressed the less fashionable view that ‘though the war was indeed a vast tragedy, there was a cause at stake that had to be defended – that Britain could not credibly have remained neutral.’[2] Niall Ferguson is somewhere between the two –‘we should not think of this as some great victory or dreadful crime, but more as the biggest error in modern history.’[3] Looking again at the testimony of servicemen can shed considerable light on this issue.

The war was a complex experience and, despite the terrible consequences, men’s continued will to fight has fascinated historians. In the summer of 1916, Francis Saxon Snell, a Second Lieutenant in the Royal Berkshires told his wife: ‘I have to deal with men whose response to noble impulses has been strong enough to make them give up their homes and everything they value from motives that must be wholly unselfish… in spite of all, they are full of courage and cheerfulness.’[4] Forty-three per cent of the British army were volunteers and for a variety of reasons, many of these 2.5 million men continued to believe they had made the right choice.[5]  In his 1938 memoir, soldier R. A. Lloyd enthused that ‘during the best years of my life I had given to it the best that was in me and received precious little in return. I would gladly go through it all again for the sake of the good time spent in the company of the greatest fellows of all ranks who were my comrades.’[6]

And it’s not just in the army where such views were expressed; other servicemen also valued their role. In a letter from Christmas 1916, pilot H. G. Downing advised his family to ‘buck up for the next one, as when our Squadron gets busy the poor Huns will simply give up the ghost & we shall all be home.’ Ten months later he assured them that ‘everybody seems very optimistic out here & I don’t think it will be many years more.’[7] He talks of years rather than months, implying a common desire to fight for as long as necessary. William Bishop also enjoyed his time at war: ‘[The] excitement of the chase had a tight hold on my heartstrings and I felt the only thing I wanted was to stay right at it and fight and fight and fight in the air. I don’t think I was ever happier in my life.’[8] So too the Royal Navy, enduring a war with little enemy engagement, remained largely optimistic as Douglas King Harman insisted: ‘I wouldn’t be anywhere else except here for anything.’[9]

It is the sheer scale of death that has led to questions about the war’s worthiness, but contemporary responses are also remarkably accepting. In September 1915 W.A Rogers, recently arrived on the Western Front, experienced his ‘first real baptism of shell-fire, but not one man flinched from his duty and had the word charge been merely whispered I think every man would have done so without a second thought.’[10] At Jutland in 1916, sailor Paul Nesham told his mother although he had ‘lost heaps of pals’, he was sure that this was ‘the way they all wanted to die!’[11] Pilot Arthur Gould Lee went further in affirming ‘that the daily risk of violent end was accepted unconcernedly.’[12] Servicemen dealt with death by taking each day at a time, motivated by a variety of factors including strong and defining loyalties to their fellows. Using contemporary sources we see that combatants were not universally disillusioned but instead maintained their motivation and belief in victory. ‘Whilst so many things were shaken’, C. E. Montague declared, ‘one thing that held fast was the men’s will to win. It may have changed from the lyric-hearted enthusiasm. But it was a dour inveterate will.’[13]

The consequences of the war were far reaching, retaining an emotional hold in Britain today. One outcome is that every individual life lost in service is now widely acknowledged. Although decisions to go to war no longer command national enthusiasm, we respect the choices of those joining the armed services in order to defend British interest abroad. By extension, then, we should try to understand those who made that same decision at a time when war was seen as the honourable and necessary option, for whom participation was a source of pride and achievement. ‘Of course I hate the trenches as much as any other normal, healthy person, and have no desire to return before necessary’, soldier Stephen Hewitt wrote ‘but that is the only cloud… over one of the most delicious experiences of a lifetime.’[14]

The next four years are a chance to look again at the public presentation of the First World War and to reconsider the poet’s perspective of unremitting horror. By 2018, therefore, it is hoped that many of the long-established myths will lessen their hold, and that the experience of the Western Front will be shared with voices of those who served not just in, and from, other parts of the Empire, but on the home front and in other services – the airforce and the navy – all of whose contribution to victory was hugely valuable. Was the First World War a bad cause? A lot of men there didn’t think so – moments of unimaginable awfulness were balanced with comradeship, humour and a continued belief that endurance would be worth the victory. Many men were, as pilot Lieutenant Colonel Wilkinson explained, ‘excessively proud of being included in the squadron, and exceedingly anxious that it should not fail in its mission.[15] Whether the next four years reinforces or debunks public myths remains to be seen, but the words of those who fought, in all services, must take centre-stage. ■ 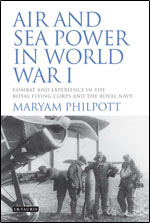 Maryam Philpott is the author of Air and Sea Power in World War I and currently works at the Innovation and Entrepreneurship Group, Imperial College London.