Translated for the first time into English, Jan Svankmajer’s Touching and Imagining is a playful, darkly humorous and pioneering work on tactility in art. Here, Cathryn Vasseleu reveals the book’s history, and why a translation is long overdue. 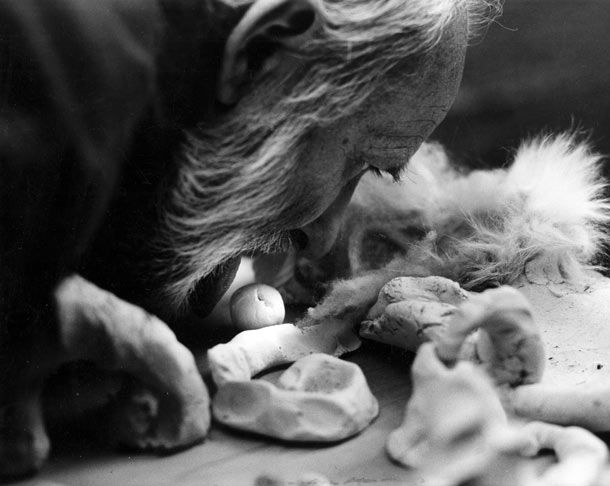 Jan Švankmajer is renowned as a Czech Surrealist filmmaker who weaves his material from the dark side of life. As well as using puppets and live actors, Švankmajer transforms the most banal objects and substances into living things in his films, making us believe he can animate anything. Švankmajer also extends filmic experience to include tactile sensation through the communicative powers of touch.
Throughout his career Švankmajer has worked in many other media beside cinema: as a scriptwriter, poet, artist, puppet-theatre master, and as a member of the Group of Czech-Slovak Surrealists. In the mid-1970s, Švankmajer began making objects for tactile experimentation with the members of this group. He continued his research from 1974–1983. For seven years during that period he temporarily abandoned film directing after censorship of his work by the then Communist government of Czechoslovakia (now Czech and Slovak Republics). Instead, he studied the nature of tactile phenomena and explored the relationship between imagination and our sense of touch. He wrote a book about his experiments, Hmat a Imaginace [Touch and Imagination], of which he produced five copies in 1983, all with‘tactile’ covers. Featuring rabbit fur along the spine and a hand shape cut out of sandpaper on the front, these copies circulated as samizdat, that is, works which were clandestinely produced and distributed to evade officially imposed censorship. Hmat a Imaginace has now been translated into English by Stanley Dalby, and is now as Touching and Imagining.

Švankmajer’s book is hard to classify. It is not set out systematically, and he says that to regard the text as a programmatic script for his work ‘would be slightly overdoing it’. The Surrealist artist aligns his work in general with poetry and alchemy – both arts of metamorphosis. Distilled from psychological experiments on his fellow Surrealists and from Švankmajer’s own childhood experiences, Touching and Imagining is a kind of alchemist’s philosophical treatise, not exact in its course but exactly directed nevertheless. Analogies aside, Švankmajer’s book forms part of his theoretical activity. Researching into the nature of tactile phenomena and the imagination, the results of his experiments bore out something remarkable: the existence of a ‘tactile imagination’ and ‘tactile memory’. Regardless of how it is categorised, his pioneering theoretical work makes a highly original contribution to ways of thinking about the psychical dimensions of touching. 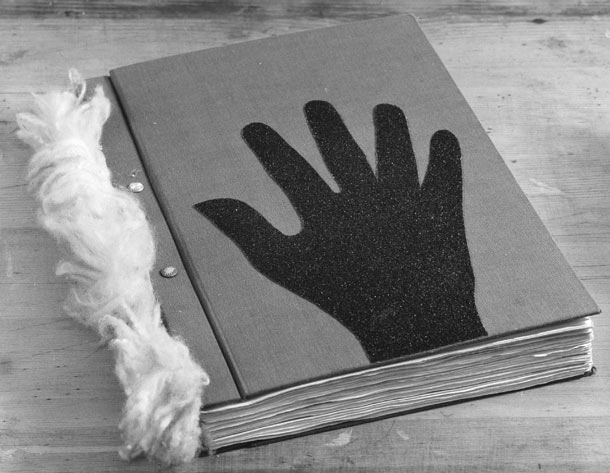 Few, if any, other artists’ theoretical works include playful, darkly humorous, occasionally erotic tactile objects, collages, games, poems and scenarios, as Švankmajer’s book does. These are included neither as illustrative examples nor as a gallery of art objects. Instead, they have an essential function as experiments with which Švankmajer sought to prove that tactile memory and a tactile imagination actually exist. Both, he argues, are prerequisites for the practice of tactile art. Švankmajer first demonstrated this in a game he devised called ‘Restorer’, the purpose of which was to study the extent to which touch is capable of stimulating associative thinking and becoming an imaginative stimulus, as opposed to having a merely identifying or utilitarian function.

In Švankmajer’s book, theory and experiment are supplemented by history and archive. Many avant-garde artists and filmmakers have experimented with ‘Tactilism’ (the title of F. T. Marinetti’s Futurist Manifesto of 1921). Max Ernst, Luis Bunuel, Salvador Dali, Marcel Duchamp, Meret Oppenheim and Edith Clifford Williams figure prominently among them. Švankmajer acknowledges their work, and that of many others, in a short anthology of tactile art, including a subchapter devoted to Surrealist exponents. His exemplary collection tracing the development of modernist tactile art also underlines that Czechoslovak Surrealism, developed from Karel Teige’s and Vitězslav Nezval’s Poetism, has roots that are different from but similar to French Surrealism.

The circumstances in which the English language edition of Hmat a Imaginace came about are less dramatic than those of its writing. That two Australians were involved is noteworthy, if only because the part-antipodean origin of Touching and Imagining is indicative of the cosmopolitanism of the themes it addresses. The story is a simple one. I cannot read Czech. Intrigued by the few fragments of Hmat a Imaginace that had been translated into English, I asked a translator friend, Stanley Dalby, if he would be interested in translating the whole book into English.3 With some hesitation he agreed, not being certain that he was up to the task of translating Jan Švankmajer’s complex prose. In January 2008, on a visit to Prague, Stanley obtained Švankmajer’s permission to publish the translation, in a meeting arranged by Michael Havas. What a Herculean task Stanley took on. Not only did it involve translating a book written partly in Slovak as well as Czech, and associated texts, into English, but also all correspondence between author and editor (and eventually, publisher) whose respective native language is a mystery to each other.

At the time Švankmajer wrote Hmat a Imaginace its Surrealist intentions were recognisable in connection with the history of artistic avant-gardes. Translated into English and republished almost thirty years later, Touching and Imagining will be judged by some readers through the prism of what Surrealism means today. I hope Švankmajer’s treatise on the interconnected communicative powers of touch and imagination will also inspire other forms of interpretation – some perhaps tactile.

Cathryn Vasseleu teaches animation at the University of Technology, Sydney. She is the author of Textures of Light: Vision and Touch in Irigaray, Levinas and Merleau-Ponty (1998) and writer/director of experimental animated films including De Anima (1991). The above article is an edited extract from the new preface to Touching and Imagining, which is out now.