Helen Chadwick’s notorious Carcass sculpture has been recreated for Tate Liverpool’s new Keywords exhibition. Stephen Walker explores the significance of the work, and how it resonates with the book that inspired the exhibition. 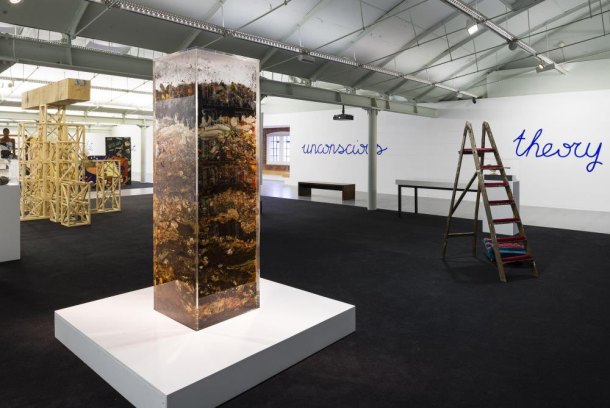 Amongst many artworks from the ‘long’ 1980s, the current show at Tate Liverpool, Keywords: Art, Culture and Society in 1980s Britain, includes a recreation of Helen Chadwick’s infamous Carcass (1986). The premise of the exhibition is to revisit Raymond Williams’ influential book Keywords: A Vocabulary of Culture and Society, reflecting on how the meanings of words alter with the cultural shifts in our society.  While the curation of the show benefits from not labouring the potential connections between particular words and works, it in turn provides an opportunity to explore more closely how Carcass relates to Raymond’s pioneering work.

Williams’ book itself comprises over 130 mini-essays, each of which tackles a particularly slippery word, ranging from AESTHETIC to WORK, via BEHAVIOUR, CAPITALISM, DIALECTIC, ECOLOGY, HISTORY, IDEOLOGY, LITERATURE, MEDIA, NATURE, POPULAR, RADICAL, SOCIETY, TASTE, VIOLENCE and so on. As this short sample suggests, Williams’ political leanings – socialist – are evident throughout his readings of Culture and Society. Each mini-essay is organised as a quasi-etymological exposition, cross-referenced to other entries, although each develops towards a more contingent, acerbic conclusion.

In Williams’ own words, the book ‘is not a series of footnotes to dictionary definitions… It is, rather, the record of an inquiry into a vocabulary: a shared body of words and meanings in our most general discussions, in English, of the practices and institutions which we group as culture and society.’ Although Williams himself updated the book for its second edition, and New Keywords: A Revised Vocabulary of Culture and Society, edited by Tony Bennett, Lawrence Grossberg and Meaghan Morris, was issued in 2005, the original vocabulary retains genuine currency in today’s ‘most general discussions’, and continues to reward revisiting.

Keywords was first published in 1976 and reissued in a slightly extended version in 1983. The dates resonate with particular moments of Chadwick’s career. In 1976, she was starting her MA at Chelsea Collage of Art and Design, producing works such as Domestic Sanitation and In the Kitchen, which had a flavour of the same pithy institutional critique found in most of Williams’ entries. By 1983, Chadwick was working on Ego Geometria Sum, the first of two ‘operatic’ works that define the mid section of her career. The second of these pieces is Of Mutability, designed for and first shown in the ICA in London. This large-scale work comprised several components, one of which was Carcass, a tall, clear class column filled with rotting vegetable matter.

Marina Warner referred to Carcass as a memento mori, balanced in the exhibition by a better-known Garden of Eden piece known as the reflecting pool or Oval Court. A small MYTH (in Williams’ first sense) now surrounds the fate of Carcass (perpetuated by reportage like Andy Beckett’s sensationalised account in the Guardian). Contrary to rumour, it didn’t ‘explode’. According to Philip Stanley, Chadwick’s partner at the time, who helped make the piece, ‘Carcass was made out of glass. Fishtank technology… We saved all the rubbish from the neighbours, the whole time, and then collected it all in the garden, and tipped it into there. Unfortunately, the silicone didn’t hold: it was OK, but it started to leak at one point, in the corner. I think it was the gas pressure that built up underneath, and the weight up above, it was pushing the stuff, so it was under pressure, more than the water pressure, and it started to come out. They tried to move it, but of course you can’t move a thing like that, and it just collapsed. And that was that.’

But that, it seems, was not that. As Marina Warner explains, ‘to [Chadwick] Of Mutability was a work in two parts, and it lost its point without its counterpart.’ Now, somewhat paradoxically, the Tate has reconstructed the counterpart and is showing this without its surviving other half.

Side-stepping this particular paradox, it is more productive to dwell on the resonances that Carcass can set up with Keywords. At first sight, with its powerful (or overpowering, in the ICA original installation at least… the smell – it was a hot summer – was by all accounts absolutely terrible) display of rotting stuff, it seems to defy the fastidious etymological probing and nimble political-philosophical argumentation of Williams’ work. Base matter meets high intellect. However, this combination is something that ran through Chadwick’s oeuvre, and she strove to maintain the connections between low and high, work and words. As projects such as her Self Portrait (1991), which shows her hands holding a human brain, or in The Philosopher’s Fear of Flesh (1989), this concern is legible in many of her realised pieces. Such projects make reference to her central interest in the body as that which exceeds philosophy, or tendencies towards universalising descriptions more generally. Equally for Chadwick, there was something in philosophy that remained resistant to the body, to difference, to aging, and so on. This productive tension was explored in extensive reading and research. Indeed, her preparatory work reveals her to have had a similar sensibility to Williams, enjoying a wide and varied range of reference and intellectual curiosity, while refusing to conform to intellectual fads and fashions.

Such is Chadwick’s breadth of interest, and the eloquent economy and enduring relevance of Williams’ mini-essays, that in combination their work could produce an exquisite corpse that just runs and runs. To pick up perhaps the most obvious way in, Raymond Williams’ entry on ART traces the increasing separation between artist and craftsman or artisan, the separation of ‘art’ from (mere) ‘skill’, ‘humanity’ from ‘usefulness’, intellect from manual labour. But Williams reminds us of the pre C18th situation when ‘most sciences were arts.’ Chadwick’s worldview was sympathetic to this, and in this matter (as many others) she was influenced by the writings of Arthur Koestler, who insisted on using the term ‘Philosophy of Nature’ rather than ‘science’ because the former carried so many more overtones. Her own art, and broader attitude, picked up on such issues intellectually, thematically and practically. She was vehemently opposed to the broad tendency to separate things out, to divide up what should be left as continua. She was, for most of her career, very hands on, deliberately acquiring new skills to complete her works. As Andrew Benjamin noted, ‘her work was to develop her métier… she focused on her métier, and theoretical work/writings can best be described as a complementary relationship with this central concern’.

Raymond Williams’ ART entry concludes with his usual sting-in-the-tail, observing how (paradoxically) most artworks ‘are effectively treated as commodities’ and thus, most artists are a kind of operative. While there are aspects of this observation that could be linked mischievously to the Tate’s re-creation of Carcass, it is more interesting to note again how Chadwick’s oeuvre escapes the narrowing machinations of the art market that Williams observes. Working on an ‘Artist in Industry Scheme’ placement with Yorkshire Arts and John Smith’s Brewery around the north of England during 1981, Chadwick produced ‘Fine Art/Fine Ale’ (a project where, a bit like Cedric Price, she ended up even designing the beer mats). For her, there was no need for this (art)work to encounter the artworld, as she wrote in her notebook at the time: ‘no need to go into gallery – the art will turn up in pub from where work was carried out. Return to original source, seen by those who form consumer side beer industry in ‘promotional’ form also sympathetic to production + managerial side of trade. Good relations.’

This particular interest in CONSUMPTION (another of William’s Keywords) is also quietly legible in Of Mutability, which was produced using the tools and techniques of 1980s office culture & society; photocopiers, raised access computer flooring, early CAD draughting technology and printing, as well as the fish-tank technology already mentioned, deploying these low-tech means and materials to turn ‘rubbish’ (literal and metaphorical) into something approaching gold/art.

It is in this piece that Chadwick’s enduring interest in MYTH is perhaps most legible. Leaving aside Raymond Williams’ sketch of MYTH as fable, Chadwick’s work, and Of Mutability in particular, enjoys the full ambiguity of his other analysis – ‘exceptionally intricate internal and external controversies’, coming into use in a ‘period of the disintegration of orthodox religion, it has…become involved with the difficult modern senses of imagination, creative and fiction; and has been used both to illustrate and to analyse “human nature” in a distinctively post Christian sense.’ Linking back to some kind of ‘origin’ – the Garden of Eden in the Oval Court – Of Mutability also looks forward to an end, represented in Carcass. It declares Chadwick’s take on human nature most clearly.

Stephen Walker is Reader at The University of Sheffield and his new book is Helen Chadwick: Constructing Identities Between Art and Architecture. He is the author of Gordon Matta-Clark: Art, Architecture and the Attack on Modernism and co-editor of Agency: Working With Uncertain Architectures.

Arthur Koestler, The Sleepwalkers: A History of Man’s Changing Vision of the Universe [1959], Penguin, London, 1982, p.9