In the year and a half since the new leadership of Xi Jinping and Le Keqiang came in to power in China, the overriding characteristics are already clear.

In China, Xi Jinping has consolidated power far more quickly and completely than had been anticipated by many analysts and observers. He became leader of the Communist Party and Chair of the Central Military Commission in November 2012, and President in 2013. This has given him a higher degree of control over the key sources of power, military, party and government, than his predecessors Jiang Zemin and Hu Jintao. On paper at least, he dominates the domestic leadership terrain in China. Even more remarkable is that he has also had a big impact on the ideological and strategic space. The two prongs he has used to achieve this are through a high profile campaign to clamp down on corruption, and the theme of the `China Dream’ which has been pursued through speeches and articles.

The anti-corruption campaign has both a broad strategic purpose to deliver more efficiency in the economy  and a brute, highly localised political one. The latter has honed in on the networks around the state owned petrol sector and former security chief and Politburo member Zhou Yongkang.This attack under the guise of anti-corruption action has cleared away a threatening network, one which during the fall of Bo Xilai, showed opposition to his removal and therefore disloyalty to Xi (Zhou Yongkang was the only senior leader at the time who showed signs of dissent). Besides gains in the political dimension, the campaign against corruption also gives populist rewards for Xi. It plays well with large and important constituencies in China who now belong to an urban middle class or rural elite who are fed up with rent seeking, ‘greedy’ officials. While Xi’s attack is on only a small number, the ways in which government entertainment has been scaled back, and officials have had to change their public behaviour has been significant enough to put some luxury restaurants and hotels out of business. For Xi, clamping down on corruption is a double happiness – it clears away disloyal foes, and it garners public support.

The populism is clear in another area too. Since the Party Plenum meeting in late 2013, the primary theme of reform has emerged more strongly in the Xi leadership. Everyone loves reform in China. The word has been associated with all the good things that have happened since 1978 and the dawn of the Deng opening up era. But as experts at the Central Party School said in 2009, the issue is not whether reform should happen, but in what areas, how quickly, and in what way. The Chinese leadership had always placed its importance on first and foremost economic development. However there is a gradual shift to a new Chinese development model being implemented by the Xi leadership through its ‘China Dream’ theme, and one that looks likely to shift into increasingly social and political areas.

Provincial and national leaders must still produce growth. The quandary now however is that the era of double digit rapid raw GDP growth under Hu Jintao and Wen Jiabao, the leaders from 2002 to 2013, is over. The easy pickings have all been harvested. 7.5 per cent growth was the declared figure at the National People’s Congress of early 2014. This is a good growth rate but it is significantly lower than its previous soaring numbers in the last decade. High growth meant that the vast, complex new rural and urban groupings in China across its 31 provinces and autonomous regions could believe, even if life was tough, that good times were around the corner. Lower growth means that optimism is a little diminished, and the incentives the Party can offer people are reduced. There is simply less to go round.

What does this new model of development in an era of lower growth look like? Premier Li Keqiang has spoken about this in most detail as he is the key macroeconomist in the leadership. In the past, the onus was on capital investment in fixed assets, accepting inequality while maintaining high GDP rates, and having a low consuming, low service sector, export orientated model. But with growth falling, the Party has to find a new strategy. Li has set this out in four key areas: urbanising, service sector, domestic consumption and fiscal reform. By 2020, when China is due to become a middle income country with a per capita GDP of USD12 thousand, double that of today, the country must have radically urbanised, with the 50 per cent living in cities rising to 70 per cent in 7 years. It will need to move from 40 percent service sector of today to 60 percent, and raise domestic consumption from 36 percent to over 50 percent. As will be explained later, local governments will also require more fiscal powers. Li Keqiang’s vision of the perfect Chinese citizen in 2020 is of an urban dwelling, service sector working, high consuming, home owning, tax payer.

To achieve this, the leadership will have to sell the advantages of this urban, service sector, consuming lifestyle to rural dwellers, the migrant labourers, and those who have already sacrificed much to contribute to China’s development in the last three decades. But more is now expected. Thus the importance of the `China dream’ as a mobilizing and incentivising discourse.This `dream’ as Zhou Tianyong, a highly regarded economist at the Central Party School has explained, is the chance for most Chinese people to live in a nice environment, have rewarding careers, enjoy a high standard of life, and regard themselves as equal citizens of a nation which is reacquiring its status as the region’s leading country, and a major player on the world stage. In return, however, this new burgeoning middle class are likely to want better government service, more participation in decision making and more status for themselves. This starts leading clearly into areas not just of economic or social reform, but political reform. For the leadership, the mantra used since 1980 of economic outcomes being the greatest benchmark for government becomes less true. From here on in, politics will become increasingly crucial.

The potential for political change thus must be examined. The Party which Xi leads has never accepted competition for power. Since its victory in 1949, it has dominated political space in China, and even now Xi has mandated clamp down campaigns on rights activists and dissidents that challenge this. There is, however, a clear sense in which the Chinese elite are wrestling with their biggest strategic question – the question of when the current governance model that their country has will become not an aid to growth but an impediment. This has led the National People’s Congress, China’s annual parliament, to discuss once more the issue of rule of law in China. This is the core area. The simple fact is that currently, the Party has a privileged space, where it remains uncontested. It has its own constitution, and it remains above the law. Its governance is performed by itself, on itself. But there are many issues over the real effectiveness of this idea of an entity being its own judge and jury that give rise to scepticism even in China.

Xi and Li will need to make a tactical judgement about when, and how, the Party has to cede space in this crucial area, as it seeks a more modern, sophisticated economic and social model. In more complex areas,such as efficiency in administration, this will almost certainly lead to greater decentralisation of powers. The highly centralised fiscal system where 70 per cent of taxes are raised by Beijing and then redistributed to provinces will need to be relaxed. Local governments who are no longer able to sell off land to plug budget deficits (simply because there is little land left to sell) will need to be trusted, and empowered, to raise some of their own taxes. The crucial mission of the Xi and Li leadership is the hunt for growth through efficiency. This is the compelling narrative across all their political and administrative action. Efficiency is their ally in preserving the levels of growth they now have, in introducing deeper social equity in a society which has growth critically unequal, and in buying the loyalty of their core constituencies within China.

The overriding characteristics already clear in a year and a half of the new leadership under Xi Jinping and Le Keqiang can be summarised as a leadership focused on tactical reform, one challenged by a falling growth rate which they need to preserve by efficiency in governance and economic management, the key being the fight against corruption and one that is also implemented through mobilising society by deploying soft nationalist messages about the rising status of their country seeking to become a `rich, strong nation’ through its ‘China Dream’ rhetoric. These are the incentives that this leadership will use as they assist China to become a country where the GDP will have doubled from levels in 2013 by 2020. The Xi Li leadership is finally a ‘political’ one, for it is the politics of China, not its economy that will present the deepest challenges for this leadership in the coming seven years. ■ 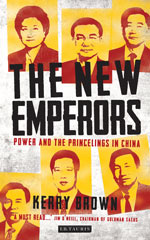 Kerry Brown is the author of our new book The New Emperors: Power and the Princelings in China. Director of the China Studies Centre at the University of Sydney and former head of the Asia Programme at Chatham House. With 20 years experience of life in China, he has worked in education, business and government, including a term as First Secretary at the British Embassy in Beijing.