Alexa Wright / Painting of the Week 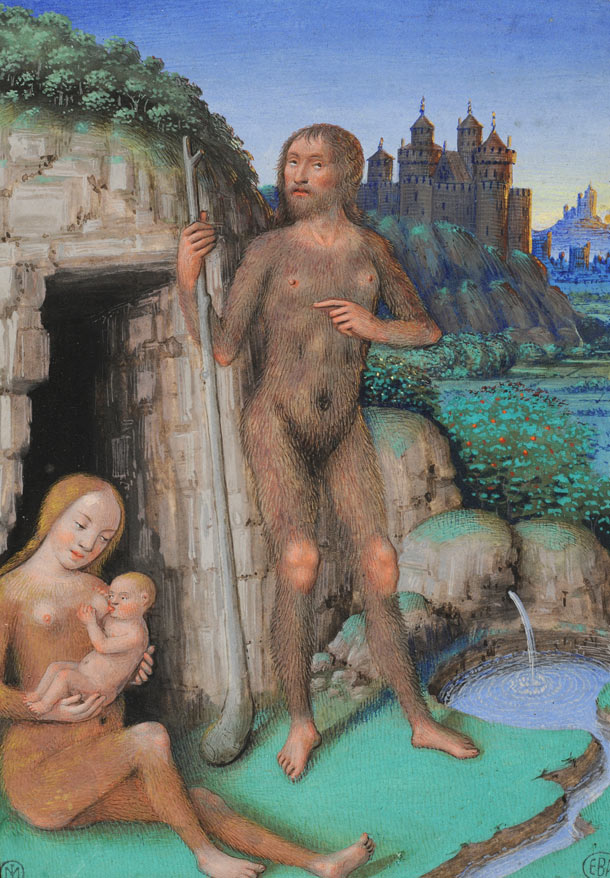 Throughout the Middle Ages wild men or ‘wodewose’ (men of the woods) were believed to dwell at the outer edges of the Western world. Favouring liminal or boundary zones, where one state of existence gave way to another, they inhabited the largely unexplored forests and mountains that surrounded European towns and cities. These primitive social outsiders combined human and animal, natural and unnatural attributes, but they were not strictly monsters. Nor were they fully human. Acting as a projection of social anxieties and fears, they embodied complex and shifting perceptions of the relationships between nature and culture, humans and animals, self and other.

If, as Hayden White has argued, the wild man of the Middle Ages represents ‘a projection of repressed desires and anxieties’ regarding the relationships between society and nature, humans and animals, the much less common wild woman, as depicted here by Jean Bourdichon, seems to be a symbol of more specifically sexual, or gender-related, anxieties. Like her male counterpart, the wild woman is depicted as either abhorrent or seductive, acting as an incarnation of anxiety on one hand and of desire on the other. Embodying either a negative or positive female stereotype, the wild woman is sometimes portrayed as a dangerous, ugly and hairy seductress, or alternatively as a passive and dependent wife and mother living an idyllic rural life with her wild man husband and children. Whilst there are fewer available images of wild women than wild men, art historian Richard Bernheimer has argued that ‘her presence is recorded in areas which either never possessed any wild man mythology or have allowed it to fade out’. According to Bernheimer, the nature of the wild woman was particularly diversified because of the variety of her habitat, which extended from forests and mountains to plains. Wild women living in the mountains were supposed to be giant ogres, enormously strong, appallingly ugly and prone to eat human children. In this abhorrent incarnation, their bodies were bristly all over, their hair wild and full of lichen, and their breasts so long that they dragged on the ground. By contrast, wild women who lived in the milder landscape of the plains were reportedly smaller, gentler and more retiring. They were hairy and clad in moss, with wrinkly faces, but long silken hair.These images seem to suggest that the main role of the wild woman was either to reinforce ‘man’s’ sexual dominance, or to embody a fear of his own sexual nature. The most persistent trait of any lone wild woman was an obsessive craving for the love of ordinary men, which was often achieved by using disguise and deception. AW

Alexa Wright is Reader in Visual Culture at the University of Westminster and author of Monstrosity: The Human Monster in Visual Culture of which this article is an edited extract from. She is also a practising artist who works with video, sound and interactive digital media www.alexawright.com.