US landmine policy has long been at odds with NATO allies and in the uncomfortable company of Iran and North Korea, but as Matthew Bolton there are signs this is beginning to change.

Imagine never knowing whether your next step will be your last, whether your children are safe in the fields around your house, whether objects they find in the street are toys or deadly explosives. For people living where landmines lie in wait long after wars end, such frightening thoughts are daily realities.

‘The humanitarian impact is heartbreaking,’ said Kiman Lucas of Clear Path International, which assists landmine survivors. For almost two decades, US landmine policy has been at odds with NATO allies and in the uncomfortable company of Iran, North Korea, Cuba and Syria. ‘Everywhere I go,’ Lucas told me, ‘people question why the US has not already joined the landmine ban treaty.’

But without much fanfare last week, representatives of the State Department announced subtle but crucial changes to the US government’s stance, distancing itself from the unilateral tone of Bush-era policy.

The new policy will halt US production or acquisition of antipersonnel landmines, reduce stockpiles and begin ‘diligently pursuing solutions that would be compliant with the convention and that would ultimately allow us to accede to the convention.’ The Pentagon has also clarified the number of landmines in its stockpiles – 3 million (contrary to earlier estimates of 10 million) – and released details on its ongoing destruction efforts.

‘The US has finally come out of the shadows in indicating it intends to join the landmine treaty, and let’s hope it will move ahead rapidly to come on board,’ said Steve Goose, arms director at Human Rights Watch, one of the leading members of the US Campaign to Ban Landmines.

Why I Worry about Landmines

‘Landmines don’t distinguish between friend or foe, old or young, combatant or civilian,’ Jody Williams, recipient of the 1997 Nobel Prize for Peace for her work coordinating the International Campaign to Ban Landmines (ICBL), told me. There have been at least 90,000 casualties – mostly civilians – of landmines and similar devices since 1999.

For me, landmines are not an abstract concern. Ten years ago, I volunteered helping displaced people return to the one of the world’s most mine-affected places, in northern Bosnia. I learned to think twice before ever stepping off a road, into a yard, into a forest.

Since then, I have dedicated my academic career to learning how the people I met in Bosnia – and later travelling in Iraq, Afghanistan and South Sudan – could overcome the dehumanizing violence of landmines. I’ve learned that landmines kill civilians and don’t win wars. And I’ve discovered that the landmine crisis is not an insurmountable problem.

Advocacy by the ICBL resulted in a treaty banning antipersonnel landmines in 1997, signed now by 161 countries. This caused a dramatic drop in landmine use and greater investment in clearance, victim assistance and risk education. In ten years, the number of new casualties reduced from 20,000 to fewer than 4,000. Deminers have cleared or verified almost 2,000 square kilometers of land, removing 3.3 million landmines.

But declaring victory would be premature. The renewed danger in the Balkans following the recent floods – which washed landmines into previously safe areas – dramatically illustrates how much work is left to be done. Fifty-nine countries are still affected by landmines. Casualty rates remain high in many of them, particularly Afghanistan (766 people in 2012) and Colombia (496 people).

And a few hold-out countries still have not joined the ban, including Syria, North Korea, Iran and, yes, the United States of America.

Back when he was running for president in 2008, Barack Obama promised he would ‘lead the way’ on ‘international initiatives to limit harm to civilians caused by conventional weapons.’ It’s one of the reasons I voted for him.

But once in office, Obama kept in place the Bush administration’s ambivalent landmine policy (which he put under  ‘review’ since 2009) rather than joining the ban. This put the US at odds with all of its NATO allies, the entire EU and every country in the Western Hemisphere except Cuba.

‘Our military does not depend on anti-personnel landmines,’ Tim Rieser, foreign policy aide to Senator Patrick Leahy (D-VT), a key supporter of the treaty, told me. With today’s wars’ rapidly shifting frontlines, ‘You don’t want to be dispensing landmines in areas that you may have to cross in a few minutes or hours.’

The US has not produced antipersonnel landmines since the first Gulf War and has only laid one (in Afghanistan in 2002). Perhaps motivated by global criticism, the US is also the biggest donor to landmine clearance and mitigation programs.

‘As a practical matter the U.S. is in compliance with the key elements of the treaty, but the absence of the U.S. provides an excuse for other governments to continue using mines,’ Rieser told me.

By acceding to the treaty, said Nobel Laureate Jody Williams, the US would ‘end the contradictory message’ of the last 15 years and send ‘an unambiguous message in support of survivors.’ Heidi Kuhn of landmine clearance charity Roots of Peace agrees, saying ‘leadership effort’ on landmines from Obama would create “a positive ripple effect” in global goodwill.

So what’s taken Obama so long? In my research I’ve found that persistence of landmines in a former war zone is usually linked to more complex ‘political minefields’ – embedded social tensions, polarizing rhetoric, vested interests and militarism. This is as true at the global level as in mine-affected communities.

The new policy statement is a major step in the right direction. But the ill-informed and callous backlash (the Wall Street Journal actually published an editorial titled ‘In Defense of Land Mines”), the Obama Administration could be tempted to make a half-hearted triangulation short of a ban. Just as it takes courage to defuse explosives, it will take political audacity to demine America’s political landmines and join the global treaty. But the costs of current US policy – in diplomatic, moral and humanitarian credibility – are too high.

‘The Obama Administration finally took a step – an incremental step but a significant one – to put the United States on a path to join the treaty,’ said Senator Leahy in a speech on the Senate floor today. “Rather than opposing a treaty that will make it a war crime to use landmines against our troops, why not support the mine breaching technology they need to protect themselves?’

To make change landmine survivors, deminers and human rights activists can truly believe in – completing the promises he made back in 2008 – Obama must add his signature to the list of 16 Nobel Peace Prize Laureates, 68 Senators from both parties, US military personnel, arms control experts, almost 100 leaders of US humanitarian agencies and more than 200,000 Americans who are calling on the US to join the landmine treaty. ■

This article originally featured at The Duck of Minerva. 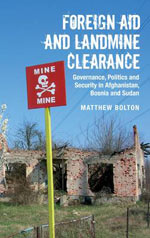 Matthew Bolton is author of Foreign Aid and Landmine Clearance: Governance, Politics and Security in Afghanistan, Bosnia and Sudan and Assistant Professor of Political Science at Pace University, and Landmine Monitor Researcher. His new book Political Minefields: The Hidden Agendas Behind Clearing the World’s Landmines is out in 2015. He blogs at Political Minefields and can be found on Twitter @politicalmines.

Image of US soldiers removing landmines via Wikicommons.