Sanctity Pictured: The Art of the Dominican and Franciscan Orders in Renaissance Italy, is the new book by our fine art imprint, Philip Wilson Publishers, exploring the role of the two major new religious orders in the revival of the arts in Italy during the period 1200 to 1550.

Italy in the thirteenth century was transformed by two new religious orders, the Dominicans and the Franciscans. Whereas earlier religious orders had secluded themselves in monasteries in the countryside and lived off income from their property, the Dominicans and Franciscans settled in urban centres and lived as mendicants, or beggars, administering to the laity. The founding members of both orders took a vow of poverty, yet soon after their deaths their successors were building churches that rivalled cathedrals in size and splendour throughout Italy. The friars and nuns of these orders created a tremendous demand for works of all kinds – painted altarpieces, crucifixes, fresco cycles, illuminated choir books, and liturgical objects – to decorate their churches.

Sanctity Pictured accompanies an exhibition –  opening today – at the Frist Center for the Visual Arts (31 October, 2004 – 31 January, 2015), and is the first major study to examine the art of these rival religious orders together, exploring the ways in which they used art as propaganda to promote the charisma of their saints and to articulate their revolutionary concept of religious vocation.

Below we have put together a selection of works featured in the book and exhibition. You can discover even more about these works by downloading this free extract. 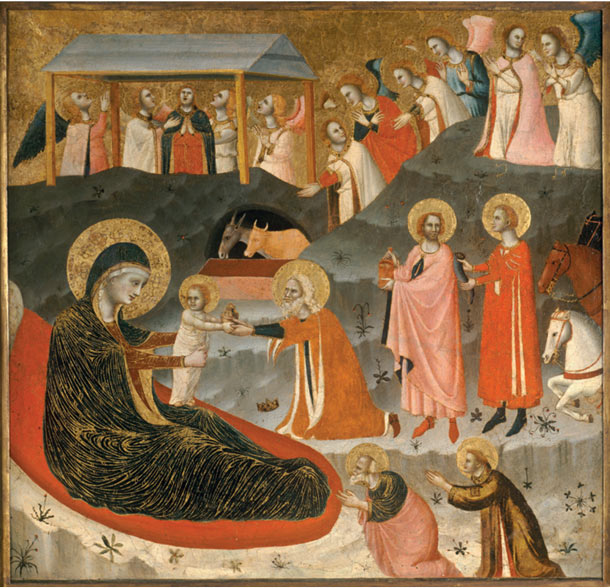 A panel believed to be a fragment of a long rectangular altarpiece composed of three scenes arranged in a horizontal series and divided by a decorative border, The Adoration of the Magi is a nativity set in a dramatic, rocky landscape, with the reclining Virgin and her infant son taking centre stage. The panel was documented in Rimini in the seventeenth and eighteenth centuries in the now-destroyed convent of Santa Maria degli Angeli, the home of a female penitent community founded in the early fourteenth century by the Blessed Clare of Rimini

Born in Rimini in the 1260s, the Blessed Clare was a wealthy laywoman who lived entirely for her own lascivious pleasure, until she began visiting the Franciscan church of San Francesco in Rimini, where she heard heavenly voices and received ecstatic visions inspired by the works of art she saw there. After her religious conversion, Clare devoted her life to voluntary poverty and extreme asceticism. In penitential performances akin to those of Saint Francis, she publicly reenacted Christ’s Flagellation and Way to Calvary, stripping to near nakedness and ordering servants to flog her, later dragging a heavy beam balanced on her shoulders. Clare practiced her piety alone until about 1306, when a small group of female followers joined her at the convent of Santa Maria Annunziata, which was administered by local Franciscan friars. However, she never officially joined any religious order and did not remain cloistered, as did most mendicant women of her time. She probably died about 1326 and was beatified in 1784.

This panel is a fragment of Sassetta’s Borgo San Sepolcro Altarpiece, a double-sided polyptych installed in 1444 on the high altar of San Francesco in the Tuscan town of Sansepolcro. With members of the Franciscan order encouraged to take up the cross and follow Christ, the Procession to Calvary became common in Franciscan art. The rope too had special meaning for Franciscans, who tied a thrice-knotted rope around their waists to symbolize their vows of poverty, chastity, and obedience. Sassetta represents Francis from the back to give greater prominence to his tonsure (the practice of cutting or shaving some or all of the hair on the scalp), which all friars took as a reminder of Christ’s crown of thorns. In this way, the Franciscans were again expressing their central belief in Francis’s being an alter Christus. 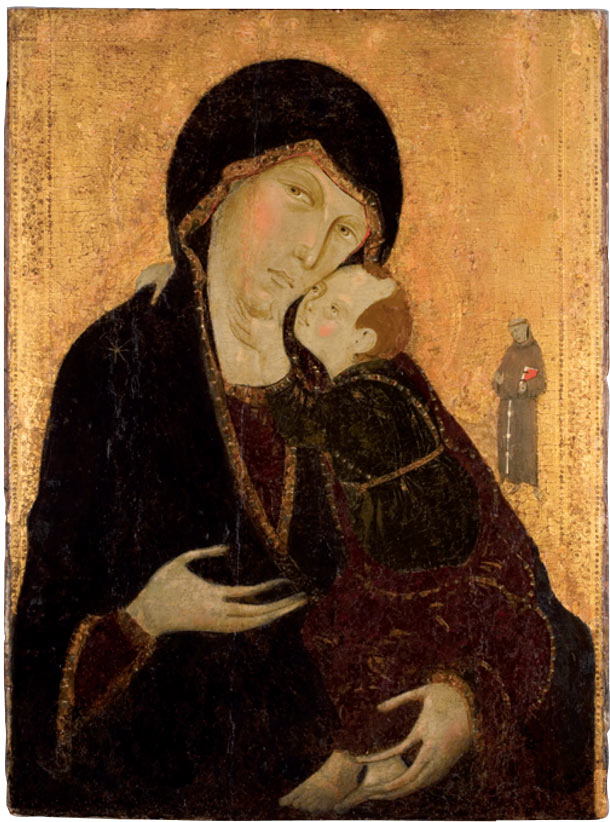 One of three late thirteenth-century Sienese or Florentine panels that depict the Madonna and Child posed similarly, the gesture of the Child’s hands, one of which caresses the chin of the Madonna while the other embraces the shoulder, has no precedent.

The visual power of the piece comes from the way the Madonna and Child touch, flesh to flesh: his hand cradles her chin, their faces are pressed together, and three of her fingers tenderly support the sole of his bare foot. These naturalistic gestures emphasise Christ’s humanity—indeed, his carnality—just as the visible stigmata of Saint Francis (who stands just to the right of the Virgin and Child) emphasise the saint’s role as alter Christus (another Christ) and constitute a direct visual link to the Christ Child’s eventual bodily torture and death. Such iconography points toward a use in private devotion, facilitating the viewer’s meditation on the bodily reality of Christ.

This small narrative panel by the Sienese painter Giovanni di Paolo depicts a miracle of Saint Clare of Assisi. It is the only known representation of this subject. The miracle relates to a narrative by Thomas of Celano of a woman named Bona of Monte Galliano who has lost one of her sons to wolves terrorizing the land. She tearfully begs Saint Clare to save her second son, who has also been taken. Neighbours found the child alive in a nearby wood, being tended by a dog licking wounds in his neck and side. On the panel, a young mother with long, flowing hair like that of Mary Magdalen, a sign of distress and mourning, kneels in supplication to Clare, who emerges amid rays of light in the upper right corner, her arm raised in a blessing gesture. In the centre, a bleeding child, whose arm has been bitten off and is still in the wolf’s mouth, looks back toward his mother. The wolf appears a second time, in the lower right, dead and rigid. Paring the cast of characters down to the key players of child, mother, wolf, and Clare, Giovanni di Paolo spotlights the saint’s miraculous intervention.

The Franciscans chose to promote Clare aggressively in Siena in the mid-fifteenth century—the time when a local female Dominican, Catherine of Siena, was under consideration for sainthood. She would be canonized in 1461. Through such striking portrayals of heroism as seen on this panel, the Franciscans highlighted the power of their own female saint at a time when a new female Dominican saint was being celebrated. ■

Sanctity Pictured: The Art of the Dominican and Franciscan Orders in Renaissance Italy runs at The Frist Center for Visual Arts from 31 October, 2014 – 25 January, 2015.