Recent debates about the fragmentation of the National Health Service that have coincided with the release of Nicklaus Thomas-Symonds’ Nye: The Political Life of Aneurin Bevan (out today) has served to reinforce – if such reinforcement were needed – that Nye Bevan’s greatest achievement was the creation of this British institution. It is unsurprising then that this single accomplishment defines the collective memory of Bevan. It is a living, breathing example of his democratic-socialist principles, deployed to empower the British people he represented and served unremittingly, and brilliantly.

Beyond the NHS though, it is worth considering Nye’s legacy to British politics in a wider sense. Here, Nicklaus Thomas-Symonds has drawn up ‘five-lessons’ to illustrate Bevan’s deep and lasting political impact.

A shift in British attitudes

On 21 March 1949, Time magazine featured Bevan, who had stood ‘amid the tall black blocks of Bolton’s cotton mills in Lancashire and told the assembled workers: ‘homes, health, education and social services – these are your birth-right.’ Time distinguished between these values and those of John Locke: life, liberty and prosperity, and said that more British people now agreed with Bevan, rather than Locke. This is indicative that in establishing the NHS, and the principle of healthcare free at the point of delivery, Bevan did more than establish a much-loved public service. He had changed the British attitude to social services. The debate in US politics about President Barack Obama’s Patient Protection and Affordable Care Act 2010 points up a difference with the UK. In the US, the debate is still on the values of Locke, and the freedom of individuals not having to take out health insurance, and the freedom of the states in not participating in a federal programme; in contrast, Bevan made healthcare a right.

Politics is about the flourishing of individuals through collective action

Bevan was inspired by the Uruguayan writer Jose Enrique Rodo. He often read aloud from his book The Motives of Proteus, emphasising its argument that society should not be uniform, but should look to raise every person to the fulfilment of their unique potential. Bevan’s idea that the individual is powerless in the face of the financial power of large corporations has a modern resonance. To use Bevan’s words, our challenge today is about more than the British people conquering the ‘commanding heights’ of the domestic economy: it is how the world’s citizens can exercise democratic control over the ‘commanding heights’ of the world’s capital markets.

The importance of the Labour Party as a vehicle of progress

Nye Bevan never lost his belief in the Labour Party. In August 1932, under the chairmanship of Fenner Brockway, the Independent Labour Party finally decided to disaffiliate from the Labour party itself. Bevan’s remark to his later wife, Jennie Lee, herself an ILP-er, when they discussed this is revealing. Quoting Hamlet to Ophelia, he told her, ‘Why don’t you get into a nunnery and be done with it? Lock yourself up in a separate cell away from the world and its wickedness. My Salvation Army lassie. Poor little Casabianca… I tell you, it is the Labour Party or nothing.’ As Bevan was later to say of David Lloyd George in his years as leader of the declining Liberal party: ‘…even the most superabundant personal qualities are irrelevant if not associated with great mass machines.’

Being proud of being Welsh and British

After the recent experience of the Scottish independence referendum, this seems an apposite contemporary lesson to draw from Bevan’s career. In 1958, the Royal National Eisteddfod was held at Ebbw Vale. Bevan, as the local MP, and an English-speaker, was unable to preside over a day’s events, because of the ‘all-Welsh’ language rule. Instead, he presided over a hymn-singing meeting prior to the formal opening of the festival. His guest was his friend, the African-American actor-singer Paul Robeson. Bevan came from a distinct Welsh tradition. He was a Monmouthshire man, the predominantly English-speaking area of south-eastern Wales. Monmouthshire had been treated as an English county in statutes since Henry VIII’s Act of Union with Wales in 1535. Specific references to Wales in acts of Parliament usually referred to ‘Wales and Monmouthshire.’ Bevan reflected on this division, seeing the fact that the Eisteddfod was being held in Ebbw Vale as symbolic: ‘If the spirit of the Eisteddfod is to become universal then the walls dividing nations must be broken down…’ (The Times, 28 June 1958). Bevan saw problems in socio-economic terms for the working-class across the UK, but he was also very proud of being Welsh, and called for the end of the use of the phrase ‘Wales and Monmouthshire’

The central importance of local politics

The Tredegar Medical Aid Society, founded in 1890, was a model for the NHS. Members paid a contribution in return for healthcare free at the point of delivery. Bevan built upon this idea, but ensured that the NHS was paid for from general taxation, rather than specific payments. Bevan served on the Tredegar Urban District Council from April 1922 until June 1929, when he resigned after his election to Parliament. His priorities were public health and housing. His insistence on quality housing for working people, rather than a lower standard produced more quickly, was the same approach he took to house-building when he was Cabinet Minister.  On 5 September 1925, the Merthyr Express reported Bevan’s opposition to poor housing expressed in typically colourful terms: ‘A rabbit warren house led to a rabbit warren life.’ Bevan also served on Monmouthshire County Council.  He was first elected in March 1928, before losing his seat in March 1931. He was then re-elected in February 1932, before finally standing down in March 1934. He was given a direct insight into the chronic underfunding of local government, and became convinced that county councils were vulnerable to cuts in central-government funding. In Cabinet in 1945, he argued for the hospitals to be nationalised, not run by local authorities. ■

Nye: The Political Life of Aneurin Bevan is out now. 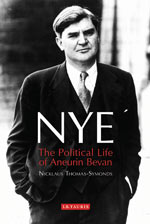 Nicklaus Thomas-Symonds is Lecturer in Politics at St Edmund Hall, University of Oxford, and a Fellow of the Royal Historical Society. He is the author of Attlee: A Life in Politics.

2 thoughts on “‘Five lessons’ we can learn from Nye Bevan”