All botanists yearn to discover and have a plant named after them, and such an honour befell Christopher Gardener when researching – with Basak Gardner – our new book, Flora of the Silk Road. 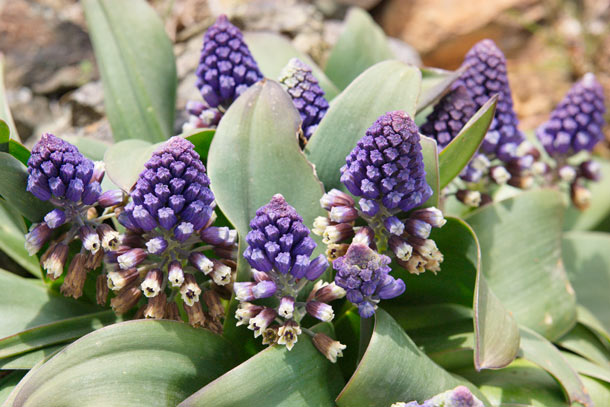 Visiting the little explored Anti-Taurus Mountains near Malatya, Turkey, Christopher discovered a small bellevalia with distinctive broad leaves. Collecting a few for sampling, initially it was thought to be a form of Bellevalia glauca, known from northern Iraq. Closer examination by a team of four Turkish botanists – Hasan Yildirim, Yusuf Altioglu, Bilal Sahin and Serdar Aslan – suggested it was a new and rare Bellevalia, and has now been named Bellevalia chrisii (pictured above) after him.

Endemic to this one area of mountains, and with a small population of only a couple of hundred plants, there are genuine concerns of extinction. Upon the discovery of Sternbergia candida in the 1970s within no time many were offered for sale and hundreds stripped from accessible locations.

Out in the new year, Flora of the Silk Road is a pictorial celebration of the plants and scenery to be found along its 5,000 miles. Embracing Turkey, Syria, Lebanon, Iran, Central Asia and China more than five hundred of the finest wild flowers are depicted together with the beautiful landscapes in which they were found. Including, of course, Bellevalia chrisii. ■

Chris and Basak Gardner have lead specialist botanical and wildlife tours worldwide for many years, particularly in the countries of the Silk Road. Both are professional botanists with extensive experience in identifying and photographing flowers. Chris is also an experienced garden designer and co-author of the successful book, The Plant Hunters (1998). Basak was Head of Herbarium at Nezahat Gokyigit Botanic Garden in Istanbul.