The man who made modern China, Deng Xiaoping is seen by its current leaders as the model to be emulated.

Deng Xiaoping was the man who made modern China. He led the country out of the Maoist era in 1978 when he forced a reluctant Chinese Communist Party (CCP) to accept a comprehensive programme of economic reforms that was the basis for the spectacular rise of China. He died in 1997 but is still remembered by the party and the people as the man who created a system in which most of the population enjoy far greater economic freedom than at any time since the foundation of the People’s Republic of China in 1949.

His name is less familiar in the West than it was in his heyday but he should be remembered as he embodied the positive and negative aspects of China’s rise to global prominence. He embraced the ideas of economic reform and the opening of China to the outside world but he was never convinced of the need for political democracy of the Western multi-party variety. Deng is also largely remembered in the West  for the Tiananmen Square demonstrations. meant for many outside China, which occured under Deng’s rule. Although other political and military leaders were arguably far more culpable, the events have come to frame what little most of us knew about the country, cementing, or perhaps creating, the image of China as a totalitarian country where people lack personal freedom.

A political figure whose influence continues to affect policy and strategy in China, Michael Dillon – author of the new book Deng Xiaoping: The Man Who Made Modern China – looks at the key factors making Deng’s leadership a mode to be emulated by today’s government.

Although Mao’s portrait still overlooks Tian’anmen Square and no official publication will deny the importance of his legacy, Deng Xiaoping is seen by the current leadership as the model to be emulated. In August this year, after the annual closed summer session of the Politburo in the seaside resort of Beidaihe, the mainland media celebrated the 110th anniversary of the birth of Deng Xiaoping. On 13 November, People’s Daily the CCP’s official newspaper carried a report of a speech made by Xi Jinping, President and CCP General Secretary, at Shenzhen just north of Hong Kong, describing him as the ‘new architect of reform’. Deng was the original architect of the economic reforms so Xi is presenting himself as the heir to the Deng legacy in a way that other post-Deng leaders have not.

Shenzhen is the best known of the five Special Economic Zones in which Deng’s reforms were pioneered. The SEZs were a complete departure from the centralised planned economy of China in the 1970s and within the Communist Party there were reservations and some outright opposition to them. The Southern Tour which Deng undertook in 1992, at the age of 88, saved the SEZs and the economic reform programme as a whole, as Deng travelled to meet key provincial leaders to persuade them that there was no alternative to these innovations. Deng later regretted that he had not included the city of Shanghai in the list of SEZs but it seems to have managed to develop adequately in spite of that and by the 1990s the development and growth that had been seen in the SEZs was appearing in many other cities.

Economic democracy but not political democracy

If Deng can be credited with China’s booming economy he must also be criticised for the lack of political democracy. In 1981 he had the opportunity to allow greater freedom of expression when demands for political reform appeared on Democracy Wall during what became known as the Beijing Spring. The popular movement for greater democracy was tolerated briefly but then suppressed as the more conservative party leaders considered that it threatened their authority. Deng conceded this and concentrated on economic modernisation, partly because he knew there would be less opposition. Beijing’s current policy, that Western multi-party democracy is not suitable for China, owes much to Deng’s political actions and attitudes.

Deng might be best known for the economic reform programme but his diplomatic strategy for opening up China, including rapprochement with former enemies, the USA and Japan, was an equally important part of China’s rise.

Photographs of Deng wearing a ten gallon hat during a visit to the USA went around the world and were a signal of China’s new relations with the rest of the world. This was a dramatic contrast to Mao Zedong who could not be imagined doing such a thing and had never ventured out of China since his disastrous political visits to Moscow in the 1950s when he failed to negotiate with Stalin. Deng also visited Japan and he and his wife were photographed with Emperor Hirohito, who had been on the throne during the occupation of China, and the Empress.

The concept of ‘one country two systems’ emerged in the 1980s. This unprecedented formula is attributed to Deng and his imprimatur was necessary for its implementation. It made possible the peaceful and relatively smooth transition of Hong Kong’s sovereignty when British colonial rule ended in 1997 and Hong Kong acquired a new and untried status as a Special Administrative Region. Hong Kong became part of China while largely retaining the independence of its political and legal institutions. This independence has not gone unchallenged, notably when Beijing decided to restrict demands for full democracy by insisting on its right to vet nominations of candidates for the post of governor. Supporters of Beijing in Hong Kong acquiesced in this in the face of determined demonstrators, whose occupation of the Central and Mong Kok districts that began in September 2014, and continue to thrive. Deng Xiaoping did not achieve his wish to live to see Hong Kong become part of the PRC and it is difficult not to speculate on what he would have made of the protests. ■ 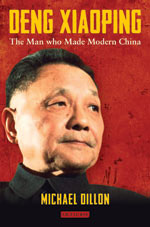 Michael Dillon’s new book is Deng Xiaoping: The Man Who Made Modern China. He was founding Director of the Centre for Contemporary Chinese Studies at the University of Durham, and is Fellow of the Royal Historical Society and the Royal Asiatic Society and was Visiting Professor at Tsinghua University in Beijing in 2009. His other books include China: A Modern History.