Though less celebrated than directors, cinematographers shape the style of a film in important ways: organising the lighting, composing the frame, orchestrating the camera movement, and working with the laboratory to control the film’s overall look. As the art of image making continues to change in the digital age, these five images remind us how well crafted a film’s cinematography could be during the days of black-and-white.

Charles Rosher, one of the best cinematographers of the 1920s, started out as a portrait photographer in London, where he learned how to use light to model the faces of his subjects. Impressed with his ability to craft artful close-ups, the producer-star Mary Pickford hired Rosher as her own cinematographer, and he photographed almost all of Pickford’s films from 1918 to the end of the silent period. This image, from Frances Marion’s 1921 film The Love Light, shows why Pickford put such faith in Rosher. Working with fellow cinematographer Edward Cronjager, Rosher blocks off the edges of the shot to create a circle of illumination in the middle of the shot, where Pickford’s performance demands our attention. Two backlights turn Pickford’s hair into a halo, while two strong lights from the front add points of light to Pickford’s eyes, making her tears seem even more palpable. The result is a classic Hollywood close-up, centering and celebrating the star.

If the image from The Love Light is centralized, then this shot from Josef von Sternberg’s 1934 film The Scarlet Empress is dispersed. Star Marlene Dietrich can be spotted in the lower right-hand corner, illuminated by the top-light that already had become her trademark. But von Sternberg does not want our attention to rest on the star alone, so he packs the frame with cluttered arrangement of eye-catching details: candles, sculptures, arches, drapery, and even a hanging net that softens the entire shot. The resulting image contrasts the beautiful and the grotesque, juxtaposing Dietrich’s face with the top-lit sculptures above her. The stylized film was photographed by cinematographer Bert Glennon, assisted by Lucien Ballard.

Cinematographer Gregg Toland was famous for experimenting with deep-focus photography in his films for directors Orson Welles, John Ford, and William Wyler. In this shot from Wyler’s postwar classic The Best Years of Our Lives, Fredric March’s character watches a friend play the piano while another friend makes an important phone call in the background. Most filmmakers would have broken down the scene into several units, but Toland composes the image in such a way that all three major characters are visible and in focus: one in the foreground, one in the middle-ground, and one in the background. In a famous essay on the director William Wyler, the French film critic André Bazin praised this use of deep focus as a “democratic” gesture, giving the spectator the freedom to choose which storyline to watch. 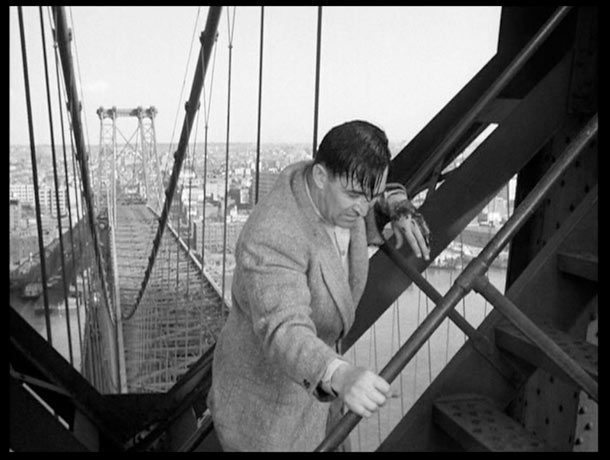 Cinematographer William Daniels had developed a reputation for glamour photography, serving as Greta Garbo’s primary cinematographer for over a decade. In 1948, Daniels got the opportunity to shoot a film noir, Jules Dassin’s The Naked City, which earned the cinematographer his only Academy Award. Much of the film was photographed on location in New York City, as in the climactic scene atop the Williamsburg Bridge. In this image, Daniels uses deep-focus photography to show the film’s villain, in the foreground, against the expansive view of the bridge in the background. The crisp focus calls to mind the work of documentary photographers.

Like Daniels, cinematographer James Wong Howe established his name as a master of glamour, but he later developed a reputation as a realist. Martin Ritt’s 1963 film Hud is a serious drama set in the flat, dry landscapes of West Texas. When the director warned Howe that the film might not provide the cinematographer with many pictorial opportunities, Howe decided to take advantage of the location’s lack of traditional beauty, favoring empty skies over the more dramatic cloudy skies that Hollywood cinematographers normally preferred. In this image, Howe uses vertical lines in the foreground to emphasize the flat horizontality of the landscape in the background. The resulting composition conveys a sense of overwhelming emptiness that is perfectly suited to the film’s story. ■