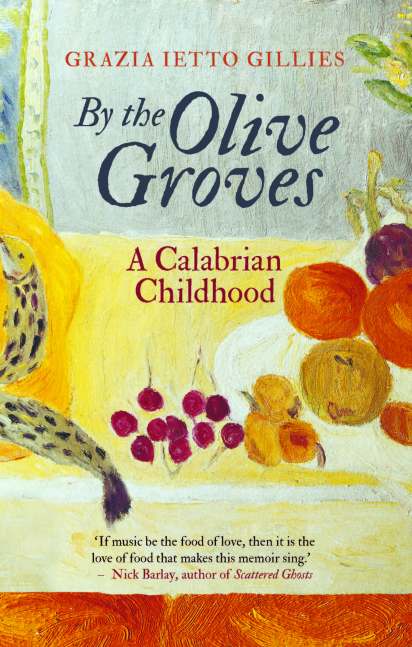 Memories are multidimensional and this is reflected in my book. There are, however, two themes that run across the memoir: the impact that our little Calabrian town and its society had on me and on my family; and food. Food played a vital role in our family life and culture and my mother was at the heart of it. She was an excellent provider of family meals. Her cooking is an important part of this book.  All but three chapters end with Mamma’s recipes. They feature her Calabrian style of cooking based on vegetables, pasta dishes and always on olive oil. ‘Grazia, how can you cook a decent meal if you do not have good olive oil in London?’ Calm and serene, yet strong willed and determined, she would spend the whole morning in her kitchen. As I approached her little culinary reign, I was welcome by the perfume of cooking peppers, beans, aubergines, artichokes, courgettes. Their colours were the real decoration in a kitchen which was simple and lacking modern appliances.

Mamma’s cooking was of the type now identified as ‘Mediterranean cuisine’. It involves no butter, very little dairy produce and little meat. This was not by choice but due to the availability of local ingredients. It so happens that this is the type of food now considered best by the healthcare community. The vast majority of Mamma’s recipes are very easy to cook as well as inexpensive. The last twenty years have seen great changes in the range of food available in developed countries and I can now buy most of the necessary ingredients in my London supermarket. They are not as good as the original Calabrese ones, freshly available when I was a child, but they are good enough to make excellent and healthy meals. Through the years, I have developed my own version of some of Mamma’s recipes to fit in with the availability of ingredients and with the more limited time at my disposal. My approach to cooking and to Mamma’s recipes is that anyone can do it. Cooking is mainly common sense and part of everyday family life. Do not aim for perfection but for healthy, simple, tasty meals. If your dish is not quite as good as you expected, well, it will be better next time. I invite readers to try some of my mother’s recipes and to develop versions to suit their families.

Delianuova, the small Calabrian town at the heart of this memoir, is located on a hill slope between the Aspromonte massif on the inland side and the plain of Gioia Tauro on the Tyrrhenian coast side.  On the inland side the hill leads up to the ‘Piani di Carmelia’, a high-level plain from where a steep ascent takes the determined visitor up towards Montalto and the Aspromonte peaks.  Against local advice, Norman Douglas walked his way up from Delianuova to the peaks and then down to Bova on the Ionian coast in his visit to Calabria of 1911. He walked through groves of chestnuts, beeches, firs and ‘…long stretches of odorous pines interspersed with Mediterranean heath (bruyere), which here grows to a height of twelve feet…’ (Old Calabria, p. 281-82).

On the Tyrrhenian side the land gradually descends towards the sea.  The traveller is taken through magnificent olive groves. Planted randomly through the plain and low hill, the trees have been part of the landscape for centuries. Their large, twisted and gnarled trunks seem at odds with the tiny, delicate, silvery leaves springing from their branches. They shimmer and change colour playing with the sun and being played at by the wind. Moving on towards the coast, travellers pass orange, mandarins and lemon orchards as well as terraces of vines. Occasionally in dry areas the prickly Indian fig plant establishes itself. Near the scattered sequence of small towns and hamlets fig trees huddle against houses for warmth. The hospitality is amply rewarded by their sweet fruits.

The region of Calabria is at the foot of Italy and Delianuova is some 70 km away from Reggio Calabria, the capital of the province and largest local town. Reggio lies on the south west coast of the mainland opposite Messina, on the eastern side of Sicily. It was established by the Greeks – as Rheghion –  in the VIII century B.C.. There followed similar settlements in Locri, Sibari and Crotone all along the Ionian sea. A legend gives Locri the privilege of having been established by Greek women tired of waiting for their menfolks to return from war. Sibari’s riches and indulgent lifestyle proved its downfall: the people from Crotone sacked it and destroyed it in 510 B.C.  Over 1500 years later, it was a local bishop who destroyed the best testimony of Greek civilization in the town. The Crotone Greek Temple was sacked in search of stone and marble to build his luxurious palace. George Gissing’s pain and anger at this act of archeological vandalism is almost palpable in his By the Ionian Sea (p. 48-9) written after his visit in 1897.

Calabria’s history is one of a sequence of invasions, destructions and reconstruction as is most of Italy’s. The local population, the Brutii, were invaded by Greek colonies. The Greeks were gradually displaced by the Romans who in turn were forced out by the Ghots and the Bizantines. Other peoples from the North had a go and stayed for centuries: from the Longobards to the Normans to the Suevians. The French and the Spaniards ruled in centuries nearer ours. Eventually, in 1861 Calabria became part of united Italy, a process that many saw as one more conquest: this time from the King of Piedmont in Northern Italy. His troupes fought and wounded Garibaldi in a famous battle on the Aspromonte plain in 1860. The hero of the Italian Risorgimento handed over his Southern conquests to the King of Piedmont soon to become King of Italy. He also handed over his dream of an Italian Republic. That dream was realized in 1946 following the fall of the fascist regime and the end of the Second World War. Many Italians, including my parents, exercised their newly acquired right to vote with enthusiasm. They voted against the monarchy whom they saw as having supported Mussolini.

International and national events did not always spare this remote town. Pedavoli – one of the two hamlets whose merger later led to the birth of Delianuova – was the site of an uprising and battle against the Bourbons in 1847: just at the time the British landscape painter, poet and traveller Edward Lear was passing through. He was recording Calabria in drawings and words, looking at it with the romantic spectacles of the time (Journals of a Landscape Painter in Southern Calabria).  The revolutionary events forced him to shelve his plan to go through the northern part of Calabria and call short his visit.

Grazia Ietto Gillies was born in Calabria in 1939 and spent the first ten years of her life in Delianuova, a small town in the Aspromonte mountains. She moved to Rome with her family in 1950 and has lived in London since 1971. She has worked and published widely as an academic economist. She has recently branched into literary writing.

By The Olive Groves is published by I.B.Tauris and is available to order here.