To mark London Pride Month 2017, read on for an exclusive extract from Fighting Proud: The Untold Story of the Gay Men Who Served in Two World Wars by Stephen Bourne. 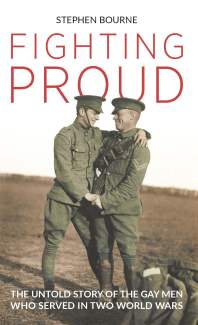 Fifty years on from the decriminalisation of homosexuality in Britain, the book tells a deeply moving new wartime history through the long-forgotten stories of the gay men who served their country. Using private letters, written accounts and long-suppressed wartime photographs, Stephen Bourne tells these remarkable personal stories, bringing an important and overdue perspective to Britain’s wartime story.

This extract features the story of Quentin Crisp, from the Chapter 15: Home Front – Brief Encounters in the Blackout.

DUDLEY CAVE believed that there was a relaxed attitude towards gay men joining the services during the war, but did the authorities turn a blind eye to homosexual practices on the home front? Were the police too preoccupied with war work to concern themselves with men having brief encounters in the blackout with other men? On the whole, on the home front, gay men like Quentin Crisp and heterosexual men looking for same-sex encounters enjoyed a certain amount of freedom. They were aware they could be killed at any moment by one of Hitler’s bombs, and so they seized any opportunity that came their way for a bit of fun.

the most visible – and therefore the most despised, beaten and spat-upon – gay man in Britain […] His crusade was to make people understand that effeminate homosexual men like himself existed. His weapons were hennaed hair, long finger nails, mascara and lipstick. His philosophy was total self-absorption and passivity. His Holy Land lay between Soho and Chelsea.

In 1939 there was one gay man who befriended Crisp, the photographer Angus McBean. They also became occasional bed fellows. He described Crisp as ‘one of the most beautiful people I have ever photographed’, and Angus’s biographer, Adrian Woodhouse, said, ‘The photographs from his session in Belgrade Road endowed Crisp with the fabulous beauty of a Garbo or Joan Crawford.’ Towards the end of the war, Crisp was admired by the young sailor George Melly, who went on to become a popular jazz singer and critic. In 1977 Melly recalled Crisp in his bestselling autobiography Rum, Bum and Concertina:

Being in Chelsea he was unshaven and rather grubby, the nail varnish on both finger and toe nails, peeping through gilt sandals, cracked and flaked, his mascara in need of attention, his lipstick of renewal. He had, however, a wistful, frail beauty and a wicked wit. His hair was henna red […] unseen then on ostensibly male heads. I thought him extraordinary and suspected, rightly so as it turned out, that he must have the courage of a lioness to walk the streets of London.

In April 1940 the flamboyant Crisp, ‘blind’ with mascara and ‘dumb’ with lipstick, was rejected by the Army’s medical board on the grounds that he was ‘suffering from sexual perversion’ and therefore unfit for active service. In reality, Crisp had toned down his appearance, but this was in vain, for the medical examiners had the measure of him and Crisp made no secret of the fact that he was a homosexual. Eventually a young man appeared and informed him that he would never be wanted for active service, and thrust a small piece of paper at him. Crisp said:

This described me as being incapable of being graded in grades A, B, etc. because I suffered from sexual perversion. When the story of my disgrace became one of the contemporary fables of Chelsea, a certain Miss Marshall said, ‘I don’t much care for the expression “suffering from”. Shouldn’t it be “glorying in”?’

So the Army did not embrace all the homosexuals who wanted to do their ‘bit’ for King and country. However, Crisp had already been a soldier, of sorts, with London his battlefield. He later told George Melly: ‘When Mr Hitler started the war, I wrote to Paris and got them to send me enough henna to last through it, however long it took. That was my war effort.’

Throughout the 1930s Crisp, who had no wish to hide his effeminacy, mascara or hennaed hair, had been subjected to vitriolic homophobic verbal abuse and physical attacks. So, with the outbreak of war, he was more than equipped to face risks and dangers. However, when the London Blitz started in September 1940, Crisp discovered that everyone began to talk to each other, ‘even to me’.

And in the blackout there was sex, lots of it, in shop doorways, train carriages, air-raid shelters and other secret places. For Crisp, the London Blitz was a ‘feast of love’ laid on by ‘St Adolf ’. Joshua Levine described him in The Secret History of the Blitz (2015) emerging, one evening, from Leicester Square tube station: ‘Crisp found himself disoriented in the darkness. Asking a [male] passer-by what street he was on, he received a kiss on the lips – followed by the answer.’

In 1940 Crisp moved into the bed-sitting room at 129 Beaufort Street in Chelsea which would be his home for 40 years. In 1942 he left his job as an engineer’s tracer and became a model in life classes in London and the Home Counties. He continued to pose for artists for 30 years. Like so many who discovered sexual freedom on the streets of London in wartime, Crisp enjoyed the war, especially when America entered the conflict in December, 1941. He was overjoyed when they began to ‘flood’ Britain with handsome GIs. He was impressed and seduced by their openness, kindness and affection, and this inspired his love of all things American. In 1981 he left Britain and settled in New York. In his autobiography The Naked Civil Servant (1968) Crisp described the arrival of the GIs as an exciting and sexually arousing event: ‘Labelled “with love from Uncle Sam” and packaged in uniforms so tight that in them their owners could fight for nothing but their honour, these “bundles for Britain” leaned against the lamp-posts of Shaftesbury Avenue or lolled on the steps of thin-lipped statues of dead English statesmen.’

For Crisp, the most unexpected wartime development was an enlightened attitude he encountered at Bow Street Police Court in November 1944. He had been falsely arrested by two lying policemen ‘disguised as human beings’ in Coventry Street, and charged with soliciting. However, the magistrate grew tired of the parade of Crisp’s character witnesses singing his praises and decided that the evidence against him was insufficient to convict him. The case was dismissed. After the war, the persecution of homosexuals began to increase, and Crisp acknowledged that he had become ‘a loathsome reminder of the unfairness of fate. I was still living while the young, brave and the beautiful were dead.’

Fighting Proud: The Untold Story of the Gay Men Who Served in Two World Wars is out now and available here. Find out more about the author Stephen Bourne via his website.