Xu Zhen is a pivotal figure in the Chinese art scene, straddling the divide between the older generation of artists that emerged in the early 1990s and the younger generation, many of whom were born after 1980. Born in 1977, Xu Zhen is still quite young himself, buthe has been showing so long and with such potency that he is already considered a leader and a mentor for younger artists. Bypassing art school, he began his career in Shanghai with a series of provocative videos. Today, he is known as an artist who has worked in practically every medium—painting, photography, video, sculpture, and installation.

In 2009, at the age of 32, Xu Zhen relinquished his identity as an artist and proclaimed himself CEO of an art-making company, humorously titled MadeIn, after the commercial labeling “Made in China.” With already a decade of art exhibitions under his belt, he knew that a Chinese artist could barely escape the pigeonholing of foreign curators and the expectations that his work should bear the markings of Chinese culture. Yet from the start, he seemed to be trying to defeat this categorization, and now with MadeIn, he could certainly stand such stereotypes on their head. 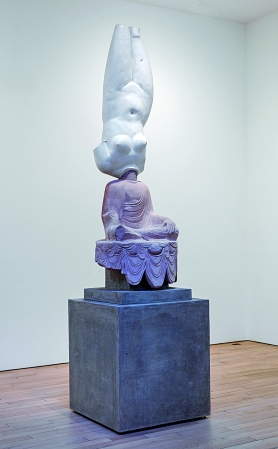 Which is what MadeIn literally did at its most recent exhibitions. Visitors to their shows at the Ullens Center in Beijing in 2014 and the Long Museum a year later encountered mammoth sculptures, amalgamations of Greek and Chinese antiquities, contorted and combined in ways that made a joke of the whole concept of East meets West. A replica of Winged Victory rested upside down atop a headless bodhisattva, the two statues joined at the neck. In another, a line of Greek warriors were reconfigured as a multiarmed god. These were not just inspired revisions of classical icons, East and West, but more of an Animal House game, playing on the expectations of viewers to find something from either culture in works by artists who aspire to go “global.” Yes, at biennials and art fairs throughout the world, there were dozens of artists, especially Chinese, who had built careers by merging cultural artifacts. But when MadeIn did the same thing, it was more as a critique of this practice, rather than an homage, a satire sometimes lost on those first encountering the works.

“I have a complex relationship with Chinese traditional culture,” Xu Zhen told me once at an interview just before the opening of the MadeIn retrospective at the Ullens Centre for Contemporary Art in Beijing. “It’s like your parents—you love them but there must be some conflicts in the real life. I think these statues are able to carry many complex emotional aspects.”

There are many occasions when Xu Zhen has eschewed references to Chinese culture entirely or mixed up symbols so seamlessly that the only reaction could be total confusion. At one of MadeIn’s first exhibitions, the company produced an entire survey of “art from the Middle East,” combining aesthetic strategies from conceptual art practices with just enough stereotypes of the war-torn, Islamic-dominated region to evoke a Middle Eastern identity. There were mosques made of Styrofoam and Charlie Hebdo political cartoons woven into tapestries. There were sculptures made of barbed wire and a field of broken bricks set on an invisible waterbed, so the ground seemed to move like a silent earthquake. When these works were shown at James Cohan Gallery in New York in 2009—with the title Lonely Miracle: Art from the Middle East—most visitors had no choice but to assume these were products of a collective of Arab artists, which was exactly the point. In this globally driven art world, it is easy to fake ethnicity. All it takes is a bit of irony and just enough cultural references to add locality to the mix.

“Anyone can be a Chinese artist,” Xu Zhen once told me. “An American artist can be Zhang Xiaogang,” referring to the Chinese art star known for his somber depictions of one-child families and Cultural Revolution devotees. Knowing full well that Western viewers were seeking souvenirs of their trips to the Far East and evidence of their global sophistication in their art acquisitions, Xu Zhen chose to play with these expectations rather than simply feed the market. And if anyone can be Chinese, anyone can be Xu Zhen, which he has proven by allowing MadeIn to be the producers of his artworks.

Barbara Pollack is an award-winning journalist, art critic, and curator who is one of the world’s leading authorities on contemporary Chinese art. Pollack’s writing has appeared in Vanity Fair, The New York Times, the Washington Post, the Village Voice, Departures, Artnews, Art and Auction and Art in America, among many others. She has also written several ground-breaking monographs on young Chinese artists, including the first published artist profile of Ai Weiwei for Artnews in 2005. She lectures regularly across the USA and Asia, and was the key note speaker at 2018’s Art Basel Hong Kong.

BRAND NEW ART FROM CHINA: A GENERATION ON THE RISE is available in the UK now and can be bought here.