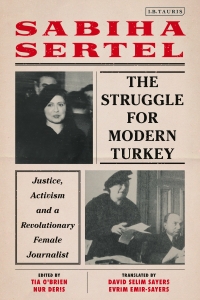 “Papers are accused of saying things they didn’t. Their articles are misrepresented, distorted and denounced… These are the tactics of the status quo today, designed to confuse the common people…”
– Sabiha Sertel

“Fake news” smear attacks are nothing new.  It’s an old game aimed at bullying journalists into submission.  My family knows it well.

Dec. 4th, 1945 is the date that altered my family’s fate and the future of democracy in modern Turkey. It took just one hour on an unseasonably warm winter morning in Istanbul.

Picture this: a brutal mob of thousands, orchestrated by the authoritarian regime and armed with pick axes and sledgehammers, sets out to destroy the country’s second-largest newspaper Tan and permanently silence its powerful editors, Zekeriya and Sabiha Sertel. It was a desperate move. The Sertels, unrelenting advocates of democracy and a free press, were launching a full-throttle push for multi-party rule, throwing the weight of their popularity and publishing house behind a head-on confrontation with the regime.

The Sertels were my grandparents, and like them, I’m a journalist—an American journalist. I find it remarkable that 74 years after the Tan riot, it’s still described by many as the darkest hour in the fight for a free press in Turkey. It’s a disturbing distinction given that the mainstream news media now is firmly under government control and, according to the Committee to Protect Journalists, has locked up more journalists than any other nation for three years running, dropping to second place only in 2019.

Equally remarkable is the story revealed in my grandmother’s memoir, only recently translated into English. She was modern Turkey’s first professional female journalist, a passionate socialist who, along with her husband, fought relentlessly for a full democracy.

In her autobiography, Sabiha vividly describes the infamous destruction of Tan. Her words are particularly chilling because of the parallels with not just 21st century Turkey, but events throughout the world: the rise of strongman rule and the insidious repression of the news media in Western democracies, including the United States and United Kingdom.

Seven decades after the Tan riot, the Sertels remain role models for a hardy breed of loyal opposition journalists under siege in Turkey today. They are defiant and resilient and many of them are living out the Sertels’ story.  To keep informing citizens, the Sertels risked censorship, firing, imprisonment, and ultimately were forced into exile.

On Dec. 3rd, the day before Tan’s destruction, Sabiha published an article that resonates eerily in our era of “fake news.”

“Opposition newspapers show great civil courage in speaking the truth,” she writes, going on to describe a brazen campaign to distort and discredit critical journalists. “This is the clamour of the status quo, raised to drown out the people’s opposition.”

That same day, a pro-government daily published a front-page editorial with the headline, “Rise up, O Patriots!” It was the rallying cry for Tan rioters.

On Dec. 4th, Sabiha fired back with what would become her final article. It was entitled “Don’t Fear The Newspapers, Fear Public Opinion.”

” … Publications only have an impact if they reflect the will of the people. If they oppose the ideas and interests of the people, they simply fade away. All the noise made by pro-government journalists to drown out opposition papers won’t be enough to fool or confuse the people. Don’t fear newspapers. Fear the people.”

In her memoir, Sabiha describes the events that morning. At 9:30am, an eyewitness— a news editor— watches as a student crowd quickly swells into an angry mob of thousands, winding through cobblestone streets chanting, “Down with communists! Down with the Sertels!” until they arrive at the publishing house.

“Wave after wave of youths demolished Tan’s windows and doors with stones and iron bars,” he recounts. “On the first floor of Tan stood one of the largest rotary printing presses in Turkey at the time. They started attacking that press with the pieces of iron they found in the room and completely destroyed it, even smashing the parts they’d broken off.”

Only one part of the government’s plan failed: the public lynching of the Sertels, who’d gone into hiding. After the riot, they were locked up, put on trial and finally acquitted. Once home, they found themselves under police surveillance, blacklisted and ultimately were forced to flee their country.

Over and over in her memoir, my grandmother’s prescient words trigger alarm bells.

It is 1937. The Sertels warn Turks early on about the growing threat of Hitler and fascism. Sabiha recounts her interview that year with the French foreign minister and his response when questioned about Hitler and an impending war.

… The French Foreign Minister was serene. He believed that war could be avoided if concessions were made to Germany.

….. When the German armies finally attacked France, I couldn’t stop thinking about that minister. Like an ostrich, he’d dug his head in the sand but left his feet outside. Then one day, the fascist armies pulled that ostrich out by its legs and plucked its feathers.

I’m left wondering how many ostriches will be plucked bare as nationalism rises in Europe and the U.S. and authoritarian regimes take hold.

It was 1950 when the Sertels fled Turkey in fear for their lives. Even after losing everything, my grandparents still refused to remain silent. The U.S. denied them asylum so they landed behind the Iron Curtain at the height of the Cold War, where they struck a highly unusual agreement with the Soviets. They founded an underground radio station and secretly beamed back uncensored news to Turks.

When that agreement unraveled, they moved again, this time to Baku, where the Soviets stripped them of their Turkish passports and barred them from leaving. Still they kept writing. Their memoirs chronicle an unflagging fight for a Turkish democracy with civil rights and a free press.

Sabiha died in exile shortly after completing her autobiography, which she titled Like a Novel. When told she was dying from cancer, she replied, “What a pity, I have so much more to write.”

The manuscript was smuggled out of the Soviet Union in a suitcase filled with dirty laundry. It was controversial reading since Sabiha was banished, smeared as a dangerous, outlawed communist and a threat to the Republic.

In my own home in suburban Washington, D.C., my grandmother was a mystery. I’d met her only once when I was three. I couldn’t read or speak Turkish so I had no idea what was in her book until I decided to translate it in my search for the truth about the elusive Sabiha.

What I discovered was a call to action for journalists in Turkey and in countries where we take our right for a free press for granted. My grandparents never abandoned their belief that the best hope for a democracy was an informed electorate, even after losing their publishing house, their wealth, their country and family.

My grandfather left no doubt about their conviction when he wrote me months after Sabiha’s death. He asked if I’d read their autobiographies. “We worked and we fought for our ideal of democracy and for our people. That is our consolation.”

In the digital age, there’s no need to orchestrate mobs of thousands to physically demolish a powerful opposition newspaper, broadcaster or website. All it takes is a flick of a switch to shut off power, followed by a takeover to silence them. In Turkey, this is a repeating scenario.

But Sabiha’s memoir proves that defiant journalists speaking the truth are not easily silenced or forgotten. I was stunned when both the English and republished Turkish editions unexpectedly sold out. Why does her saga still resonate with readers decades after her death?

Flashback. On the 65th anniversary of Tan’s destruction, I’m dining at a Turkish restaurant tucked away in a Philadelphia strip mall. Members of the Philadelphia Turkish Society are at the next table. Somehow word circulates that I’m the Sertels’ granddaughter. A retired accountant in his 70s pulls up a chair. “I was a student in the 50s and 60s and I remember the Sertels,” he tells me. “If you even said the name ‘Zekeriya,’ you were in trouble.” Later as I get up to leave, he stops me. “Sertel. I cannot believe that I am sitting across from Sabiha and Zekeriya’s granddaughter. This is a very important legacy.  It is important that you preserve it.”

My grandparents’ legacy speaks across generations. They understood the danger of history’s repeating cycles and foreshadowed the consequences. Sabiha penned her memoir from a cramped, dingy apartment in Baku, a stark contrast to the Sertels’ legendary villa overlooking the Sea of Marmara. After 18 years in exile, there was no hope in sight of returning to home, to Turkey. Yet the story she wrote is filled with irrepressible hope for a better country and world, and a potent punch line: never give up.

Tia O’Brien is a San Francisco-based journalist. She co-edited, with Nur Deris, the English translation of Sabiha Sertel’s memoir The Struggle of Modern Turkey: Justice, Activism and a Revolutionary Female Journalist, published by I.B. Tauris. Find exclusive extras on Sabiha’s life and memoirs at www.struggleformodernturkey.com and order a copy of the book here.