For the last few weeks, billions of locusts have been swarming in east Africa, putting crops and pastureland at risk in a region that has already been tackling droughts and floods. According to the FAO, Kenya is facing its biggest infestation in 70 years, while Ethiopia and Somalia face its largest for 25. How can these enormous locust plagues be controlled?

Colin Everard spent a decade collecting extensive experience of locust swarms in the Horn of Africa. Read on for an extract of his book Desert Locust Plagues: Controlling the Ancient Scourge, where he shows exactly why locust swarms are so dangerous and hard to control – and how their threat could be reduced in the future.

(On the coast of Somaliland, a desert locust control specialist is talking)

A huge swarm has arrived from across the Red Sea. By traversing with the jeep, I reckon it covered about a hundred square miles. The adults were yellow, which means they were mature. The ground was soft, so the females could easily lay their egg pods; there are 50 to 150 eggs in each pod, so the degree of multiplication is enormous. The adults have flown away. They fly at twelve miles per hour in still air; but they may have a tail wind, so they might cover twenty or thirty miles each hour. In order to maintain itself the locust must eat at least half its own weight in food every day. One can’t know for sure, but typically that swarm might weigh about thirty five thousand tons. Imagine!

The swarm has been breeding; so now the eggs are already beginning to hatch. The little locust nymphs will soon start hopping around to look for some edible vegetation. We call the nymphs ‘hoppers’. Before they fly away as pink, immature locusts, the hoppers start forming bands of increasing size; eventually whole armies are marching across the terrain, devouring everything along the way. After about a month, the hoppers develop wings. Then one day, as though their leader has blown a horn, the young locusts form a swarm – and they fly on their devouring, utterly destructive way.

The way we try and control locusts is to reduce the size of the next generation as much as possible. If we do a good job the ‘escape’ is pretty thin. Then predator birds and natural causes do the rest. The way we reduce the hopper population is by spreading poison bran ahead of the marching hoppers. The hoppers eat the bran – then they die of stomach poisoning.

The swarms which invaded the Horn of Africa usually started their flight in the Arabian Peninsula. During their traverse of the Horn area, provided the twice-yearly rains had softened the sandy soil, the mature locusts breed, depositing the egg pods in the sand. The pink young locusts quickly mature and their colour changes to a solid yellow; now they are ready to breed.

Anyone who has watched and heard a massive, dense swarm in flight will retain a life-long memory. As one looks up to the heavens, one sees countless locusts passing overhead, the silvery colour of their wings caught in the rays of the sun. As one’s ears pick up the low hum of the millions of flying insects, one stands there as though mesmerised. Above all, one develops a feeling of utter helplessness.

South-eastern Ethiopia, 1953. A small part of a swarm of desert locusts.

Now we have to learn of the current problems which prevent us from achieving complete desert locust control. A major general problem which impedes practical progress in controlling desert locusts is the fact that many of the locust-affected countries are so-called Third World countries. This fact has a direct bearing on the capability of countries to cope with desert locust plagues.

The way in which challenges faced by Third World countries is managed often strongly differs from the course of action which would probably be adopted by developed countries in a similar situation. Whereas a developed country has at its disposal a solid, experienced infrastructure, this is frequently not the case in a developing country. And whereas a developed country has ready access to funding, too often a Third World country finds itself in a parlous financial state, especially when it comes to necessary foreign exchange (hard currency) to purchase equipment or services.

To offer a specific example, the capital cost of buying aerial spraying aircraft would certainly be a relatively high financial component of a hard-pressed budget, as would be the cost of the maintenance of the aircraft; in addition, the cost of the salaries of the crew members would need to be financed.

In the context of combating desert locust plagues, every affected country accepts its responsibility to put in place the human and physical infrastructure needed. However, within a country concerned, such a project has to compete for funding with, for example, measures to alleviate poverty, improved education, the provision of medical facilities, and so forth.

Certainly, the international community has a very important role to play in supporting countries’ efforts to control desert locust plagues. Without essential international support, an unchecked desert locust plague will inevitably result in dire consequences for the country concerned. These consequences will involve destruction of crops and grazing, leading to widespread hunger and starvation. 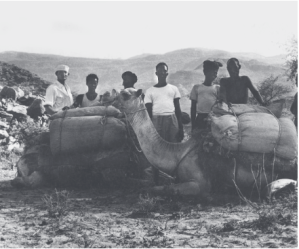 Mankind, currently at war with itself, is plagued with conflict, wars, terrorism of one sort or another, civil strife and suspicion at every turn. Unfortunately, in the context of controlling desert locusts, there are important areas in the Horn of Africa which are simply off limits.

For instance, I have related that the Hemistio (Ximistiyo) Depression in north-eastern Somalia sometimes harbours dense concentrations of desert locust swarms. The swarms would be an ideal target for aerial spraying. But who would venture there today? The area is infested with pirates; they revel in kidnapping and physical violence.

In the context of aerial spraying of desert locust swarms, it is a sad reflection of our troubled world that if, for instance, it is decided to transfer a locust spraying aircraft from one country to another, apart from delays encountered in gaining clearance from the (often suspicious) recipient country, it may well be either impossible to obtain insurance cover for the aircraft, or the insurance cost involved is prohibitively high due to the perceived high risk element.

Meanwhile, ravenous locust swarms, which may be covering up to 150 miles per day, are approaching cultivated areas. But the option of using spraying aircraft is nullified due to the insurance cost and bureaucratic clearance hurdles.

If we take into account what I have explained in relation to many locust-affected countries, unless the far-reaching political problems of our world can be resolved, then the achievement of complete desert locust control will remain an elusive goal. Technological progress on its own will never be enough to solve the terribly devastating problem of desert locust plagues. We need to make corresponding advances in our civilization.