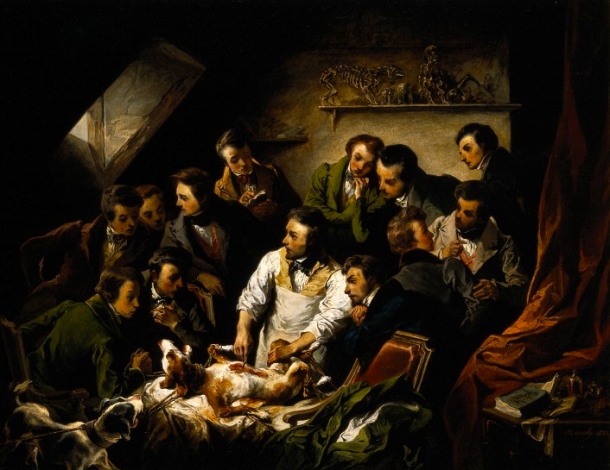 In 1664, Robert Hooke—a pioneering member of the Royal Society and lead scientific thinker of his day—decided to investigate the mechanisms involved in breathing. In his laboratory, he strapped a stray dog to his table. Then, taking his scalpel, he proceeded to slice the terrified animal’s chest off so he could peer inside the thoracic cavity.

What Hooke hadn’t realised before he began his experiment was that lungs were not muscles, and that by removing the animal’s chest, he had removed the dog’s ability to breathe on its own. To keep the animal alive, Hooke pushed a hollow cane down the dog’s throat and into its windpipe. He then pumped air into the animal’s lungs with a bellow for over an hour, carefully studying the way in which the organs expanded and contracted with each artificial breath. All-the-while, the dog stared at him in horror, unable to whimper or cry out in agony.

On 10 November 1664, Hooke wrote to Robert Boyle about his experiment. In his letter, he described how he ‘opened the thorax, and cut off all the ribs’ of the dog, and ‘handled…all the other parts of its body, as I pleased’. But despite these rather horrific details, we see through Hooke’s words a man deeply moved by the suffering he had caused, for he ends, ‘I shall hardly be induced to make any further trials of this kind, because of the torture of this creature’.[1]

The term ‘vivisection’, which refers to the act of dissecting a live animal or human being, was coined in 1709. Yet, it celebrated a long tradition reaching back thousands of years. One of the earliest recorded accounts dates from 500 B.C., when Alcmaeon of Croton severed the optic nerves of live animals in order to understand how it affected their vision. Indeed, William Harvey’s discovery of the circulation of blood around the heart in 1628 was made possible by his use of vivisection; and it is likely that it was Harvey’s work which prompted Hooke to conduct his own experiments several decades later.

Hooke may have abstained from further vivisections after seeing the anguish he caused in the dog, but others were not necessarily willing to abandon these types of experiments simply because animals suffered as a result.[2]

In particular, surgeons-in-training found vivisection a helpful tool for learning how to operate quickly and confidently. In a pre-anesthetic era, the slightest hesitation could cause a patient to die from shock and blood loss. Working on the bodies of live animals allowed the inexperienced surgeon to operate at his own pace, learning from his mistakes as he went without the fear of accidentally killing another human being. In early modern England, where bear-baiting and cock-fighting were national pastimes like football or rugby are today, it was perfectly acceptable to allow for such extreme suffering in animals under these conditions.

That is not to say, however, that there were no objections to vivisection during this period. Most protests, though, were not centered on animal cruelty, but rather the argument that animals and humans differed too much anatomically for vivisection to be useful.  Still, there were those who spoke up in defense of animals.

In 1718, the poet Alexander Pope—a renowned dog lover—condemned the experiments of his neighbour, Reverend Stephen Hales, who often cut open the abdomens of stray dogs while investigating the rise and fall of blood pressure. While conversing with his friend, Joseph Spence, Pope reportedly said of Hale:

He commits most of these barbarities with the thought of its being of use to man. But how do we know that we have a right to kill creatures that we are so little above as dogs, for our curiosity, or even for some use to us? [3]

Similarly, Samuel Johnson—essayist and author of A Dictionary of the English Language—spoke out against vivisection in the Idler (August, 1758). He condemned the ‘race of wretches, whose lives are only carried by varieties of cruelty’ and whose ‘favourite amusement is to nail dogs to tables and open them alive’.

The image of a live dog being nailed to a table may seem an exaggeration on the part of Johnson to elicit feelings of disgust and horror. Sadly, this is not the case, as evidenced by the testimony of Mr Richard Martin, who moved to bring a bill for the repression of bear-baiting and other forms of cruelty to animals, to the Irish House of Commons in 1825:

There was a Frenchman by the name of Magendie… [who] at one of his anatomical theatres, exhibited a series of experiments so atrocious as almost to shock belief.  This M. Magendie got a lady’s greyhound…nailed its front, and then its hind paws with the bluntest spikes that he could find, giving as reason that the poor beast, in its agony, might tear away from the spikes if they were at all sharp or cutting.  He then doubled up its long ears, and nailed them down with similar spikes…He then made a gash down the middle of the face, and proceeded to dissect all the nerves on one side of it…. After he had finished these operations, this surgical butcher then turned to the spectators, and said: `I have now finished my operations on one side of this dog’s head, and I shall reserve the other side till to-morrow.  If the servant takes care of him for the night, I am of the opinion that I shall be able to continue my operations upon him to-morrow with as much satisfaction to us all as I have done to-day; but if not, ALTHOUGH HE MAY HAVE LOST THE VIVACITY HE HAS SHOWN TO-DAY, I shall have the opportunity of cutting him up alive, and showing you the motion of the heart.[4]

Stories, such as these, are very disturbing, and illustrate that some medical men took pleasure in such sadistic practices. Nonetheless, as illustrated in Hooke’s letter to Boyle, it would be wrong to assume that all those who performed vivisections during this period were calculating and heartless.

Most importantly, however, we must remember that many ground-breaking discoveries were made as a result of vivisections, and it is to these animals we owe a huge debt for advancements made in medical science during the early modern period. ■

Top image shows a physiological demonstration with vivisection of a dog. (Oil painting by Emile-Edouard Mouchy, 1832. From the Wellcome Library, London)

This article was initially posted on Lindsey Fitzharris’ website, The Chirurgeon’s Apprentice, which dedicates itself to the study of early modern surgeons, and all the blood and gore that comes with it.

Lindsey Fitzharris is a medical historian. She recently completed her doctorate at Oxford University, where she specialised in the history of seventeenth-century alchemical medicine. She is currently a Wellcome Trust Postdoctoral Research Fellow at Queen Mary, University of London. Her work focuses on the rise of the surgeon in Restoration London (1660-1700); however, her interests in the history of surgery reach much further.

Torturing the Dead: The Prevention of Premature Burial and Dissection

2. Hooke did not perform any further vivisections per se; however, he did continue to use animals in his experiments.

4. Qtd from Albert Leffingwell, An Ethical Problem, or, Sidelights upon Scientific Experimentation on Man and Animals (London, 1916).