You know his paintings, but what about his prints?

Edvard Munch (1863-1944) is renowned for his preoccupation with universal emotions such as isolation, melancholy, and anxiety. Given this dark subject matter, it seems ironic that in the UK two major Munch retrospectives are taking place over the summer months. Edvard Munch: The Modern Eye at the Tate Modern runs from 28 June – 14 October, whilst Edvard Munch: Graphic Works from The Gunderson Collection runs from 7 April – 23 September at the Scottish National Gallery of Modern Art in Edinburgh.

Luckily for us at I.B.Tauris, we are very much part of this reassesment of Munch – having published Edvard Munch Prints in 2009, we also have Edvard Munch: The Complete Graphic Works out later in the month. The latter of which being the most authoritative study of Munch’s graphic works ever published.

Although not what he’s famed for, Edvard Munch’s graphic work is an integral part of his artistic oeuvre and should not be considered in isolation from his paintings, sketches and drawings. After the sensation of his 1892 Berlin exhibition, Munch’s graphic work was itself an important influence on twentieth-century art. Munch was inspired by the cycles of etchings by the German artist Max Klinger to create graphic versions of his own innovative psychological imagery, working first in a style related to Symbolism and Art Nouveau to produce both etchings and lithographs. In 1896 in Paris, influenced by Félix Vallotton and Paul Gauguin, he made his first woodcuts. Woodcut provided a relatively simple technique that was ideally suited to Munch’s imagery, in which mood, and therefore colour too, were essential.

Prints became an important part of Munch’s output and they were exhibited thorughout Europe in his lifetime. Out of a total of 748 prints, the majority are etchings and lithographs, but Munch’s enduring influece came through colour woodcuts such as The Kiss, Melancholy and The Girls on the Bridge. These powerful and important works inspired a new fascination for woodcut among German Expressionist artists, and are among the finest prints of the twentieth century.

Below we have created a small gallery that features some of our favourite examples; and because we’re contrary, we haven’t included The Scream. 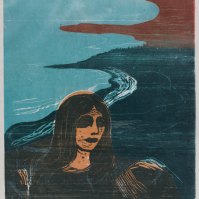 Woman’s Head against the Shore, 1899, woodcut 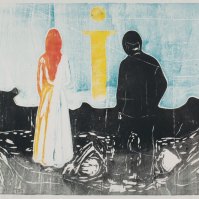 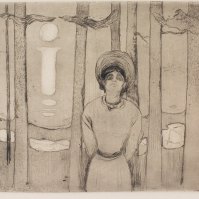 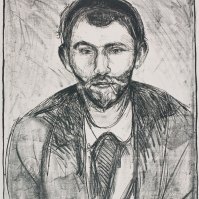 The Girls on the Bridge, 1918, woodcut and lithograph 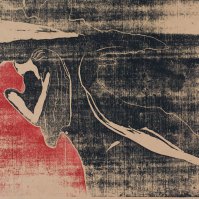 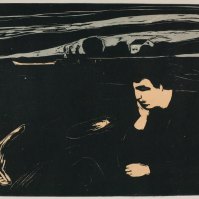 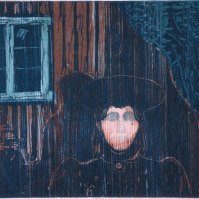 Death in the Sickroom. 1896, lithograph

Self-portrait with Bottle of Wine, 1930, lithograph

All the images in this post are taken from Edvard Munch: The Complete Graphic Works, which collects all of the 748 registered prints Edvard Munch made during his life. An online preview from the book is available to read online.