Mark Atherton explores The Hobbit and its relationship with the much over-looked trend of literary myth during the Great War. 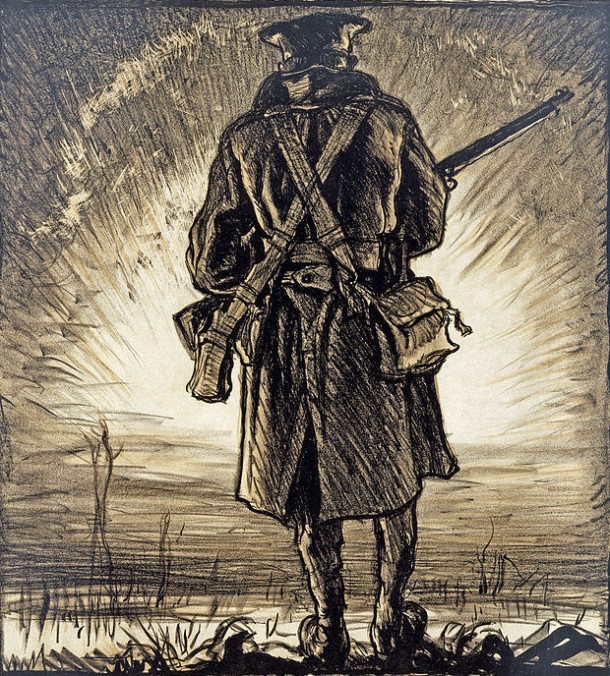 In 1917 the young poet Robert Graves, who – like J. R. R. Tolkien – had been hospitalised at the Battle of the Somme in 1916, published his early volume of verse Fairies and Fusiliers. The title is revealing, for it shows clearly – and perhaps surprisingly – that the ‘fairy theme’ was alive and well in the later stages of the First World War in the writings of one of the most talented poets of that generation.

Though many of the poems are direct realist pieces, the following touch on folklore or myth in various ways: ‘Babylon’, ‘The Cruel Moon’, ‘Finland’, ‘Faun’, ‘I’d love to be a Fairy’s child’, ‘Love and Black Magic’, and ‘Cherry-Time’ with its repeated refrain ‘And you’ll be fairies soon’. Not all of these poems have survived into later editions of Graves’s Collected Poems, and copies of some are difficult to locate, but the evidence of the 1917 volume is clear: this was a literary fashion in which Graves participated, and the alliterating title shows a startling juxtaposition of the imagery of the fairy with that of modern warfare.

Tolkien disagreed strongly with the assertion that fairy-tales, mythology and folklore belong only to childhood. Myth, Tolkien felt, was much more universal, much more important and significant than this, and claimed that a liking for fairy-stories was not at all characteristic of his own ‘nursery days’. Some interest in fairy-stories certainly developed as he learned to read for himself in the years before he attended school (when he was taught at home by his mother) but he also liked and even preferred other things: history, astronomy, botany, grammar and etymology.

As for poetry, this was something he usually skipped if it came in tales (as do, ironically, some present-day readers of Tolkien’s Lord of the Rings) but he acquired a liking for poems at school when he came to study them in other languages such as Latin and Greek. He goes on to assert that he developed a liking for this kind of story only after he grew up, and that it was kindled into flame by his experiences in the war. The claim needs to be tested further: how was Tolkien’s taste for fairy-stories ‘quickened to full life by war’?

Tolkien’s own planned book in the period of the Great War, a collection of poems with the title The Trumpets of Faerie, had been submitted for publication, but it was fairly quickly rejected by the publishers Sidgwick & Jackson. Tolkien and his fellow TCBS-ite (Tea Club, Barrovian Society)* Geoffrey Bache Smith had however achieved the moderate success of having poems published in Oxford Poetry, their names appearing in the list of contents alongside modernist poets destined for greater poetic fame in the future. Tolkien’s poem was ‘Goblin Feet’, a poem about the open road, and little sprite-like creatures disappearing beyond the poet speaker’s reach; it is very much in the same mode as a poem about Tinfang Warble that he also wrote in this period.

Less folkloristic is Smith’s contribution, a short piece of historical reflection on the old roads built by the Romans. But since the TCBS claimed to be antithetical to the subject matter of modernism, Tolkien and Smith were not happy with the reviews of the volume, which tended to favour the more experimental or modernist poets in the anthology, such as the editor T.W. Earp. Tragically the young writer H.R. Freston, one of the poets in the anthology whom they did admire, was killed in action, and Smith himself was to succumb to shrapnel wounds later in 1916. Events seemed to be weighted against their project.

The value of the fantastical was under threat. It is the contention of some literary critics that the Great War said ‘goodbye to all that’, and indeed Robert Graves, the originator of the phrase, produced the following couplet in one of his poems of the period:

Wisdom made him old and wary
Banishing the Lords of Faery

It is easy to see why he would write this, for it certainly seemed as if the modern world was driving out the old. One of Rudyard Kipling’s stories in Rewards and Fairies pictures the departure of the fairies overseas as taking place at the time of the Reformation, the time when the old beliefs were done away with; since the story was published in 1910, it was perhaps symptomatic of what was to come. Graves’s collection Fairies and Fusiliers marks the onset of the new realism, though as we have seen a number of the poems (such as ‘I’d love to be a Fairy’s child’, ‘Love and Black Magic’, ‘Cherry-Time’) still hark back to the Edwardian and Victorian fairy themes that were in danger of dying, like Tinker Bell on the Edwardian stage, through lack of belief. But there may be reasons to rethink this rather commonplace conclusion. Both the readers (i.e. the young men who fought in the war) and the writers (i.e. the intellectuals who wrote about their wartime experiences) were intensely interested in myth, of various kinds.

Among the writings that Paul Fussell in his The Great War and Modern Memory emphasises is allegory, especially John Bunyan’s Pilgrims’ Progress. But there was also the romance quest, exactly the kind of story that Tolkien was writing in his hospital bed in the winter of 1916–17. The example Fussell cites is William Morris’s Well at the World’s End (1896), which is now regarded as a classic of its kind. The story of a young man’s trial and testing, his first love and loss, and his second love, and his quest to find the fabled well on the farthest eastern shore of an unknown country, all takes place in a partly familiar English medieval world. According to Fussell, who rather surprisingly claims not to particularly appreciate The Well at the World’s End himself, ‘there was hardly a literate man who fought between 1914 and 1918 who hadn’t read it and been powerfully excited by it in his youth … for a generation to whom the terms like heroism and decency and nobility conveyed meanings that were entirely secure, it was a heady read and an unforgettable source of images’.

Fussell cites a number of writers such as C.S. Lewis, Hugh Quigley and Siegfried Sassoon; all these allude to it or couch their wartime experience in terms of images and episodes drawn from Morris’s great work. One such moment is the valley of the Dry Tree at the centre of a kind of dismal valley or amphitheatre, with its poison pool and dead and mummified pilgrims scattered around it. One example cited by Fussell, for instance, is Hugh Quigley’s Passchendaele and the Somme: A Diary of 1917 where he compares the war-torn landscape and dead soldiers to the strange image of the Dry Tree in Morris’s novel. Tolkien himself recalls this kind of imagery in the dry tree of Gondor, and especially in the Dead Marshes through which Frodo Baggins and Sam Gamgee pass on their journey to Mordor in The Return of the King.

Though the Great War did hasten the departure from the medievalist themes in poetry and in art that the Victorians had loved, it is important not to overstate this tendency, for there are many qualifications to be made. It should be noted that both before and after the war there were modernist writers who remained fascinated by myth as a literary mode. Many employed the imagery of medieval poetry in their own writings; these include poets such as Edward Thomas (who wrote versions of Celtic and Norse tales), Ezra Pound (who was fascinated like Tolkien with the imagery of the Old English poem ‘The Seafarer’) and T.S. Eliot (who was widely read in medieval Arthurian literature and in Frazer’s Golden Bough). As Thomas Honegger has pointed out, Eliot praised ‘mythical method’ as a ‘simple way of controlling, ordering, of giving a shape and a significance to the immense panorama of futility and anarchy which is contemporary history.’ ■

* ‘Tea Club, Barrovian Society’, was a kind of literary club, a circle of like-minded school friends at King Edward’s School in Birmingham, who met through the committee of the school library and organised illicit tea-parties at the tea shop in Barrow’s stores (hence the name Barrovian Society), where they read and discussed their literary work together.

Mark Atherton is Lecturer in English Literature in English Language and Literature at Regent’s Park College, Oxford and the author of There and Back Again: J.R.R. Tolkien and the Origins of The Hobbit, of which the article above is an edited extract.