We caught up with Anthony Downey to talk about Uncommon Grounds, art and media practices in North Africa and the Middle East.

In 2012 we announced our partnership with London-based online publishing forum Ibraaz, producing volumes on visual culture in North Africa and the Middle East.

September saw the culmination of lots of hard work finally bear fruit as Uncommon Grounds: New Media and Critical Practices in the Middle East and North Africa, the first volume in this project, was released

Bringing together internationally renowned and emerging academics, writers, artists, curators, activists and filmmakers, Uncommon Grounds critically reflects on the ways in which visual culture has developed and appropriated new media in the Middle East and North Africa.

We caught up with Anthony Downey, Editor in Chief at Ibraaz, to discuss the origins of Ibraaz, the forum’s mission and what we can expect in future volumes.

How and when was Ibraaz founded?

Ibraaz begun in a discussion between Kamel Lazaar, his daughter Lina Lazaar, and myself as far back as 2009. The planning stage, however, took a further 2 years before we launched as part of the 54th Venice Venice Biennial in June, 2011. It was and continues to be an initiative of the Kamel Lazaar Foundation.

Would you say Ibraaz has a particular mission?

Yes, it was always very clear from the outset and from conversation between myself and Mr Lazaar that Ibraaz should focus on one thing: the production of critical cultural knowledge concerning north Africa and the Middle East. This is not to say that this was not already been done within and beyond the region, but we had a very clear sense that it needed long-term, sustainable support. It was with this in mind that the Kamel Lazaar Foundation committed to not only initiating, but supporting Ibraaz as a research and publishing forum for the foreseeable future with that one key goal in mind.

Our broader editorial policy relates to the formal and conceptual issues informing art as a practice. In a broader context, both the Foundation and Ibraaz are interested in examining how art contributes to the long-term production of infrastructures and institutions. In terms of our remit as such, this is primarily focused on an area broadly conceptualized as North Africa and the Middle East, but both are understood as a productive prism through which to consider art and its institutions in an increasingly globalised context. 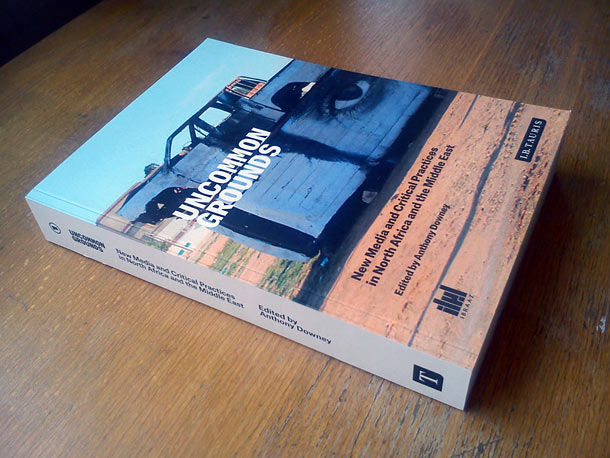 Uncommon Grounds features work by academics, writers, artists, curators, activists and filmmakers. Are there any particular contributors who captured the mood of the time frame they are focusing on?

It is arguable that they all did, as much of what is included in the volume was written as a direct response to what has been happening over the last 4-5 years; however, we were mindful that these essays and contributions could easily become fixed or reduced to a singular event, so we actively sought to produce as much historical context for the idea of new media and critical practices across the region and how it has emerged over the last two decades or so, and not just as a result of so called revolution.

If artists and writers alike are going to respond to the immediacy of events, and who is to say they should not, I would argue that we need to remain alert to how the rhetoric of conflict and the spectacle of revolution is deployed as a benchmark for discussing, if not determining, the institutional and critical legitimacy of these practices. This has became a big issue for the Middle East, with curators increasingly looking for, if not producing a demand for, images of revolution. We were therefore careful to think of the long term impact of art practices on developing spaces for further discussion and participation in these discussions. In this respect, I think essays by Laura U. Marks (‘Arab Glitch’), Dina Matar (‘A Critical Reflection on Aesthetics and Politics in the Digital Age’), Franco ‘Bifo’ Berardi (‘The Paradox of Media Activism’), Nat Muller (‘Performing the Undead’), Philip Rizk (’30 2011 is not 1968′), and Maymanah Farhat (‘New Media and the Spectacle of the War on Terror’) were very careful about the historical contexts for these debates and the need to look at what was actually happening on the ground, so to speak, without succumbing to the rhetoric of revolution that seems to have engulfed debates about cultural production across the region and beyond.

While Ibraaz’s focus is upon visual culture and media practices in North Africa and the Middle East, presumably we are right to believe that this research can act as a prism through which to elaborate upon the use of new media globally?

Absolutely, that was a key element in the editorial line that I took whilst developing this volume. Whilst it is true that events across the extended region — including the so-called ‘Arab Spring’— have informed key elements of cultural practice, for better or worse, the artists and artworks explored throughout Uncommon Grounds are decidedly not provincial in their subject matter, nor, indeed, are they localised in their ambitions. The topographical, cultural and political complexities of North Africa and the Middle East are subsequently a prism through which to elaborate upon the widespread usage of new media on a global scale, which, again, answers to one of the overarching ambition of Ibraaz and its research project.

In your introduction to the volume you say that art as a practice ‘is always already political’. What do you mean by this?

This is a tricky question to respond to briefly as its demands considerable exposition in order to do it justice; however, if we understand politics as an attempt to determine who has the right to speak, be heard or be seen in a given location or at a certain moment in time (as an overt process, in short, of legitimising and de-legitimising modes of opposition to the political orthodoxies of a given milieu), then it is interesting to note that art as a practice is also often about realigning or reconceptualising what can be seen, said or understood in particular circumstances. In this process of re-imagining or rethinking the world (or the horizons of the possible), art is already political without taking a side in a debate or having a singular political line: it encourages a field of vision that employs imagination, first, and critical engagement with the world — or at least interesting art does that. Contemporary art, I should add, and quite a signficant portion of it, can also support the current poltical orthodoxies of our time, specifically the apparent acquiescence to neo-liberal doctrine – but that is a whole other story. 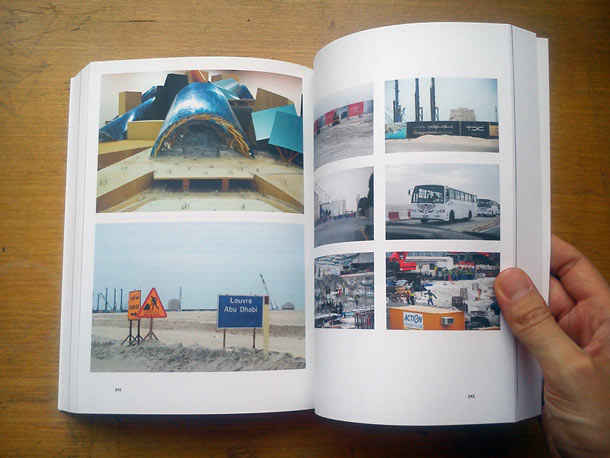 Hans Haacke’s photographs, produced for Gulf Labor (a coalition of international artists working to ensure that migrant worker rights are protected during the construction and maintenance of museums on Saadiyat Island, Abu Dhabi).

In part Uncommon Grounds analyses the popularity of Twitter and Facebook and how these platforms have been co-opted into mainstream media, institutional and curatorial characterisations of ‘revolution’. As this is an ongoing political process, do you foresee Ibraaz returning to this subject?

This is a question that is not going away, for sure, and I think it will become a concern for us in different contexts. One of my particular concerns was to examine the extent  to which the so-called Arab Uprisings quickly became rebranded as  the Twitter or Facebook revolution, begging, in turn, the question: who precisely is benefitting from this? It would be interesting to enquire, for example, into the market share increase in social media companies every time the so-called Facebook or Twitter ‘revolution’ is mentioned. It would be likewise interesting to enquire, especially after Edward Snowden’s revelations about the NSA, into whose interests are being served by so-called social media. Franco ‘Bifo’ Berardi’s essay in Uncommon Ground is a good case in point here as it offers a similar level of scepticism to the question of whether new media, specifically social media, has actually, as opposed to ideally, contributed to the democratic expression of popular revolution on a global level.

Dissonant Archives: Contemporary Visual Culture and Contested Narratives in the Middle East is out Spring 2015. What can we expect?

Dissonant Archives will pick up on some of the issues in Uncommon Grounds (digital archives, for example), but I was conscious that there was a very specific need to address the question of the archive as a contested site of knowledge production that is as much about determining the future as it is about understanding the past. In this context, the very ideal of an archive involves a degree of both response to and responsibility for the future. So many questions came up in the production of this volume, too many to go into here, but the two key ones were relatively straightforward: What is the historical role of archives and how are they being utilised by artists and institutions across the region? And what forms of knowledge are being produced by archives, both in terms of artistic and institutional practices?

On the face of it, nevertheless, these questions give rise to far from straightforward answers that go to the heart of the key issue in contemporary culture today: to what extent , if at all, does culture intersect with, question, negotiate and challenge the political and social landscapes of our time? Fortunately, we have an extraordinary line up of writers and a full spectrum of responses to these issues, including contributions from Ruanne Abou-Rahme and Basel Abbas, Lawrence Abu Hamdan, John Akomfrah and Jananne Al-Ani. ■

Uncommon Grounds: New Media and Critical Practices in the Middle East and North Africa is out now.

Anthony Downey Editor in Chief of Ibraaz and Director of the Contemporary Art Masters Programme at Sothebys Institute of Art. He is the author of Art and Politics Now and editor of The Future of a Promise: Contemporary Art from the Arab World.