Kerry Brown, author of The New Emperors, looks at the recent protests in Hong Kong under the umbrella of how, remarkably, it sheds little light into the real soul of the current Chinese leaders. 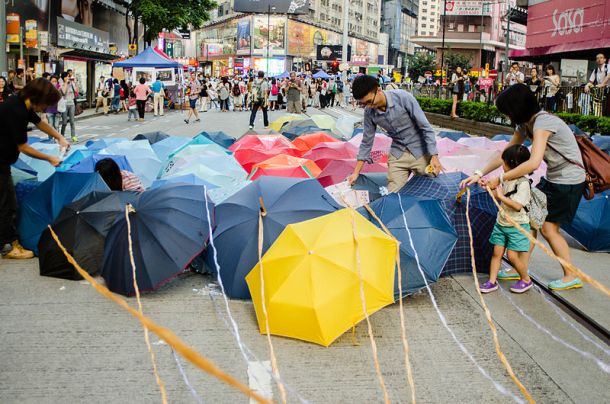 The Umbrella Revolution in Hong Kong, precipitated by the announcement of the decision on how to hold the 2017 elections for Chief Executive in September, has now sprung several leaks. The passion of the initial protests which convulsed the centre of the city, and which even heavy downpours of rain could not dampen, has evaporated. Street protests only get you so far. The activists have to engage now in the delicate art of politics and compromise. This is where either the real achievements are gained or everything is lost. Street protests belong to the world of theatre. They only make a difference if they give impetus and energy to what happens afterwards, in the establishment of long term arrangements and real outcomes.

The political vision of the leadership in Beijing about the Hong Kong issue is pretty clear. All the decades the world thought when China talked about `One country, two systems’ was on the basis of each part of this balanced clause having equal weight are now over. They were an illusion. In fact, for the Beijing leadership, there was only ever one important part of that four word phrase – the first two words. `One country’ trumps everything. And the preservation of their idea of that one country and its best future is key. A Hong Kong which would be able to march off with a political system increasingly at odds with that presiding just over the border was never on the cards.

Now both the Hong Kongese democrats, and the outside world, are relieved of their illusions, how best to deliver a future for Hong Kong in an age when the airy empty promises of its old colonial masters, the British, are no longer relevant. First of all, there has to be a shift in thinking. Like it or not, Hong Kong figures as a province in the thinking of Beijing leaders around Xi Jinping – a special province, one that has a unique status, and significant value for them, but a province all the same. In that context, it lines up with all the other issues and problems they have to deal with, from restive western provinces to fractious and demanding central ones, to placating the demands for more freedom and space of boom towns like Shanghai or Guangzhou. Hong Kongese have to think about how they relate to all these domestic issues, and pragmatically accept that they are irrevocably tied to a system that has to handle these – its success or failure in the management of this is also their success or failure. Hong Kongese have a vested interest in the Beijing government. They have to start thinking of far smarter ways of being allies in this, rather than camping outside of it and resting on loud declarations of their privileges. A sense of entitlement inherited from the British will get them no traction in China anymore, where there are far larger priorities and battles going on.

Current Chief Executive C Y Leung has been a failure in almost every respect. He has proven poor at promoting Hong Kong’s interests in Beijing, the one place where he needs to deliver – and even poorer at delivering palatable messages back in Hong Kong. That Hong Kongese at least have some form of representation in 2017 is not much, but at least it is something. A good politician could have made something of this, messaged it differently, and used it as a basis on which to build. But Leung simply wasn’t up to this. It is hard to see him having a political life after 2017.  In many ways, he is already finished.

For the protestors, they now need to think deeply about their future strategy. They have made their point, and at least proved that the myth of Hong Kong’s apolitical population can be safely consigned to a trash can. Having politicized the city, they now need to argue, mobilize and build constituencies to support developments beyond 2017. Business is important here – the one constituency the Beijing leadership probably listen to and take seriously – so having an engagement strategy with them is crucial. Framing a demand for better quality leadership in the future is all-important here, because business, political and social constituencies all want to see this. If the Xi leadership in Beijing insists on a system where only two or three people can go through and then be voted on by the electorate, then the protesters at least have the negotiation space to demand far better quality candidates than the ones that have led the city since 1997 and its reversion to Chinese sovereignty. All three of the Chief Executives so far have been disappointments. Hong Kong now has the right to ask for a better deal, and insist that the people put forward are at least up to the job asked of them – something that the current incumbent evidently is not.

Does all this prove that Xi Jinping is a strong, forceful leader? Perhaps. Perhaps not. One could argue that a really strong leader would have had the courage and vision to let Hong Kong adopt a more open system in elections after 2017, and the confidence not to fear kickback from this into the Mainland. What it does show is that, underneath all the heat and noise, Xi is as risk averse as his predecessor Hu Jintao, and has taken, at least domestically, a very safe option. If he had gone to Hong Kong and dared to explain directly to the people there what the Beijing government’s thinking was on this issue, that would have been even more impressive. At most, we can conclude that the Xi leadership is not radically different from their predecessors, but just aware of a vast menu of challenges they need to face domestically, of which Hong Kong is one of the least important. Beyond that, recent events over Hong Kong have shed little light into the real soul of the current Chinese leaders. At most it has proved what has long been known: that if you really want to see what they believe and what they want, then you cannot do that from Hong Kong but have to look at what they do over the border. In that sense, and only that sense, Hong Kong continues to occupy a unique position as the last place in China where its leaders can truly be themselves. ■

Kerry Brown is the author of The New Emperors: Power and the Princelings in China, Director of the China Studies Centre at the University of Sydney and former head of the Asia Programme at Chatham House.