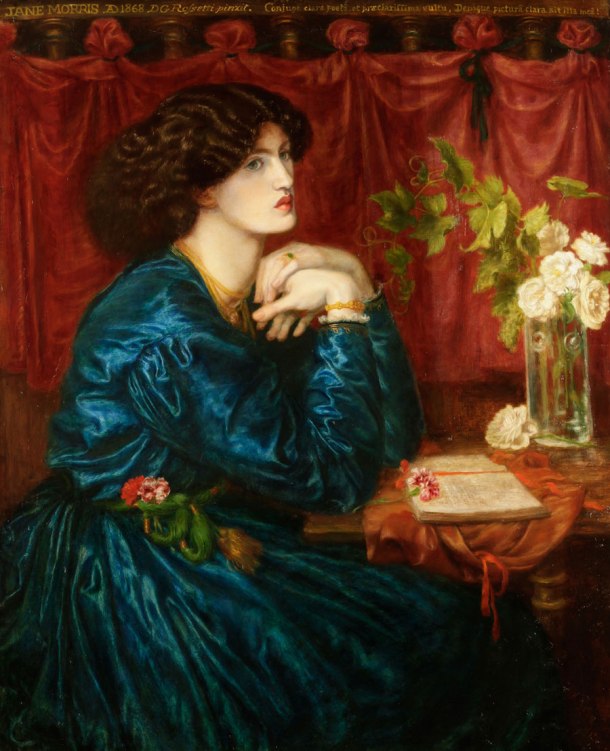 This week, a previously unknown Dante Gabriel Rossetti portrait emerged depicting his muse and lover, Jane Morris (wife of William Morris). Therefore, seeing as we are Pre-Raph enthusiasts, it seemed only natural for this week’s painting to be a previously known collaboration of the two. And with the help of our resident Pre-Raph expert  Dinah Roe, we have plumbed for this: a sumptuous love letter from artist to sitter.

It is well documented that Jane Morris and Rossetti were lovers, a romance which is believed to have begun in 1865 and lasted, in differing levels, until Rossetti’s death in 1882. Famously, the two took out a joint tenancy on Kelmscott Manor (William and Jane never divorced). Evidence of this relationship can also be found with the Latin inscription at the top of this painting. Although it acknowledges William Morris, praise is duly reserved for Jane: ‘Famous for her poet husband, and most famous for her face, finally let her be famous for my picture!’ Swoon.

Before becoming lovers, Rossetti and Jane were friends, meeting in 1857 before she became engaged to William Morris. Attending a play in Oxford at the Drury Lane Theatre Company, Jane Burden (as she was called then) was noticed by Rossetti who at the time belonged to a group of artists painting the Oxford Union murals, based on the Arthurian tales. Struck by Jane’s beauty, Rossetti sought Jane to model as Guinevere. After this Jane sat for Morris in his painting La Belle Iseult, again, posing as Guinevere. It is during this period William and Jane fell in love, marrying in 1862.

We know this is painting of the week, but if we ever start a feature called ‘love triangle of the week’, well, this will take some beating. TA

For more Pre-Raphaelites, take a look at our book Ford Madox Brown: Pre-Raphaelite Pioneer, or alternatively painting of the weeks 5 and 6.