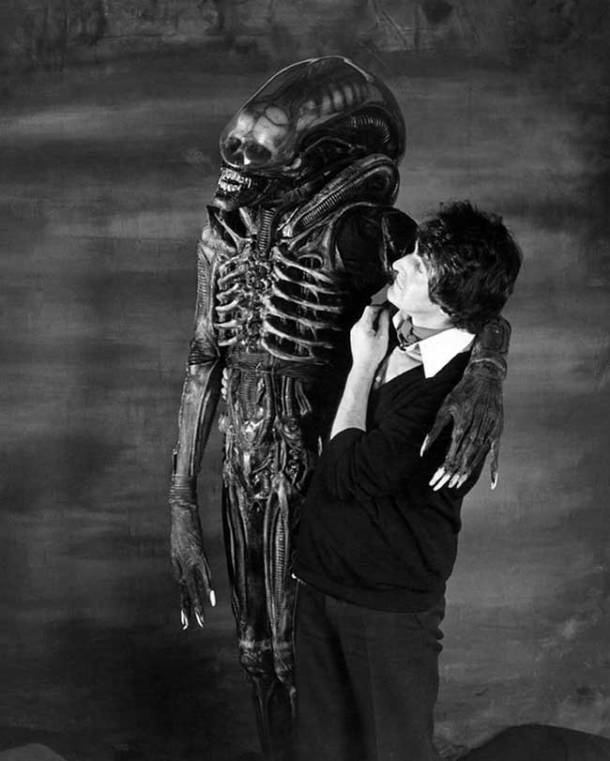 As a media and cultural studies academic and, perhaps more pressingly, a film fan, the Alien franchise seems to have been a constantly recurring aspect of my cultural experience. From television programmes to films, advertisements to augmented reality applications, frequent intertextual reference to Alien has been easily recognisable, thanks in part to the incomparable design of H.R. Giger’s ‘Xenomorph’ creature. Such has been the academic and cultural impact of Ridley Scott’s 1979 film that – as Martin Barker has recently explained – a study on audience responses to the film has been long overdue. As a result, the Remembering Alien project has been launched, designed to let people share their recollections of a fantastic piece of film history. Whether response to the film is positive or negative, or whether people have seen it once or fifty times, we are interested in hearing Alien memories from as many people as possible.

In preparation for my role as part of the research team, I began to reflect on my own responses to the film. Although my first exposure to the franchise was thanks to my parents’ fondness for Dawn French and Jennifer Saunders (and their cannily accurate film parody sketches), I first remember watching Alien itself at a friend’s house when I was around ten years old. Perhaps unsurprisingly, the moment that most sticks in my memory is the iconic chestburster scene. However, rather than being shocked by it, instead I found the scene funny. As the creature burst out of John Hurt and looked around, my friend affected a falsetto voice that asked ‘Where’s the party?’. The exact tone and intonation of the phrase made the oft-regarded horrific moment comical to me, and I still say those words out loud to myself whenever I watch the film now.

Going through this process of recollection meant that as responses to the project’s online questionnaire began to amass, I found myself particularly drawn to memories that reflected my own. The Remembering Alien questionnaire asks respondents to complete 21 quantitative and qualitative questions, the results of which we anticipate will ultimately offer a multitude of analytical approaches. As of 31st October 2012, the survey has received 938 responses, and what I found whilst looking through these is that whilst those who found humour in the film were very much in the minority, many respondents similarly reflected on the film’s suitability for children. Offering memories of the first time he saw Alien, one respondent noted:

[I saw the film on] DVD. I believe it was the Director’s Cut. I had seen [Alien vs. Predator] and thought it was awesome, but was proven wrong when comparing it to the franchises that started it all. I watched it alone, (my mother isn’t into horror and my nine-year old brother, well, kind of obvious).

The respondent here makes reference to the fact that as a nine-year-old, his brother ‘obviously’ isn’t a suitable age to be watching a horror film. Yet my experience – and the questionnaire responses of others – demonstrates that perhaps such assumptions aren’t obvious. In charting the answers to just the survey’s second question  (‘What can you remember about that first viewing?’), nearly a quarter of all respondents (23%) noted that they were children when they first watched the film. [1] Whilst such a statistic may not be telling on its own, in the context of the question asked such information becomes highly significant. The full wording of question two reads:

What can you remember about that first viewing?  Was it at the cinema, on DVD/video or on television?  Was there a particular version (like a Special Edition) that you were watching?  Why were you watching it?  Who were you with?  Tell us as much as you can!

Notably, the question does not ask respondents to detail how old they were when they first saw the film. That this information was volunteered freely and explicitly from 40% of all participants suggests that one’s age is significant when forming memories of cultural experience. Further still, of this 40%, nearly two thirds of participants indicated they were children when they first saw Alien, with just over a third being teenagers and a very small percentage being adults. Although this is just preliminary quantitative data, such statistics suggest that respondents feel that watching the film as a child – and therefore ‘under age’ – is a particularly significant cultural achievement, worthy of mention. Watching the film as an adult is the “norm” and does not warrant special attention, yet mention of childhood consumption of a science-fiction horror film is used to indicate an ‘out-of-the-ordinary’ experience. How ‘out-of-the-ordinary’ these experiences are is yet to be determined: cross-reference with respondents’ other questionnaire answers, as well as more stringent qualitative analysis will be necessary before that can be addressed. What will be interesting in further analysis of the responses discussed here is to examine how viewings of Alien were facilitated – was it the influence of friends or family members? Did parents take their children to see it in cinemas or sit with them to watch it at home? If not, how many children secretly stayed up past their bedtime to watch the film without permission?

The data presented here constitutes analysis of one aspect of one question – there are still twenty other questions with which to engage! The appetising prospect of multiple modes of engagement is what has made this project so exciting to be a part of. We hope that you’ll head over to remembering-alien.org and help to add to our growing catalogue of film memories. ■

Tom Phillips is a PhD researcher at the University of East Anglia. You can find him on Twitter @TheTomPhillips. He is also the co-founder of the newly launched Fan Studies Network, a drive to connect fandom scholars worldwide – follow FSN on Twitter @FanStudies.

[1] At present, these figures only take into account instances where an age was specifically and explicitly mentioned. They have not yet been cross-referenced with respondents’ other answers, nor have they been qualitatively analysed for data that can infer an age range (such as respondents noting that they watched the film ‘with school friends’, ‘quietly so as not to wake parents’, or ‘with my spouse’). 60% of current responses to question two make no explicit reference to age.