Painting of the Week / Tomasz Hoskins

This portrait of politician, tradesman and diplomat Sir Henry Unton (c. 1558-1596) is one of the most fantastical paintings you can see in the National Portrait Gallery in London. Instead of a still portrait which captures a person at a particular moment, this shows the full life of this Elizabethan man – from birth, through school, to war, old age and death. It depicts the full panoply of his experiences; the whole is a kaleidoscopic vision of place and time. It captures on one canvas a complete life in a bold narrative and illustrative style. Yet something about it is touchingly simple and pure. Above all it is the humanness which is most striking – in one corner Henry is a helpless child in the arms of his mother, in another he is placed like a cut-out inside an Oxford library revising for his exams, he travels across the world of the painting on horseback, oddly and charmingly oversized and doll-like, later he falls ill, and a tiny courtier weeps underneath a table as he dies in France. Each tiny panel contains a range of quiet and moving everyday observations – the white table with cut-out knives and forks next to his baby-self, the tiny wooden ship which sails up the Loire as Henry rides past on an enormous horse, the instruments and dancers at a party, the black mournful smudge of a ship which carries his body back to England.

The portrait was commissioned by Henry’s grieving wife, who had it made to its particular specifications when his body was returned to these shores. As such this isn’t just a record of how important, rich or powerful Henry Unton was. It is a record of a man at home and at play, in his study and with his family. It is suffused with the extraordinary warmth and comfort of a happy marriage – and no doubt Henry VIII looks on in envy in the next room.

The painting has been used by historians to reconstruct Elizabethan life, because of its detail. It also has a philosophical dimension. The totality of the life cycle depicted asks us to think of what our own life journey will look like. I was lucky enough to be in Suffolk this week, thinking of paths and journeys, and came across W.G. Sebald’s work on my return. He wrote about walking the bleak Suffolk coastline and about paths and time and memory. He also instructed his students of creative writing at the University of East Anglia to remember that physicists now say there is no such thing as time: everything co-exists; chronology is essentially determined by emotion. You feel this portrait is the proof of it. 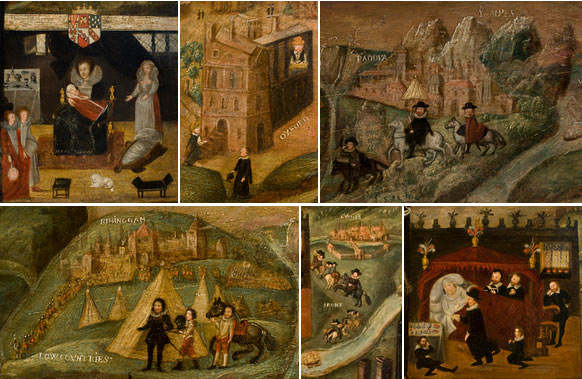 Details from top-left (clockwise): In the arms of his mother; studying at Oriel college, Oxford; travelling beyond the Alps to Venice; serving in the Netherlands in 1586; acting as resident ambassador to France; on his deathbed, in France, attended by the king’s physician, 1596.

The painting defies theories of composition and the norms of historical portraiture in general. If in every portrait there is a three-way tension, between the sitter, the artist and the viewer, then this painting has an additional eight or nine versions of the subject; a multitude of miniature Henrys engaging with the fabulous texture and detail of their surroundings. And, again, its simplicity is moving and even radical, though it was painted half a millenium ago.  I was reminded of Virginia Woolf (herself a fan of Henri Bergson’s understanding of fluid time – the philosophers got there before the physicists):

For though at this moment at least a hundred professors are lecturing upon the literature of the past, at least a thousand critics are reviewing the literature of the present, and hundreds upon hundreds of young men and women are passing examinations in English literature with the utmost credit, still — do we write better, do we read better than we read and wrote four hundred years ago when we were unlectured, uncriticized, untaught? Is our literature a patch on the Elizabethan?

Looking at the tiny Henry reading his book in his pop-up Oxford library, I wonder whether our education in art and history serve to make better art and better history-writing. Or have we killed the freedom which enables us to think in more creative ways?  Sixteenth and Seventeenth Century English authors seemed to have a radically honest and spiritual understanding of life and death and time – Shakespeare or Donne or Marlowe wrote of the metaphysical as though it were an integral part of existence – and this painting reflects that too.

Henry Unwin’s death, like all the deaths of people who are loved, needed to be made sense of by those around him, and so they commissioned a painting which would capture all his times and places, like snapshots in a family photo album. In the end, it comforts us with the simplicity and eternity of a life well lived. TH

A detailed and comprehensive study of the painting can be found at the National Portrait Gallery’s website.

Join 6,544 other subscribers
My Tweets