David Patrikarakos has written for the New Statesman on how the MH17 disaster turned a conflict global.

The downing of Flight MH17 near the village of Hrabove, in eastern Ukraine’s Donetsk region, is the deadliest aviation incident since the terrorist attacks of 9/11. Two-thirds of those killed were Dutch but people of a dozen different nationalities were on board. And as David Patrikarakos, author of Nuclear Iran, explains in his article last week for the New Statesman, ‘Ukraine’s crisis has gone global.’

‘If precedent is any guide, the downing of MH17 is a grave problem for the Kremlin. In 1983, a Russian fighter jet shot down a Korean Air Lines Boeing 747 after it flew into Soviet airspace, killing all 269 people on board. The incident provoked global outrage and strengthened the resolve of the then US president, Ronald Reagan, to defeat the ‘evil empire’. Once more, Russia’s activities have led to international condemnation. More sanctions, as well as the scrapping of a French deal to sell Moscow Mistral warships, are on the table. But Reagan is no longer in the White House and EU capitals are awash with – and reliant on – Russian cash.

The MH17 disaster is unquestionably a turning point in the conflict. The question is: in which direction? Greater international action against Russia will require a drastic change in EU and US policy and a willingness to sacrifice financial interests that has so far been lacking.’

Read the article in full at the New Statesman. ■ 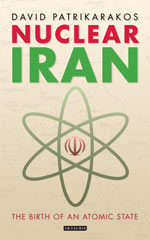 David Patrikarakos is the author of Nuclear Iran: The Birth of an Atomic State and a journalist who has writes for the New Statesman, Financial Times, the London Review of Books, Prospect and the Guardian.

Flowers at Schiphol Airport, Amsterdam in memory of the victims of flight MH17 via wikimedia.