Chelmno was the first extermination camp established by the Nazi regime and the prototype of the single-purpose death camps of Treblinka, Sobibór, and Belzec. Within days of opening, the first attempts to escape occurred. Patrick Montague recounts their ordeal. 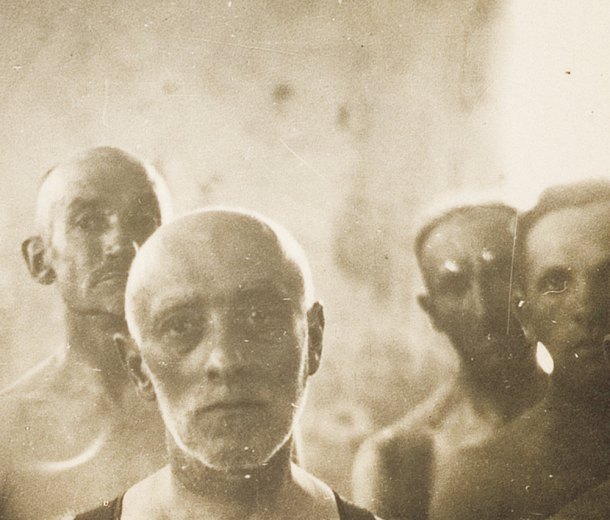 The first three escapes from Chelmno occurred days apart in January 1942, just weeks after the camp began functioning. The first to successfully escape was Abram Rój, a tailor from Izbica Kujawska, who was forced to work in the camp as a gravedigger. Rój was the first person to escape from a Nazi death camp, a fact he himself may not have realised.

On the evening of Friday, January 16, Rój and a couple of other prisoners were taken to a room in the basement of the mansion, probably the kitchen, where large meat hooks hung from the ceiling. The guards, perhaps out of boredom and for their own amusement, told the men that they were to impale themselves on the meat hooks by the time they returned and if they had not done so they would do it for them or shoot them. The guards then left the room and locked the door. The men inside became hysterical. Given a choice, Rój preferred to be shot while trying to escape rather than to die such a horrible death. The room had a small window, but large enough for him to crawl through.

Once outside the mansion Rój managed to slip outside the camp and flee to nearby woods. He spent the night in a barn and then made his way to a nearby town, presumably Kolo, but this is not certain. Rój’s precise movements at this point are not clear, although it is known he travelled to Krosniewice, some 40 kilometres east of Kolo, where he spoke with members of the local Jewish community. The news he brought about the events transpiring in Chelmno was not well received and threats were made against him. However, at least one person took him seriously. On January 21, Róza Kaplan sent a postcard to her husband in the Warsaw ghetto informing him that she had just spoken with an escapee from Chelmno. It was on this same day that news started spreading from the town of Grabów, approximately 20 kilometres southwest of Krosniewice, about what escapees from Chelmno were saying there about the fate of the Jews. After hearing that others had escaped from Chelmno, it is believed Rój set out to find them.

After Michal Podchlebnik buried his wife and children in the forest on January 13, and after Rój’s successful escape, he became determined to get out of the camp. He began to discuss the possibilities with his fellow prisoners, including Szlama Winer. The following testimony was taken at an inquest in 1945:

I noticed while going to work in the bus that one of the windows could be opened. I told my companion Winer (I don’t remember his first name) from Izbica about this and suggested that we escape. The next day on the way to work we were going to jump out of the window and escape into the forest; however, we were separated while boarding. I was placed in the truck and Winer in the bus. I decided to escape alone. When the truck was in the forest, I approached the guard and asked for cigarettes. I got them and went back to my place. Then my companions surrounded the guard also asking for cigarettes. With a sudden movement, I cut the canvas on the right side by the cab with a knife that I had hidden on me and jumped out of the truck. They shot at me, but missed. Luckily the bus was not following us, so that the shooting came only from the truck. The absence of the bus led me to believe that Winer had escaped and in connection with this, the bus had stopped. As I escaped through the forest, a civilian on a bicycle tried to stop me, shooting at me with a pistol. I escaped from him as well. I hid in a barn and buried myself in the hay. In the morning, I heard some peasants talking near the barn, saying that the Germans were looking for some Jews who had escaped. After two days during which I didn’t eat anything, I left the barn and went in the direction of Grabów. On the way, I stopped at the home of a peasant whose name I don’t know. He fed me and gave me a hat. I shaved and he showed me the way [to Grabów].

Podchlebnik and Winer had planned to escape together but were separated while being loaded into the vehicles to go to work in the forest. Winer’s testimony, from 1945, is continued here detaling his last night in the basement of the mansion:

Not having a penny to my name, I asked Kalman Radziejewski from Izbica for several marks. He pulled out RM 50 he had sewn into his clothing and gave them to me. Rój’s escape had made such an impression on me—he escaped through a basement window—that before dawn I tried to pull out a brick from the window. Again, however, without success.

On Monday, January 19, we were loaded into the bus. I let everyone get on in front of me and I got on last. The guards sat in the front. That day there were no guards following behind. On my right side was a window which opened very easily. I opened it and a stream of air rushed in. I got scared and closed the window. But my companions, particularly Moniek Halter, encouraged me. I was determined. I asked my companions, in a whisper, to stand up so that the stream of air wouldn’t reach the guards. I quickly rolled down the window, put my legs out and lowered myself down. I grasped the body with my hand and supported my feet on the door hinge. I had told my companions to close the window immediately after I jumped out. I slipped down and tumbled several times, scraping my hand. I hoped I wouldn’t break my leg. I would have rather broken my arm, because the most important thing was to run and reach the first Jewish settlement. I saw that the bus continued on. Without wasting time, I set out as fast as possible across fields and forests. After an hour, I came upon a Polish house. I went inside greeting them with “Blessed be Jesus Christ!” I asked how far it was to Chelmno. It was only three kilometers. I got a large piece of bread that I put in my pocket. As I was leaving the house, the peasant asked me if I wasn’t, by chance, a Jew. I boldly denied it and asked him why he suspected me. In response I heard, “In Chelmno, they are gassing Jews and Gypsies.” I said good-bye to him using a Polish expression and left. I continued on for an hour and again came to a Polish house. Here I was treated to white sweetened coffee and a big hunk of bread. The hosts showed me the way. I went on until I reached a German village. (German farms were easy to distinguish from Polish ones, because they were well equipped and had aerials on the roofs.) I made myself walk boldly through the village. Only at the end of it did I see a Polish house. Here, it turned out that I was ten kilometres from Grabów, where Jews lived. I introduced myself as a Polish butcher on the way to Grabów in search of work. The host sent me to a neighbouring village, to a certain Grabowski, who had a horse and cart and might give me a lift. I always kept off the roads, but at one point I had to walk along one. Suddenly I saw a military vehicle and my heart nearly stopped. I already saw myself caught by the Germans. At the last moment I grabbed a peasant woman passing by me by the arm and took her down a side road. I asked her if by chance she didn’t have some butter to sell. The vehicle passed by. I breathed a sigh of relief.

The whole time, I asked God and my parents to help me save the Jewish people. At the Grabowskis’ house, I introduced myself as Wojciechowski, going to Grabów to work. It happened that he was going to the market in Dabie. His neighbour, to whom I was sent, had already left for the market. So, I went further along the road, thinking of the bad luck that was haunting me. I asked directions along the way, avoiding sentry posts, because I didn’t have any documents. Finally, I reached a village seven kilometres from Grabów. I convinced a Polish peasant to take me to Grabów for RM 15. I put on a sheepskin coat and fur hat. We reached Grabów on Monday, January 19, at two in the afternoon.

The Jews thought I was a Volksdeutsch because I wasn’t wearing the Jewish badge, the star of David. I searched for the rabbi. I looked pretty rough. (In Chelmno we couldn’t wash or shave.) I asked, “Does the Rabbi live here?” “Who are you?” “Rabbi, I come from another world.” His look told me that he thought I was a madman. I said, “Rabbi, don’t think that I am mad or have lost my reason. I am a Jew. I was in another world. The extermination of the Jewish people is taking place. I myself have buried an entire Jewish community, including my parents, brothers, and entire family. I am completely alone.” I sobbed as I said this. The Rabbi asked, “Where are they being murdered?” I answered, “In Chelmno. Everyone is poisoned with gas in the forest and buried in a mass grave.”

The maid (the rabbi was a widower), whose eyes were swollen from crying, brought me a bowl of water. As I began to wash my hands, the wound on my right hand started to hurt. When my news made the rounds in the town, many Jews came to the Rabbi’s and I told them the details about these horrible events. Everyone wept. I ate bread and butter, drank some tea, and said a prayer of thanks. ■

Patrick Montague is the author of Chelmno and the Holocaust: The History of Hitler’s First Death Camp, a project funded by a Fulbright Scholarship into the history of Chelmno, and of which the article above is an extract from.