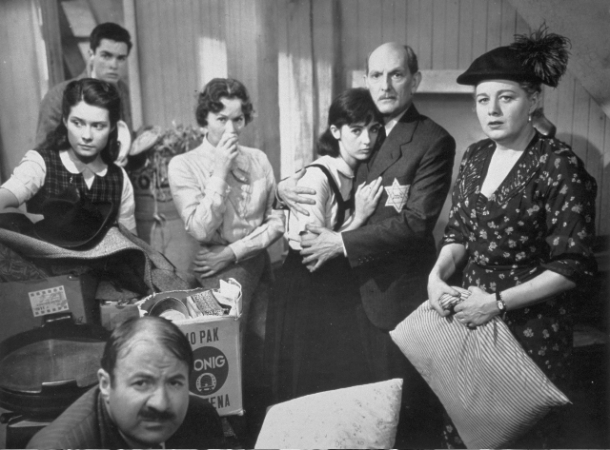 I’m looking forward to the publication of two fiction titles next month – Nathan Englander’s short story collection, What We Talk About When We Talk About Anne Frank, and Shalom Auslander’s Hope: A Tragedy, in which the protagonist discovers that an elderly Anne Frank has apparently taken up residence in his attic. Clearly, representations of Anne Frank continue to hold appeal for American writers (especially American Jewish writers, perhaps), as a means of exploring the Holocaust.

Why is this? Edward Linenthal claims that in the years immediately following the Holocaust, Anne Frank’s story constituted ‘the only widely available popular memory of the Holocaust’ in American culture. Frank was given the diary as a thirteenth birthday gift in 1942, not long before her family went into hiding in an Amsterdam annexe. For just over two years she documented her fraught existence within its pages, hopeful that her writings might eventually find publication. When the annexe inhabitants were arrested by the Gestapo in 1944, the diary was kept by Miep Gies, one of a small group of people who had supported them in hiding. After the war, Gies presented the diary to Otto Frank, Anne’s father, the only member of the annexe to survive the concentration camps.

The diary was published in the Netherlands in 1947, but it was with publication of the English translation in 1952, and subsequent adaptations in America – a play in 1955, a film in 1959 – that Frank’s story reached a large audience. Today, these adaptations are judged as faulty in three significant ways. They universalise Frank’s story, downplaying her Jewish identity in favour of making her, as Linenthal says, a tragic ‘Everyperson’, victim of generalised evil. They Americanise her – most obviously, by transforming her into an American teenager. They give her story a sentimental, optimistic ending.

However, it’s important to see these early uses of Anne Frank in context. For better and worse, Anne Frank’s story did offer one way of attempting to understand or get closer to, the Holocaust – particularly for people experientially and geographically removed from the events which were not yet commonly referred to as the ‘Holocaust’. Frank’s story still performs this vital function. Today, schoolchildren in America often learn about the Holocaust for the first time via Frank’s diary, or the play based on it. Some young adult fictions have taken Frank’s story as a basis for educating teenage readers about the Holocaust and encouraging them to think more widely about prejudice in its various forms. For example, in the now out-of-print The Liberation of Tansy Warner (Stephanie B. Tolan, 1980), Tansy gets the star part of Anne Frank in her school’s dramatic production, a role which provides her with many lessons influencing her personal development.

The numerous literary representations of Anne Frank counter Linenthal’s view that the sentimental Broadway representation constitutes the only way she is known in America. Philip Roth writes about Anne Frank in several novels, most notably in The Ghost Writer (1979), which addresses (and adds to) the controversies about her representation. Both Roth and Auslander’s Anne Franks are angry and embittered, far from the generally sweet and innocent Anne of the adaptations. In Anne Tyler’s Breathing Lessons (1988) and Danzy Senna’s Caucasia (1998), one female character tells another ‘you look like Anne Frank’, exploring the possibilities of empathetic identification Anne Frank seems to enable. Joyce Carol Oates refers to Frank in Mother, Missing, (2005), as a means of considering the banality of evil in twenty-first century America. Anne Frank appears in many American fictions as a means of exploring inequalities relating to gender, race, and sexuality. Fictions which use Frank for these purposes (and the texts listed here constitute only a small sample) suggest (controversially) that the Holocaust can be explored in careful relation to other social and cultural events.

Sue Vice notes that fictions about the Holocaust are always controversial. The uses of Anne Frank in American literature can be regarded as both adding to and detracting from study of the Holocaust. Frank’s story, so abruptly cut short, invites continued interpretations, continued efforts to fill the gaps in our knowledge of the Holocaust, despite the impossibility of knowing. ■

Dr Rachael McLennan is lecturer in American Literature and Culture in the school of American Studies at the University of East Anglia, UK. She is the author of Developing Fictions: Adolescence, America, and Postwar Fiction (Palgrave, 2009).