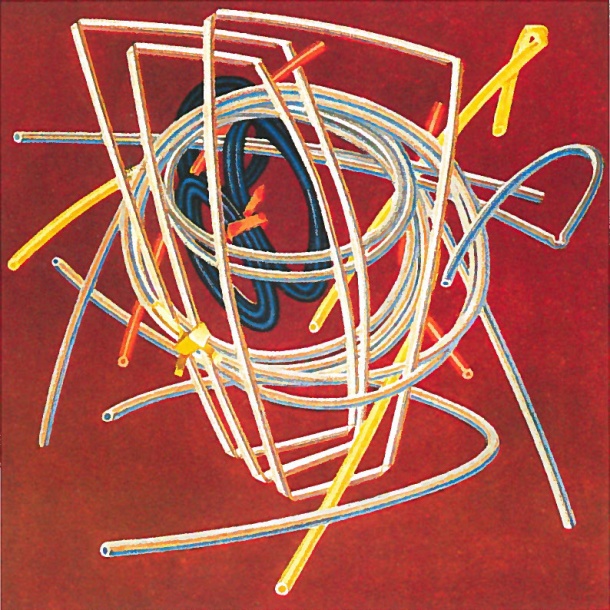 Edward Wadsworth was a major figure in British art during the first half of the twentieth century. In 1913-1914 he helped found the London Group; in 1914, alongside Wyndham Lewis, he was a leading member of the Vorticists; in the 1920s he was influential in the rappel á l’ordre and neue sachlichkeit movements, and in the the 1930s he was a founder member of two radical pro-abstraction movements: Unit One and Paris-based Abstraction-Creátion.

Brief Wikipedia-like bio aside, we’ve been having technical difficulties in the office this week, with our server appearing to meltdown into something resembling electrical fondue . After a few minutes of painstaking research I discovered that in 1949 Wyndham Lewis bestowed upon Edward Wadsworth the epitaph of ‘the genius of industrial England.’ Therefore, while we try to locate various files, and, dare I say it, untangle the mess – Wadsworth’s abstraction from the early ‘40s seemed relevant, and a perfect visual metaphor.

As an aside, Wadsworth’s use of tempera should be mentioned. Slipping back into wiki-mode, tempera painting involves using egg yolks (or anything glutinous) as the binding agent for powdered pigments mixed with water rather than oil. This means it dries extremely quickly, leaving virtually no allowance for correction, alteration or hesitation once a composition has begun. Corrections will be visible and will spoil the final surface appearance of the work. Basically, one false move and the artist’s work is, as they say, done for. So ironically, given that Wadsworth’s work is often pre-occupied with engineering, and could paint without correction, his use of tempera means the term ‘well-oiled machine’ can’t be applied (which this writer found a shame).

And one more thing, Wadsworth’s dazzling ship prints and drawings of 1917-1918 help explain the course of Bridget Riley’s early ventures into Op Art, such as her 1962 Movement in Squares, significantly painted in tempera.  TA

For more about Edward Wadsworth, check out this book. We’ve sold out, but I bet it’s available on Amazon.