With increasing pressure to provide entertainment, how does this affect our gallery and museum going experience? 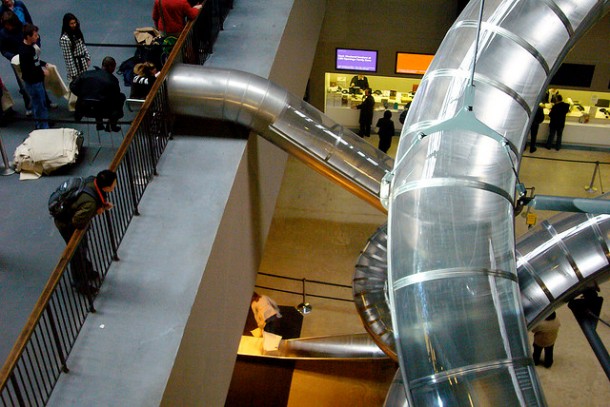 A consensus is forming on the fact that the traditional contours and functions of art and the art museum are either changing or being challenged, depending on your point of view. See for example articles in the New York Times this past year by Randy Kennedy and Judith Dobrzynski.

One idea is that the social and economic phenomenon of ‘the experience economy’ – a pre-bubble term of the late 1990s – has hit the museum institution. The experience economy is apparently evident in new developments like Chuck E. Cheese restaurants or the new Las Vegas, where the consumer is offered an ‘experience’ that is more than a good or service—meaning, the good/service is wrapped in a thick layer of ‘entertainment.’ This is low-end entertainment that’s more like strolling through an amusement park or video arcade than hearing Adele sing or Louis CK tell jokes; it’s entertainment that mostly has to do with the playing of games, as Roger Callois broadly defined them. The experience of the experience economy is participatory, we are told, and takes place in ‘social spaces.’

In one example of the art-institutional staging of ‘experience,’ Dobrzynski takes offense at the New York showing of Carsten Höller’s slide piece, involving a giant slide that visitors could use (realized in the Tate Modern turbine hall in 2007). It makes sense to me to have a hard time with the propositions of Mr. Höller, whose art has to do with testing the art world’s current norms of spirituality and phenomenology (among other things). Dobrzynski wonders if art museums shouldn’t mount some resistance to the pressure to become yet another hub of the participation experience.

But the ‘experience economy’ museum also has to do with a push for museum attendance, one strategy toward making traditional high art institutions in the visual arts sustainable. After decades of dismantling of Great Society programs in the U.S., and the accompanying dwindling of state and federal support for the arts, the public art museum needs a wider clientele to continue to exist. The old support net, once funded by the art philanthropy of a Carnegie or Getty, has been replaced by Russian oil tycoons or mutual fund barons who almost exclusively collect contemporary art, are devoted to tax write-offs, and who could care less if the old civic art museums of the U.S continue to exist or not.

Personally, I’m not so bothered by the diversifying of the base for art museums that’s going on in the name of participation, even if those spaces are becoming almost intolerably family friendly. A major function of art museums now is to serve as the destination for children’s grade school fieldtrips and weekend activities. In the end it’s not so bad when a family of four eating a pizza shows up at the door to the Met (as an offended NYT reader noted). They are the new audience for contemporary, but also traditional, art, and they are sorely needed to keep these institutions going. ■ 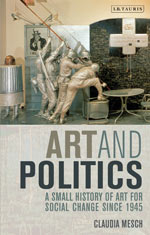 Claudia Mesch is Associate Professor at the School of Art, Arizona State University, and her new book, Art and Politics: A Small History of Art for Social Change Since 1945, is out now.