The Allied forces bombing of Dresden is identified as one of the most controversial acts of World War II, but the politics about how to remember the destruction in Germany has become increasingly contested terrain. 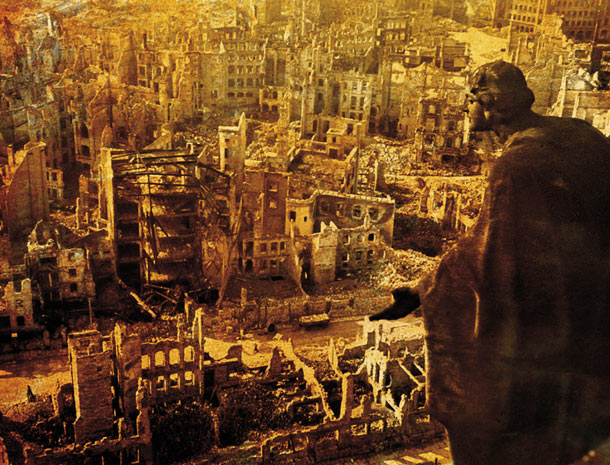 In 1802, Johann Gottfried Herder, residing in nearby Weimar shortly before his death, was moved to write in reference to Dresden: ‘Bloom, German Florence, with your treasures of the art world!’ (‘Blühe, deutsches Florenz, mit Deinen Schätzen der Kunstwelt!’) The popularized version, Elbflorenz (‘Florence of the Elbe’), soon embodied Dresden’s standing as Germany’s most internationally renowned city of art and high culture (Kulturstadt). Its reputation for artistic opulence and architectural grandeur was so pervasive that not even five years of total war and Nazi barbarism prevented some enemy quarters from publicly articulating hopes that this particular German city would survive unscathed. With impeccably bad timing, an editorial in the Manchester Guardian declared on 12 February 1945: ‘We may hope the Saxon capital is spared the worst. Only Germans need care for Berlin, but Dresden, with the charm of its streets and the graciousness of its buildings, belongs to Europe.’ Within 48 hours, an Anglo-American ‘triple-blow’ bombing raid and resultant firestorm immolated the hitherto intact Elbflorenz.

On 13-14 February 1945, a combined total of 1,083 aircraft operating in three waves dropped approximately 2,000 tons of high explosives and around 1,500 tons of incendiaries onto Dresden over some fifteen hours. Such figures may sound impressive, but actually they were by no means excessive in comparison with other major raids conducted by Royal Air Force (RAF) Bomber Command and the US Army Eighth Air Force towards the war’s end. Indeed, the attack on Dresden was a rather typical mission in terms of its scope and planning. An unusual, and unpredictable, confluence of mitigating factors—both in the air and on the ground—led to this particular operation culminating in arguably the single most devastatingly effective raid of the European bombing war. It is important to stress, then, whereas the Dresden raid proved to be exceptionally destructive, it was not exceptional by design.

Well over 100 German cities and towns of varying size and military-industrial significance were badly damaged if not more or less wholly destroyed during the course of the Western Allies’ strategic bombing offensive. And yet, even before the war concluded, Dresden’s fate already was garnering an international reputation as being somehow altogether different. Early reports in some quarters of the neutral international press, misguided by specious information disseminated by the Nazis, spoke of the Dresden death toll possibly reaching as many as 400,000 victims. Behind closed doors, even Winston Churchill, one of Bomber Command’s staunchest political advocates at earlier stages of the war, raised concerns. By way of a confidential minute dated 28 March 1945, the British prime minister and war leader informed his Chiefs of Staff Committee that he believed the moment finally had arrived to reconsider the ‘bombing of German cities simply for the sake of increasing the terror, though under other pretexts… [or] otherwise we shall come into control of an utterly ruined land.’ Requesting that Bomber Command’s attention be shifted from population centres to military objectives, Churchill argued that it was now better to focus on oil and communications immediately behind the frontlines ‘rather than on mere acts of terror and wanton destruction, however impressive.’ He mentioned only one attack specifically, exclaiming: ‘The destruction of Dresden remains a serious query against the conduct of Allied bombing.’ Even before VE-Day, the Dresden raid was being identified as one of the most controversial episodes of the entire war. Why?

Five interlocking factors account for why the Dresden firebombing often has been divorced from the rest of the civil death and destruction wrought by the Western Allies’ strategic bombing offensive, and has been widely recognized as an especially tragic event that somehow transcends all other German wartime loss and suffering: first, the prewar international appreciation for Dresden as a refined city of high culture (Kulturstadt); second, the Allies’ motivations and the decision-making process leading up to the attack remain cloaked in mystery; third, the lateness of the raid on a hitherto virtually ignored city combined with the unmistakably civic target area  raise serious questions about the operation’s military-strategic justification; fourth, the devastating effectiveness of the bombing raid and subsequent firestorm; and, finally, the unconfirmed but certainly high death toll.

Dresden, shorn of its prestige as a leading European Kulturstadt and reduced to rubble overnight, became saddled with a new and unwanted identity as the German Opferstadt. The German noun Opfer can denote either ‘victim’ or ‘sacrifice,’ and Dresden suited both connotations as a victimized city that was sacrificed late in the war. On the one hand, the victimization angle of Opfer showcased how Germans had not only perpetrated but also endured episodes of wartime loss and suffering on epic proportions. On the other hand, the sacrifice aspect of Opfer reminded Germans of the heavy price ultimately paid for the nation embracing Hitler’s hubris before being forced to share in his nemesis. Dresden exited the war as a ruinous wasteland and entered the immediate postwar period as the quintessential German Opferstadt.

Located in what became the German Democratic Republic, Dresden’s controversial wartime destruction at the hands of Anglo-American ‘terror-bombers’ and ‘warmongering imperialists’ was grist to the mills of East Berlin’s communist propaganda for much of the Cold War. Major commemorative programs were scheduled in Dresden on the anniversary of its destruction, especially on the occasion of ‘milestones’ such as the 10th, 20th, and 40th anniversaries in 1955, 1965, and 1985 respectively. Following reunification, such anti-western and anti-capitalist rhetoric suddenly became redundant, and soon was replaced by a new discourse cultivated around German-British reconciliation as epitomized by the rebuilding of the city’s Frauenkirche (Church of Our Lady). Over time, however, remembering the destruction of Dresden became increasingly contested terrain as the Berlin Republic witnessed a resurgent victim culture (Opferkultur) concerned with remembering war-related loss and suffering inflicted upon, rather than caused by, Germans. In direct opposition to the popular pursuit of Dresden-inspired reconciliation, neo-Nazis and other disaffected rightists seeking ways to negate German responsibility for war crimes and crimes against humanity latched on to the city’s destruction as a moral counterweight—as if the rubble of Dresden somehow atoned for the gas chambers of Auschwitz-Birkenau. By 2004, neo-Nazis were even publicly defining Dresden as a ‘Bombing Holocaust.’ For the past decade or so, scenes have been quite ugly in central Dresden around mid-February: large crowds of neo-Nazi demonstrators converge on the city and (mis)appropriate the memory of its wartime immolation for contemporary political ends; in equally large numbers leftists and anarchists also travel to Dresden in order to counter-demonstrate against the neo-Nazis. Locals, understandably given their city’s history, yearn for peace and in a witty play-on-words openly declare in candlelit messages each February 13th that Dresden is ‘fed up with Nazis!’ (Diese Stadt hat Nazis satt!)

In the early 2000s, amid a veritable explosion of interest in war stories centred on the themes of bombing and expulsion, it was widely claimed in the English-speaking press that some supposed ‘last taboo’ was being broken. Apparently, Germans were finally coming to terms with publicly articulating their own wartime loss and suffering. All such claims were wildly misguided, however, for dating back to the immediate postwar period Germans had openly confronted such themes. As the case of Dresden illustrates, moreover, this trend survived the nation’s political division into two states and even thrived during the Cold War before taking on new dimensions in the wake of reunification. Dresden, then, is a most illuminating case study of how this alleged ‘last taboo’ about publicly discussing the theme of Germans as victims was nothing more than a myth.

For more than two centuries, Saxony’s capital—the world-renowned Elbflorenz—was celebrated as an exquisite European Kulturstadt. For how long will Dresden continue to be commemorated as the quintessential German Opferstadt? ■ 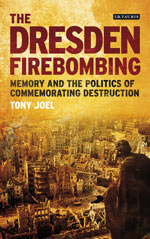 Dr Tony Joel is Senior Lecturer in History and Associate Head of School (Teaching and Learning) in the School of Humanities and Social Sciences, Faculty of Arts and Education, Deakin University, Australia. A former DAAD research scholarship holder, he is the author of our new book The Dresden Firebombing: Memory and the Politics of commemorating Destruction.