Michael Seymour / Painting of the Week

Early European artistic images of Babylon or Babylonians are often concentrated around episodes from the Book of Daniel, one common subject being Belshazzar’s Feast, where the Babylonian king Belshazzar profanes the sacred vessels of the enslaved Israelites. As prophesied by the writing on the wall, and interpreted by Daniel, Belshazzar is killed and Darius the Mede succeeds to his kingdom.

Typically such images showed the king’s more or less orientalised banqueting hall, guests and sometimes the writing on the wall, but by far the most famous and important example is in almost every way atypical: Rembrandt’s masterpiece Belshazzar’s Feast (c.1636 – 8) has much more to do with the artist’s unique religious vision and approach to the representation of history and the Bible than with the art of his contemporaries. Rembrandt’s huge canvas focuses tightly on Belshazzar himself, revealing only a small group of bystanders and a single table from the great feast. Belshazzar, recoiling, stares in horror at the writing on the wall as it appears before him. He is dressed in an orientalising costume that was almost certainly copied, along with the king’s pose, from a Pieter Lastman painting of Esther and Ahasuerus.199 Other figures in the painting also have models in earlier paintings, [1] though Belshazzar’s is the only one to feature an oriental costume of any kind. Rembrandt took no part in the wave of interest in Persian costume then current among Dutch painters, nor in the vogue for Turkish costume that had preceded it. His major source of ‘oriental’ costume was probably the Jewish population of Amsterdam, alongside, as here, figures in other paintings. In truth, all treatment of historical accuracy in terms of material culture seems utterly irrelevant here. The elements that matter are Rembrandt’s portrayal of the king, his personality, his emotions, and of the divine writing itself.

The painting’s inscription has been the subject of much debate. Written in Hebrew characters, it contains the Aramaic inscription mene mene tekel upharsin. Its format, however, is highly peculiar, arranging the letters not in horizontal lines but vertical columns. Attempting to read the inscription normally, i.e. in horizontal lines right-to-left, produces nonsense. The device is a response to a scholarly problem arising from the Daniel account of the incident: why, in the court of the king of Babylon, could only one person (Daniel) not only interpret but even read an inscription given in the Near Eastern lingua franca of Aramaic? The solution of vertical columns can be traced to the Babylonian Talmud, where it is attributed to Rabbi Samuel, and was probably given to Rembrandt by the famous Amsterdam Rabbi Menasseh ben Israel. [2]

In one sense, then, the painting is very scholarly, but its purpose is not to mystify and its central, emotional meaning is immediate and direct. In the figure of Belshazzar Rembrandt captures the mixture of alarm, fear and guilt that are the real subject of the painting. This is an encounter with the divine whose human dimension was of great importance to Rembrandt, as would also be the case in many of his later biblical works. Lit by the writing on the wall, the skin tones of the king break with artistic convention: where normally cold and warm tones are alternated, here Rembrandt uses exclusively warm tones, contributing to the work’s theatrical quality. The king’s pose, at once turning towards and pulling away from the writing, causes his figure to fill a large part of the canvas, physically dominating it and contributing to the movement as the surrounding figures also react to the apparition. [3] The king himself is middle-aged and his face lined. Rembrandt offers a Belshazzar who is careworn, strangely ordinary for all his pomp. This is a picture of a rich and powerful man discovering his own ruin, and of the power of God over mortals. Just as much as Bruegel, Rembrandt is an artist concerned with the meaning of his historical subject in the present. MS

This article is an edited extract from Michael Seymour’s new book Babylon: Legend, History and the City. 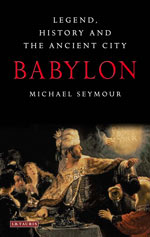 Michael Seymour is author of a Research Associate in the Department of Ancient Near Eastern Art at the Metropolitan Museum of Art, New York. He is co-author (with I.L. Finkel) of Babylon: Myth and Reality (2008).

[1] The figure at right is drawn directly from Veronese’s Rape of Europa of 1580 (Starcky 1990: 74). The most prominent of the figures in the left-hand group is a portrait of Rembrandt’s wife Saskia.

[2] Evidence of Rembrandt’s association with Menasseh is hotly disputed, and indeed the Belshazzar’s Feast inscription itself has been the focus for much of this debate. Alternative Christian sources for the inscription have been proposed (Schwartz 2006, 2011); however, my colleague Irving Finkel and I can now offer what we believe is compelling evidence that Rembrandt consulted a Jewish scribal source, in all probability Menasseh ben Israel (Finkel and Seymour) in preparation.

[3] The impression that the table itself is tipping, and a generally increased sense of the figures recoiling from the writing, owes to the fact that the painting has at some stage been cut down and its orientation slightly changed (Bomford et al. 2006: 113 – 14).